COVID-19  In-depth info for Indians in Atlanta/Georgia. Click here
Home > Magazine > Around Town > Muslims “Say NO to Terrorism” at the Decatur Book Festival

Muslims “Say NO to Terrorism” at the Decatur Book Festival 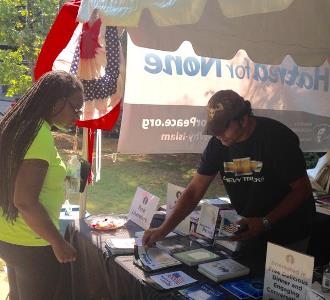 On Labor Day weekend, Decatur held the largest independent book festival in the country. And in true American tradition, the Ahmadiyya Muslim Community, one of this country’s most dynamic proponents of peace, voiced the real and peaceful character of a religion that has all too often been hijacked by the horrific acts of disturbed fanatics.

Everyone appeared in good spirits at the tenth anniversary of the festival in Decatur’s historic downtown square, despite the heat. Many visitors stopped by to discuss religion or just express their appreciation for the motto: Love for All, Hatred for None. They also expressed appreciation for the free water, free literature, and candies for the little ones. 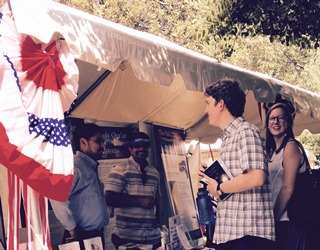 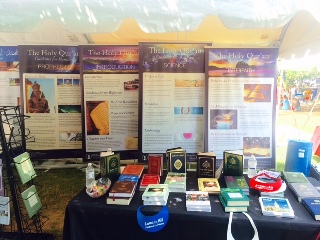 While the main purpose of the booth was to inform the public that the long-awaited Messiah, Mirza Ghulam Ahmad (1835-1908) of Qadian, has arrived to fulfill his role as the Messiah and Mahdi for all religions, the booth also displayed books on the Ahmadiyya sect of Islam and translations of the Quran. The Ahmadiyya Muslim Community has the honor of being the first American-Muslim organization in the United States.

It would be fair to say that this Community has a special affinity for the word, because it must be noted that in the first 1400 years after the advent of Prophet Muhammad (Peace be upon him), the number of Qura’nic translations was under ten, yet the Ahmadi Muslims bear such a love for the Qur’an that it has been painstakingly translated into a total of 74 languages.

What is special about the Qur’an? It is an exact record of what the archangel Gabriel recited to Prophet Muhammad (pbuh). Consequently, great respect is due to the translators who must duplicate its meaning perfectly. 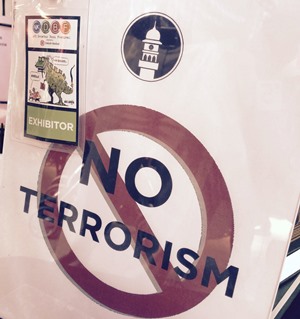 At the Book Fair, the Ahmadiyya Muslim Community handed out ‘Muslims for Peace’ and ‘Muslims for Loyalty’ flyers to inform the public that this community represents the true Qur’anic values.

Even though Mirza Ghulam Ahmad preached that the greatest jihad is one’s personal struggle with desire, not a jihad which involves a sword, many Americans still seem unaware of the fact that this one sect truly believes that mankind can establish peace on earth. The majority of visitors wished to buy a Qur’an, since the true teachings of Islam appear to be shrouded in mystery.

In Atlanta, the local Ahmadiyya chapter regularly leads its members to volunteer their time and effort to be involved in projects and events that unite, not divide. These include sponsoring and helping Blood Donation Drives, volunteering at the Peachtree Road Race, organizing Interfaith discussions to promote mutual understanding, and helping the needy for Atlanta Food Drive campaign. On Labor Day weekend at the downtown Decatur Square, Ahmadiyya Muslim Community members shared these success stories, and built further relationships through meeting and talking with festival-goers. The spirit of the event, a free exchange of expression in the literary arts, embodies the essence of how the Ahmadiyya Muslim Community strives to deliver the genuine and fundamental message of Islam: harmony, affection, equality and justice.

For those who could not make it to the Book Fair, all books are still available online at: www.ahmadiyya.us.