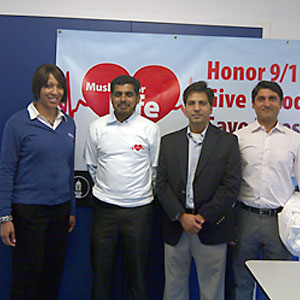 Photo: The Red Cross Blood drive at Georgia State University on September 27th was one of many where Muslim community members volunteered and donated blood in honor of 9/11 victims.

“When in 2010, Faisal Shahzad tried to detonate a bomb in NYC’s Time Square, we thought enough was enough and something must be done in defense of True Islam,” said Mr. Naseem Mahdi in his Washington Post article “Muslims for Life.” Mr. Mahdi is the National Vice President and missionary-in-charge of the Ahmadiyya Muslim Community U.S.A (AMC-USA). Established in 1921, AMC-USA is the oldest Muslim presence in the U.S.A. with 71 chapters.

Mr. Mahdi is leading the campaign “Muslims for Life” to honor 9/11 victims by holding blood drives all across the nation on the tenth anniversary of that horrific day when 3,000 innocent lost lives were lost. The target was set to collect at least 10,000 pints of blood to save 30,000 lives.

The campaign kicked off on September 1st with a press conference in Washington D.C. where Mr. Mahdi stated, “The barbaric terrorists who attacked our country 10 years ago do not represent Islam or Muslims.” “Islam values all human life and fundamentally stands for peace. Through this campaign, we illustrate that the only blood we shed is to save lives.”

With a total of 275 blood drives registered in 168 cities across the nation, people from every walk of life showed great support to this initiative allowing AMC-USA to reach its nationwide goal a week prior to the deadline of September 30th.

A total of 16,000 congressmen, law makers, mayors and other public representatives were contacted through letters regarding this campaign. Congresswoman Sheila Jackson Lee (D-TX), who issued a one-minute statement from the House of Representatives floor about this campaign, participated in the September 9th blood drive and offered her support for the AMC’s work towards establishing peace and serving humanity. “To all those who wonder how Muslim Americans have responded to the horrific attacks of 9/11, they need only to look at this campaign,” Rep. Lee said. “What an inspiring effort to honor those who have fallen, and I am privileged to stand by those who give their blood to save lives.”

In an interview with Rick Badie of Atlanta Journal Constitution, AMC-GA Chapter President, Mr. Hazeem Pudhiapura conveyed that Islamic terrorists did more than hijack planes and kill thousands on Sept. 11, 2001. They stole something else, too. “They also hijacked Islam from mainstream Muslims,” said Pudhiapura. “We want to take that back from these terrorists and return it to those who are promoting sanctity, peace and loyalty.”

Flyers were distributed throughout September to create awareness among the general public. Most people appreciated the campaign, although a few skeptics were not open to the idea of a peaceful engagement from a Muslim Community.

“We are humbled by the public response and want to convey our deepest gratitude to the people of Georgia who got our message and donated as Americans without any regard of race, color, or religion. It is a great feeling to know that we are surrounded by such kind people,” said Mrs. Mahmooda Rehman, President of the Women’s Auxiliary, AMC-GA Chapter.