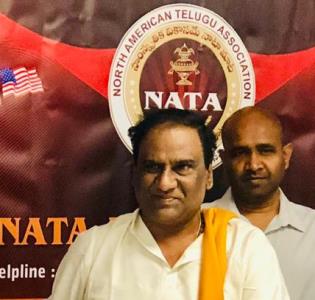 Born in 1955 in Meduru in Krishna District, A.P, India, Gummadi Gopala Krishna took to acting from a young age. He has acted in hundreds of performances in the main roles, and has rendered direction, music, and sets in plays throughout India and abroad. With his befitting figure, high histrionic talent, musical voice, and literary understanding, he has become the front line theatre personality with tremendous talent and versatility. He is a Nandi awardee; this is the highest award for excellence in Telugu cinema, Telugu theatre, Telugu television, and lifetime achievements in Indian Cinema.

Gummadi Gopala Krishna’s roles have included mythological and historical figures from tretayugam (Lord Rama), dwaparayugam (Lord Krishna) and bhagavatham (Lord Vishnu). In this program, on his second visit to Atlanta, he included the Mahabharata, Ramayana, Satya Harischandra, and more.

Padyam is a poem or story of Telugu poetry. In Telugu drama, poetry becomes part of the action and dialogue delivery, adding a classical touch to the art. In mythological movies, communication between the kings is often with poems. Sri Gopala Krishna is the founder General Secretary of Sri Satya Sai Kala Nikethan and trains youth in Padya Natakam. 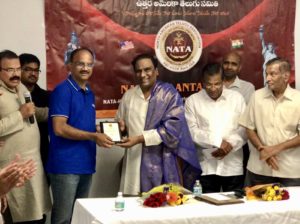 Rangasthalam means stage, and most of the old movie actors came from stage experience. Now slowly traditional Padya Natakam stage dramas are fading out because of not much encouragement. This program and future ones that NATA plans to hold in conjunction with other Atlanta associations such as TAMA, GATA, and GATes, will help to keep the tradition alive.

Sri Gummadi Gopala Krishna being felicitated, with Bala Reddy Indurti (on his left), Ravi Ponangi (R), and others.


A felicitation of the artist
https://www.youtube.com/watch?v=WbSa25nioFk