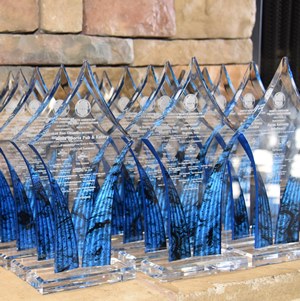 The NATA (North America Telugu Association) Atlanta team organized its 3rd annual golf tournament on May 5, 2019 at Bears Best Golf Club, Suwanee, Georgia. Led by Srini Vangimalla, it had 80 players and 19 team sponsors. As part of the membership drive NATA Atlanta team signed up 355 families as members including one Diamond, 6 Gold, 10 Silver, and 338 new life members.

Chief guest Consul General Swati Kulkarni spoke about the 400 thousand Indian Americans living in the Southeast. A large number are of Telugu origin and most are IT professionals. Among the 120 thousand Indian Americans around Atlanta, many are Telugus and Gujaratis. “I have seen many organizations,” she said, “and NATA is doing phenomenally good work,” including much community service. The Farmington University scandal is an example. With the help of NATA, the consulate staff redressed that issue so nicely. Now, only two students remain and that will also be addressed quickly. The Consulate was thankful for the lawyers that the community provided. Two or three people from NATA worked diligently with the Consulate. Families in Andhra and Telangana and NATA representatives complimented the Consulate on the work, and in turn she applauded the work of NATA. She exhorted the audience to help in spreading awareness, so that Indian Americans keep our good reputation, as we are the top most country sending top most graduates, top most IT graduates here. She also encouraged NATA’s good work in giving back to the homeland in projects such as health, water purification, etc.


On a lighter note, Consul General Kulkarni joked, saying, “I don’t know anything about golf. I am not in golf dress. It is an expensive way of playing marbles, as someone says.”

You can always learn something new about Gandhi, she said, and his message will always inspire a new global audience. When Richard Attenborough’s movie Gandhi was released in Chile in 1983, it inspired antifa movement to overthrow the Pinochet regime. It also inspired people to overthrow the dictatorship of Ferdinand Marcos in the Philippines. His message is so profound and electrifying.

She also invited the community to attend the International Day of Yoga celebration on June 23. Yoga is one of the stress busters, she said, so let us make sure that our soft diplomacy works.


After rounds of golf, the attendees sat down to a fantastic dinner sponsored by ADDA Indian Cuisine and Sports Pub. NATA Executive Vice President Bala Reddy Indurti thanked all those who supported and especially thanked those companies who had sponsored Foursome teams and title sponsor Patel Brothers. He also thanked all RVPs, RCs, and standing committee chairs who made the membership drive successful by adding a record number of new memberships.

Thanks:
Golf Organizing Committee lead by Srini Vangimalla, Ramesh Chaparala, Rajasekhar Aila, and Sudhir Edara helped put together a great event and the amazing help of Kodandaram Reddy Devarapalli, Rajesh Tadikamalla, Venkat Meesala who worked the check in table, set up the banners and awards presentation.