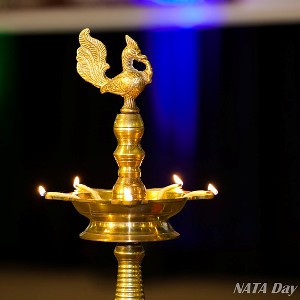 North American Telugu Association (NATA) celebrated its inaugural fundraiser event, NATA Day, in the 2014 Convention host city Atlanta, GA with pomp and grandeur on Saturday Feb 22 evening at the sprawling venue of the Lanier Technical College Forsyth Conference Center. A record amount of $434,000 was raised—a new record for contribution from a single city in one day in the 30 year history of the nonprofit organizations. NATA 2014 Convener, Bala Indurti, attributed this unprecedented success to the Telugu community of Atlanta. He also expressed his gratitude to the local Telugu associations TAMA and GATA, for their complete support in helping the Atlanta team achieve this spectacular accomplishment. He thanked all participants from national and local organizations TANA, NATS, TCI, AmrutaVarshini, Vibha, Maitri, Isha Yoga, ArtOfLiving, Hindu Temple of Atlanta, Sai Temple of Atlanta. 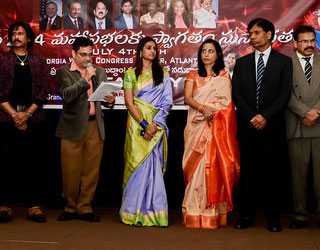 The biennial NATA convention, held once in 2 years, is expected to welcome over 10,000 people of Telugu origin to the GWCC convention center in downtown Atlanta during July 4th – 6th. The convention will be transmitted live through many leading TV channels to millions across the US, Canada, and India. NATA leaders Dr. Prem Reddy, Dr. Malla Reddy, and President Dr. Sanjeeva Reddy are working tirelessly to guide preparations.

Atlanta-based global software solutions provider Paramount Software pledged $50,000 as a Corporate Grand Sponsor for the 2014 Convention. This unparalleled act deserves special recognition to Pramod Sajja, Paramount’s CEO. Also, Grand Donors pledged $25,000 and above, and other donors $10,000 and above. There were 15 donors with $5000, 27 donors with $2500, and 36 donors with $1000 pledges.

The NATA culture of positive thinking and cordiality was evident in the informal and warm way the leaders greeted all of the attendees in a fun filled atmosphere with respect towards all. The cordial camaraderie and strong rapport between the various teams, the dynamic activities of these members, the positive energy that effuses from this charged atmosphere together leave no doubt that NATA 2014 convention will set a new mark for entertainment and progress.

Shri Srinivas Nimmagadda deserves a special mention for his yeoman efforts in arranging Georgia Governor Nathan Deal as the chief guest for the convention.

The NATA Atlanta team, in turn, is grateful to Dr. Sanjeeva Reddy and Sreedevi garu for their encouragement and guidance on all aspects by taking the time to be with the team in Atlanta through all major events.

A special note of thanks goes to Atlanta Mayuri restaurant for their delicious food and excellent service, which was not compromised in any form or fashion in spite of the record turnout of 600+ guests, which was much more than the anticipated 400.