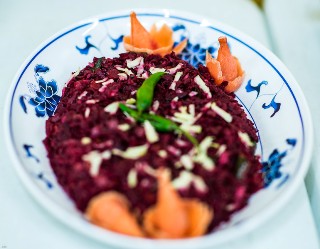 Generating a lot of buzz and excitement was the Healthy Recipe contest. Winners were:

Celebrity guests, Ramu Maharajapuram from India and Sarada Akunuri from Houston, earned special commendation: their huge talent and fame notwithstanding, both celebrities wowed all with their humble, down-to-earth attitude and their readiness to spontaneously join with the crowds. They kept the crowd on their feet, by effortlessly singing the latest chartbusters with gusto.

Atlanta’s talented local singers, including Venkat Chennubhotla, Phani Dokka, Ram Durvasula, Gopal Turaga, Srinivas Durgam, Bhanu Sri, Usha Mocherla, and Padma Pucha, added to the festive night with their melodies. The crowd exhibited not only enthusiasm but a sportive attitude and goodwill, and the night came alive with the melodious songs, pulsating rhythms, and enthralling entertainment.