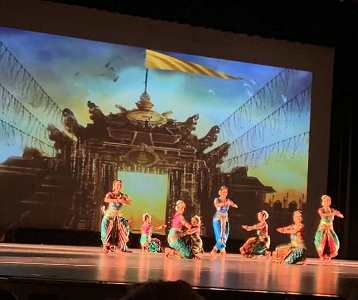 (Left) A dance program, one of many presented at the Tamil Nadu Foundation's 45th National Convention.

About 800 delegates from different parts of the USA gathered in Atlanta for Tamil Nadu Foundation’s 45th National Convention during the Memorial Day Weekend. The objective of the two-day Convention was to enrich and empower the underserved in Tamil Nadu through TNF’s “Mann Vaasanai​” (Smell of Native Soil) initiative which includes establishment of a corpus fund to initiate and sustain humanitarian projects in each of the 33 districts in Tamil Nadu and the Union Territory of Pondicherry.

People representing 33 districts of India where TNF does charity work.

The Convention, hosted by the Georgia Chapter of TNF in partnership with Greater Atlanta Tamil Sangam, raised about $100,000 for the “Mann Vaasanai” initiative. Well-known Tamil scholar and humanitarian Kundrakudi Ponnambala Adigalar was honored with TNF Excellence Award for his educational and humanitarian services in rural Tamil Nadu, and Mr. Rajarethinam, IAS (Retired), was honored with TNF Service Excellence Award for his visionary leadership to TNF Tamil Nadu Chapter.

Mr. Asim Kumar, Consul, Consulate General of India in Atlanta inaugurated the Convention and lauded TNF’s focus on government affiliated schools, hospitals, and organizations, as they are the ones that cater to the needs of the underprivileged. He requested to focus on promoting entrepreneurship-based partnership between Tamil Nadu and India as that will generate more jobs for the underserved in India and in enriching the status of the Indian community in USA.

A significant aspect of the Convention was the Youth Convention attended by about 50 second-generation American Tamils,which that focused on volunteering in India and connecting with their ancestral heritage through service, said Kannappan Sekkappan, TNF Convention Coordinator. The inaugural Tamil American Youth Making An an Impact (TAYMAI) Awards were presented to Shreya Ramesh of Atlanta, Meghna Chandrasekaran of Maryland, and Ananya Ramanathan of Pennsylvania for their grant proposals to continue their TNF summer internship related service projects in Tamil Nadu.

Program Committee Chairman Sudhaher mentioned that the light music by popular folk artists Rajalakshmi and Senthil Ganesh brought the audience dancing to their feet. A colorful parade with groups representing their native districts was conducted for the first time in the TNF Convention. The majestic dance drama “Kadai Ezhu Vallagal” directed by Madurai Muralidharan with participation by 120 local artists portrayed the philanthropy of seven legendary Tamil kings. 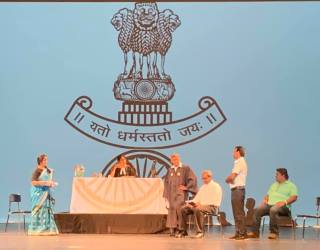 (Left) Programs were presented by members from all over the country.

Atlanta volunteers who made it happen.