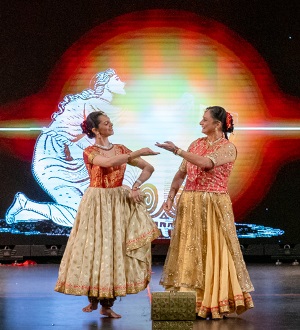 Have you ever wondered about myths and legends from around the world, what they symbolize, how cultures formed around them? Nritya Natya Kala Bharti’s 2019 annual concert was ground zero for this discovery. The show on May 4, 2019 at the Georgia World Congress Center’s Sidney Marcus Auditorium displayed to an audience of 1,200 guests a brilliant collection of myths from the world, intricately woven into one another by guru of Kathak dance, Kumud Savla. Set to the heart-pounding beat and melting melodies of Sandeep Savla, the choreography of the evening’s performances kept equal pace with much variety and grace.

The evening’s collection included myths from India, with the rendition of Goddess Durga and Mother Ganga. The vibrant dress of the nine forms of Durga along with the backdrop brought the audience alive as Durga slew Mahishasura. Mother Ganga flowed beautifully through the moves of Kathak and the enthusiasm of the dancers. 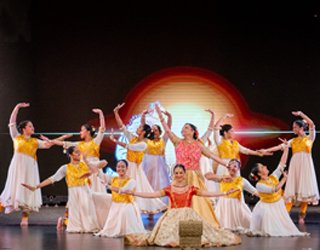 Among other myths, the evening also showcased Chinese yin and yang, Native American legends of the origins of music and language, and famous Greek myths of four seasons, fire, and Pandora’s box. The item depicting the story of Pandora’s box was the icing on the cake. Kumud Savla’s command on footwork and grace reminded us that humanity’s progress is dependent on the effervescent dance of Hope around us. 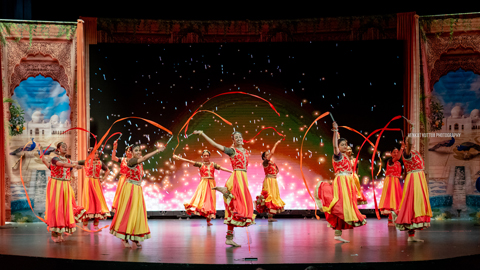 The Kathak segment was followed by the Bollywood segment, “Genres of Bollywood,” depicting the diversity of Bollywood music. From the evergreen classics and the latest pop songs to world music, jazz, and rock and roll, NNKB performers beautifully showcased how Bollywood music has evolved over time.

NNKB raised the bar by bringing together jaw-dropping perfection of costumes, sets, and backdrops. Lighting and production elements managed by Sil Savla illuminated the stage beautifully. It was a clue to the confidence of the performers.

Kumud and Sandeep Savla, along with entire NNKB team—Samta Savla, Manjula Devi, Anjali Tanna, Samaica Deshetty, and Vasanta Chivukula—gave yet another flawless performance by their 250 artists to the citizens of Atlanta.

In addition to a fabulous show, NNKB partnered with Narayan Seva Sansthan (NSS) to support the noble cause of sponsoring no-cost surgeries for the differently abled in India and throughout the world. NNKB sponsored 236 life-transforming corrective orthopedic surgeries for very poor young girls ages 1-13, thus helping to provide them inclusiveness and equality. These young girls can then celebrate their feminine energy (shakti) and be hopeful for a better future because they now have higher self-esteem and dreams to go further in life.

Manoj Barot, Executive Director of NSS USA, presented a documentary of Narayan Seva Sansthan’s extensive work in the field of rehabilitation for the differently abled. He also showed a video of special thanks from NSS Global President Prashant Agarwal, along with before and after pictures of 301 young girls who were provided corrective surgeries. This collaborative effort was supported by donors such as Jagdish and Madhu Sheth, Dr. Paddy Sharma, Dr. K. Sujatha Reddy, Kalpesh and Seema Patel, Pravin Patel, Raj Patel, Ahmad Rasheed, Pravina Patel, Jigar Patel, and Emory Druid Hills Rotary Club.

Chief guest Robert Prater, ex-Mayor of Warm Springs, GA and polio survivor, was thrilled to let the audience know about his recent visit to NSS headquarters in Udaipur, India. He spoke about the level of great services provided for physical, social, and economic rehabilitation. Mr. Prater also announced a new project at NSS with fabrication of hundreds of orthopedic artificial limbs on a daily basis.

Chief guest Consul Shailesh Lakhtakia commended the joint venture between NNKB and NSS. He was especially happy to see children who were born here learning Indian classical dance (Kathak), and he congratulated NNKB director Kumud Savla and family. For both the audience and performers it truly was an evening of bringing hope through dance!