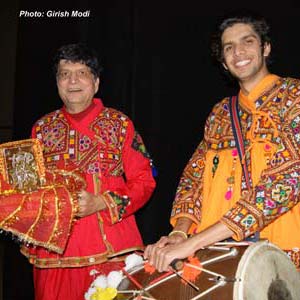 Kumud and Sandeep Savla, accompanied by the NNKB teachers Priya, Samta, Yashwant, Atrayee and Athi, first lit the traditional diya. Then Kumud and the advanced students performed a Kathak dance describing the Hanuman Chalisa, asking Hanumanji for blessings of strength and purity.

The first half of the recital began with classical dance, with live musicians in the background—the Savlas never use CD tracks for this—for the Sanskrit lyric poem “ Meghaduta ” (Cloud Messenger) by poet-playwright Kalidasa, who lived perhaps between 380-415 AD. This hour and a half long performance spanned 16 episodes, and over 100 students participated. Yaksha was played by Aditya Prem, Yakshini by Samta Savla, Megh by Priya Choksi, Kuber by Raheem Budhan and Sutradhar by Vasanta Chivukula.

The story: Yaksha, a subject of King Kuber, neglects his duties and is sentenced to a year-long exile, separated from his wife Yakshini. Yaksha asks a passing cloud to take a message to his wife, convincing the cloud by describing the many beautiful sights the cloud will see on its northward course from Ramgiri Mountain to Alakapuri. Meghaduta’s travel includes crossing of mountains, forests, rivers, the cities of Ujjain and Kurukshetra, the Himalayas and Mount Kailas.

More then three months of practice went into the show so that the audience could enjoy all from the basic steps of the enchanting four-year-olds to the more complex and breath taking rhythmic circles, hand movements and vigor of the older teenagers.

“Elements” was the theme for the second half: a variety of colorful folk dances and engaging and amusing Bollywood dances depicted Earth, Sky, Water, Fire, and Air. “ Radha Kaise Na Jale”was much appreciated, with witty constumes depicting Radha on the front and Krishna on the back (similar to a dance number in the film Navrang).

“Udi” from Gujharish was performed by the NNKB teachers; “Behene De” from Ravan had modern choreography; and a bhangra went with an energetic Rang De Basanti hit tune. The grand finale was the patriotic song “ Mere Desh ki Dahrti” from Upkar, when all the participantsentered the stage in groups and danced in a colorful number. Even the bullock cart made a return appearance!

The students demonstrated grace and poise. The cutest are always the little ones, dressed in beautiful Indian outfits, with eyes wide, missing teeth or wearing braces, smiling and reciting the Kathak bols under the guidance of Kumud—they are so cute. Emcee for the evening was the charming Viren Mayani whose natural warmth, knowledge of music and comfort on stage kept the evening rolling.

NNKB has instituted a dance and music certification program affiliated with Gandharva Mahavidyalaya of Pune, and its layered approach is in keeping with its dedication to produce world-class artists.