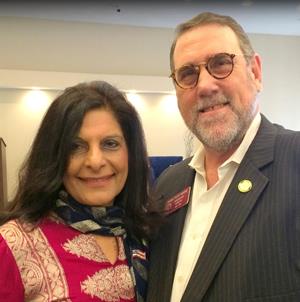 Hundreds of American Muslim citizens, most of them professionals and business owners in the metro region, gathered in a celebratory launch of Independent Political Action Committee (I-PAC) Georgia in Lawrenceville on Sunday, August 21, 2016.

I-PAC is an organization that was formed in 2013 to address the issues the Muslim community faces in the state of Georgia. It comprises of six board members: Anis Sherali, Yosuf Burke, Rizwan Hasan, Tajammul Halim, Amjad Taufique, and Nasir Mujawar. IPAC’s website is www.ipacgeorgia.com.

Lawmakers expressed resolve to unite the American Muslim constituency in the face of political questioning of their commitment and dedication to the United States.

In the midst of a divergent and heated election season in 2016 in which American Muslims are frequent subjects of national debate and are demonized because of their faith, “Getting out the American Muslim and Pan-Asian vote is critical to I-PAC,” said Mr. Rizwan Hasan, one of the board members of I-PAC. “A key goal is gaining political representation for many underrepresented communities in Georgia, and to educate and empower these citizens, and lawmakers, in the process. That’s what I-PAC is about.”

The I-PAC would like American Muslims to work together to serve the needs of the community, and join together to demonstrate to the politicians in the state that a large number of American Muslims live in Georgia and are part of the political landscape. Meeting with government representatives and having a dialog with them is an important goal of the I-PAC.

A highlight of the evening was a moving keynote address by Dr. Gulshan Harjee. She related the multiple hardships she faced prior to coming to the U.S., including being forced to flee civil war in Africa in the mid-1970s. As a Morehouse medical student, Dr. Harjee transferred to Emory and today is a primary care physician , CEO/President of First Medical Care and CMO/Co Founder of the Clarkston Community Health Center, focusing her philanthropy on helping refugees and underinsured patients.

I-PAC’s long term plans are to establish stronger relationships with elected officials and build coalitions with other political action committees with similar interests. Beginning in 2013, I-PAC began in its plan of reaching out to and representing the Muslim Community in Georgia, which is primarily composed of Southeast Asian, African American, Arab, and Turkish ethnicities, among others. One of I-PAC’s goals is to reach out and collaborate with other minority groups, such as the Latino / Latina and Asian American communities.

Video:
“Dr. Gulshan Harjee shares her personal story, and the great contributions of Muslim Americans”
Bonnie Youn Published on Aug 22, 2016
Dr. Gulshan Harjee, internist and cancer survivor, is a Tanzanian born physician, who fled her war-torn country when she was a teen.
She delivered a moving speech at the 2016 Election Rally: Muslims for a Stronger America inaugural event, hosted by I-PAC in Lawrenceville, Georgia. She shared her own personal story, and spoke eloquently of the tremendous contributions of Muslim Americans to our country. She also encouraged communities to raise their political voices, and to vote in the 2016 Presidential Elections.
Dr. Harjee is a DeKalb Medical Founders’ Circle member, creator of a healthcare scholarship, and Clarkston Community Health Center co-founder. She focuses her philanthropy on helping refugees and underinsured patients be and stay well.
https://youtu.be/0xWOQ51TRyU

Bonnie Youn says, “We have permission from Dr. Gulshan Harjee to publish her amazing, moving speech. Please register to vote, and then march to the polls this November. Raise your political voices, because we must beat back the darkness.”