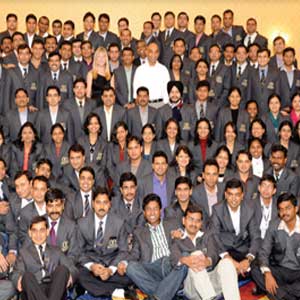 As India emerges as a global economic superpower, the country’s revenue service officials need to be versed in international taxation and other transnational financial issues. So for five days in November, an elite group of 134 newly hired tax officials from the Indian Revenue Service came to Atlanta to learn more about the U.S. tax system, international tax treaties and corporate America.

“Cross-border transactions are increasing in India and a lot of multinational companies from the U.S. and Europe are doing business with India,” said Ravichandran Ramasamy, a high-level Indian Revenue Service official who led the group. “They need to understand international taxation issues. The G-20 countries do business with India, and India is growing at 9 percent a year.”

At a training hosted by the India China America (ICA) Institute at Kennesaw State University (KSU) Coles College of Business, the officials spent hours in sessions, then visited the Federal Reserve Bank of Atlanta and UPS headquarters, and toured the Kennesaw State campus.

At a banquet in their honor, dignitaries included Georgia Attorney General Sam Olens, British Consul General Annabelle Malins, India's new Consul General for Georgia Ajit Kumar, Emory's and ICA's Dr. Jagdish Sheth, and KSU's Dean of the business school Dr. Kathy Schwaig. Viren Mayani was honored and presented with a guerdon by Mr. K.M. Mahesh, Deputy Dir. (Faculty) & Assoc. Course Dir. of the 64th batch of the IRS, for exceptional logistical support and management of their visit. A small group of the tax officials shared their culture and talent by presenting a solo Bharatanatyam piece, some Bollywood songs, a traditional boat song and dance from Kerala, and a high energy Bhangra dance.

Program participants included engineers, doctors and social scientists from 23 states in India who are being trained as entry-level tax officials. In 20 or 30 years they will be leading the Indian Revenue Service. From 500,000 applicants for civil service positions last year, about 500 passed the rigorous exams, and went on to a 16-month training. From them, these 134 were selected for the 1-week U.S. trip, later to be split in splinter groups of 4 to continue their visit to South Africa, Malaysia, Netherlands and Australia, in the first program of this kind.

The Indian Revenue Service, the Ministry of Finance’s entity in charge of collecting taxes, collects $100 billion in income taxes a year. “India is growing fast,” said Jayasankar Neelakantan, a faculty member at the National Academy of Direct Taxes who traveled to Atlanta with the group. “Most Indian companies are exporters or are buying foreign companies.”

For his part, Narsingh Kumar Khalkho enjoyed immersing himself in game theory and learning how other countries collect taxes. “Game theory is the new theme I learned about,” he said. “Game theory taught us the strategy for expanding the tax base.”

“This was the first time any Indian administrative officer trainees have been sent to the U.S. for a training stint,” said Govind Hariharan, executive director of the ICA Institute. “It is an honor to be chosen to train these officers, who are part of the select cadre that will lead implementation of tax policies in India. As we grow the institute, we expect to offer a variety of programs for corporate executives and civil servants from India, China and the U.S.”