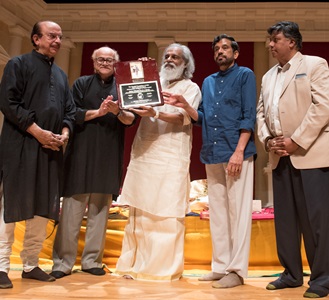 Who would have known that the main architect behind the effort for this sold out concert, Dr. Seshu Sarma, would be leaving for a flight to India to tender care and affection to her ill parent, and despite her sudden departure the entire event would be delivered without a flaw? One also applauds the discipline of the South Indian community for showing up well on time to be in their seats ready for the maestro to begin.

Initial presentations included an introduction to the team and the cause by the President of Sankara Nethralaya, followed by a very touching and uplifting introduction of Yesudas by Dr. Ravi Sarma.

On the dot, Yesudas, the veteran singer and award recipient of the three highest civilian awards issued by the Government of India, stepped on stage with his accompanists. Dressed in the traditional beige with gold edging lungi and kurta with rolled up sleeves, he sat with his iMac and a swara (scale/tune) box to his left. He was accompanied by one of the Atlanta “Carnatic Sisters,” Shree Varshenee on the tanpura, and to her left was Srikanth on violin, while on Yesudas’ right side sat the percussion team: Guru T. S. Nandakumar on mridangam and dholak, and to his left his student, but an accomplished artist in his own right, Santosh Chandru on ghatam.

The program began with an invocation rendered by the Atlanta Sisters and once all of the performers were seated, Yesudas showed the depth and the width of his music education and mastery of having recorded over 100,000 songs in multitudes of languages. He scrolled through his iMac, singing one verse of each song and checking that off as he went down the list. He sang many kirtanas (devotional songs) and film songs in Hindi, Malayalam, Kannada, Tamil, Telugu, and more.

Yesudas shared a brief true story that during one of his train travels, he met a group of young people who inquired whether he was Yesudas and once affirmed they insisted he sing. Yesudas pleaded politely that he is not used to singing in trains and that maybe next time, but the young remained relentless. On their insistence of singing a Hindi song, Yesudas sang ​a bhajan but at the end there was no applause? Intrigued, he asked whether they enjoyed, and they said they would prefer he sang in Hindi. Shocked, he asked the audience whether this Ravindra Jain-composed bhajan in fact was in Hindi or not? It turns out that all they wanted to hear was his famous Hindi film number “Gori tera gaon bada pyaara.” The audience chuckled at the fallacy within the story—how our young can’t differentiate between a Hindi bhajan and a Hindi film song!

Yesudas went on to explain how raga Hindol in Carnatic and Malkauns in Hindustani were very similar and yet named differently. He sang a Hindi bhajan dedicated to Maa Durga, “Maa Bhavani Durga Jagadambe” followed by “Nagmo bhule nazari,” “Annapurna vishalakshi raksha,” and “Shiv sagar.”

He began the next set of songs by explaining the eight pillars of Carnatic music. Initiating it with raga Todi as the main base with eight pillars, he followed through with “Yeda punara” in raga Kalyani and soon thereafter there was a strong mridangam and ghatam jugalbandi.

From then on he performed very short versions of the following kirtanas covering Lord Krishna, Lord Sai Baba, Lord Narayan, and more: “Swami Geeta / Alipayude / Kundalam / Karuna chaiva Krishna / Jab deep jale aana / Srimad Narayan Rajiv netraya janki/ Allah Malik Kaun pukare bhai...dwar pe aaya he achanak sabka Malik Sai/ Harivarasaram.” (About "Harivarasanam": baby boomer South Indians have grown up listening to this song devoted to Lord Ayyappa, who resides in the mountains of Kerala. The song is played after all singing and pujas are complete and it is time for the Lord to rest. This aspect of the devotion has become so synonymous with Yesudas’s singing, that almost everywhere in the world, worshippers prefer his version of this kirtana, even though dozens of famous singers have performed it!)

In spite of singing this huge array of songs there was a request from the audience for a Kannada song and he joyfully obliged with “Krishna Nee Begane Baro” and culminated the recital with a stotra for the health of Dr. Seshu Sarma’s mother.

During the tight 15 minute interval, the officers of the Gandhi Foundation USA, which was also a collaborator of the program and fund raiser, presented Dr. K. J. Yesudas with the “GFUSA Ambassador of Peace” plaque. Chairman Subash Razdan, Executive Director Antony Thaliath, and Board Members Viren Mayani and Ravi Ponangi presented the plaque. GFUSA has been extremely selective of any honor presentations made by the organization, and in the past it has awarded its highest “GFUSA Peace Pilgrim” honor to recognize distinct global personalities such as Mrs. Coretta Scott King, President Jimmy Carter, and His Holiness the Dalai Lama. In keeping with the GFUSA’s selective honor tradition, the organization felt motivated to recognize Dr. K. J. Yesudas, for not only recording over a 100,000 songs in a slew of languages, but having sung a significant number of kirtanas (devotional songs) among them, besides being a recipient of the three highest civilian honors bestowed by the Government of India in addition to the numerous professional awards he has received for his music excellence.

Ticket sales and sponsorships raised $140,000. One family anonymously donated $10,000 in addition to the Pudipeddi Ramalakshmi Grant of $160,000 (INR 1 crore) to Sankara Nethralaya that was given on the day of the concert. Total contributions raised for the charitable organization was $310,000. 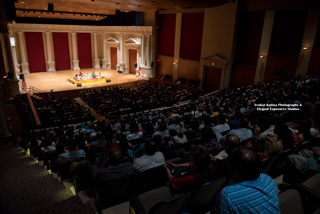 [We are pleased to be able to publish here the longer version of the article above, which contains additional material that could not be included in the November 2017 print and digital issues.

To read Viren Mayani's interview of Yesudas, see the cover story at http://www.khabar.com/magazine/cover-story/music-maestros ]