COVID-19  In-depth info for Indians in Atlanta/Georgia. Click here
Home > Magazine > Around Town > “Paying It Forward” is a win-win for TiE’s Social Entrepreneurs 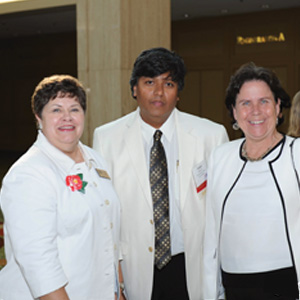 With quite a few unique initiatives under its belt, TiE Atlanta competes to stay as one of the top 10 chapters in the TiE ecosystem. One contributing reason is that it continues to harness development of ROI models for serving the underserved while providing for entrepreneurship to thrive. In this vein TiE gathered a panel sponsored by nonprofits Raksha and Vibha on June 8, 2011 at the Renaissance Waverly. Social Entrepreneurship is a thriving business even in economic downturns, benefiting both giver and receiver.

Speaker Alicia Philipp, named as one of the “100 Most Influential Atlantans” by the Atlanta Business Chronicle, leads one of the largest and fastest growing philanthropic service organizations in the country, the Community Foundation of Greater Atlanta, which grew from $7 million in assets in 1977 to more than $750 million today. Philipp has focused on donor engagement as well as strengthening nonprofits. She spoke about impact investments, “investments intended to create positive impact beyond financial return. As such, they require the management of social and environmental performance in addition to financial risk and return.” The two ways that nonprofits can be impacted are grant making (giving away funds for a measureable outcome) and the bridge loan (that enables borrowing at highly subsidized rates to cover small and unlinked portions of operations not covered by other funding mechanisms). For-profit organizations are also involved, which allows for the Community Foundation’s mission, helping create small business in communities.

Bill Bolling, named as one of the "100 Most Influential Georgians” by Georgia Trend Magazine, is founder and Executive Director of the Atlanta Community Food Bank since 1979. He oversees the distribution of good but unmarketable food and grocery products each year through a network of more than 700 nonprofit partner organizations that feed the hungry. Last fiscal year alone, ACFB distributed more than 25 million pounds of food and groceries. Although soup kitchens have limitations for scalability, canned food can overcome that hurdle. When he approached UPS for logistical help, he was told, “UPS does not make left turns!” His humor and simplicity despite the magnitude of his doings made him instantly likeable.

Ross Baird, investment analyst at Gray Ghost Ventures, started two civic participation initiatives: Vote From Home, which uses technology to motivate political participation, and Georgia PACE, a civic education program. He helps entrepreneurs prepare for long-term financing, connecting them with resources and knowledge. Speaking about his company’s project called SABRAS in Gujarat, India, improving the lives of salt farmers, he described being chillingly moved on learning that the famers wrote in their wills to have their legs cut-off after death—the salt saturated legs do not decompose as quickly in the furnace, and thus the last rites are affected. To help farmers have a better quality of life, minimizing exposure to salt waters, the company introduced solar powered tools, which also avoided spending on gas and which farmers could pay for in 5 years or less with marginal interest. Another example of social entrepreneurial investment in India includes creating and selling solar lamps to replace kerosene lamps. Sold for less than $10, the lamps are user friendly, green, inexpensive, long lasting and healthier.

Cindy Cheatham, a TiE Charter Member as well as VP of Consulting Services with the Georgia Center for Nonprofits, moderated. The audience asked many questions, ranging from nonprofit networking to funding for culture and arts.