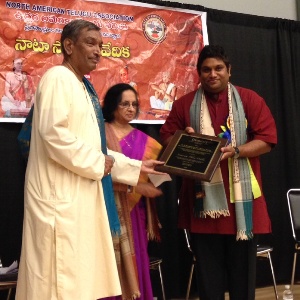 Maitri announced its annual “Dr. P. V. Rao Award for Art and Literature” a few weeks before the North American Telugu Association (NATA) Convention 2014 was held. This year's award went to Sreenivasa Phani Dokka, a well-known young writer and singer from Atlanta. The award was presented on Sunday, July 6, 2014 at the Georgia World Congress Center during the convention.

Maitri, along with the family of Dr. Venugopala Rao Pemmaraju (Dr. P.V. Rao), established this award in 2013. The first award went to Dr. Nyayapathi Shivananda, a renowned portrait artist living in Atlanta.

The 2014 award was presented at NATA’s ashtavadhanam. Viju Chiluveru, Maitri’s coordinator, introduced Maitri and the award to an audience of literature lovers and requested a moment of silence to pay tribute to Dr. Rao. Dr. Managaraju Vanapalli spoke about Dr. Rao, saying that Dr. Rao played a key role in establishing the India American Cultural Association (IACA) and helped several Telugu organizations in the country.

Dr. Rao was the first Telugu person to come to Atlanta in 1966 along with his family and was a father-figure for the entire Indian-American community. A physics professor at Emory University, he was also passionate about Telugu literature and introduced Telugu to North America through a magazine, his several books, and articles that he contributed to many magazines. He was a regular attendee of literary meetings (Sahitya Sadassu). Dr. Rao was close to the Dalai Lama; through Dr. Rao’s efforts, His Holiness the XIV Dalai Lama was named Presidential Distinguished Professor at Emory University, the first university appointment accepted by the 1989 Nobel Peace Laureate and leader of the Tibetan exile community. A lover of nature and art, Dr. Rao’s hobbies included gardening, painting, sculpture, and collecting rare books. He attended Maitri meetings and facilitated several talks by renowned personalities. His daughters are Dr. Saleena Dakin and Nalini Koch.

Mrs. Lakshmi Rao Pemmaraju presented the award, a gold medal, to Phani Dokka, and Dr. B. Krishna Mohan gave the plaque. Phani declared that he was blessed to be the recipient of an award named after a legend he adored. He considered Dr. Rao as his mentor, guide, and philosopher. Phani read a poem he recently wrote about Dr. Rao and his association with him—a very touching moment of the presentation ceremony.