Photo-exhibition: “The Sikhs–A Heritage of Valor and Devotion” at Gurdwara Sahib, Atlanta 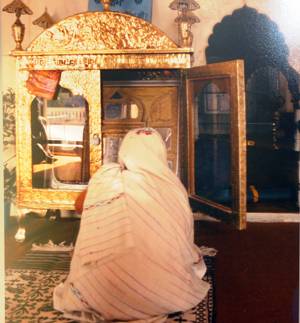 A photo in the exhibit. (Photo of the photo: Bytegraph.com)

The Consulate General of India in Atlanta and the Guru Nanak Mission Society of Atlanta organized a historic photo exhibition of Sikh heritage sponsored by Indian Council for Cultural Relations (ICCR), New Delhi, at the Gurdwara Sahib of Atlanta in Norcross, GA. This was its first showing in the U.S., and Atlanta was the first city to host it.

The exhibition was inaugurated around the Vaisakhi festival, on April 6, 2013 by Honorable Ajit Kumar, Consul General of India in Atlanta. Present were Deputy Consul Hon. Rajinder Singh, presidents/chairman of various Indian-American organizations, and others. 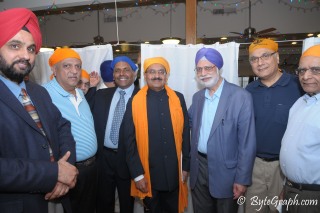 Guru Nanak Mission Society of Atlanta’s Surinder Singh Lalli gave a brief background of the Sikh religion: Sikhism preaches a message of devotion and remembrance of God at all times, truthful living, and equality of mankind, and denounces superstitions and blind rituals. Sikhism is an all-inclusive religion affirmed through the teachings of its 10 Gurus enshrined in the Sikh Holy Book which is revered as Living Guru, the Sri Guru Granth Sahib ji. Guru Nanak Dev, the first of the ten Gurus of Sikhs, and a spiritual philosopher, founded the Sikh faith about 500 years ago. Sikh means a disciple. Guru Nanak Sahib Ji summarized the basis of Sikh lifestyle as Wand kay Chako (work diligently and honestly), meditate on the holy name (Waheguru), and share the fruits of labors with others.

The Fifth Guru, Guru Arjan Dev ji, completed the man-made lake of Amritsar (Lake of Nectar) and, on its island, the Golden Temple, the holiest shrine for the Sikhs—like Mecca for Muslims and Haridwar for Hindus. He also compiled the Guru Granth Sahib (the scriptures for the Sikhs or holy book). The writings and hymns represent all prevailing religions in India at that time, when some of them were not allowed inside the temples. This is to emphasize the equality among humans even if they were from different walks of life.

The 10th Guru, Guru Gobind Singh was a scholar and a great soldier. He set the Sikh community apart from other groups once for all.

Surinder Singh commended Hon. Ajit Kumar for being instrumental in bringing the priceless exhibition of Sikh heritage to Atlanta. Ajit Kumar noted that “ICCR promotes India’s cultural diplomacy and cultural exchanges between nations for mutual understanding…. Sondeep Sarkar … has been involved with this project for the past two decades. This painstaking work and commendable photography by Sondeep will be a fine contribution and presentation by ICCR of the valuable Sikh Heritage to devotees and admirers alike. ...The Sikh material heritage includes a range of objects, from simple artifacts produced in homage to the gurus to fine pieces created at the royal courts of Punjab … gilded arms and armor, paintings and fine jewelry.”

Here is a golden opportunity for young and old to be enlightened about the Sikh religion, its exemplary and iconic Gurus, and Sikhs in general. The exhibition was open in Atlanta from 7th April to 20th April 2013 (10:00 A.M. to 7:00 PM), and then traveled elsewhere.