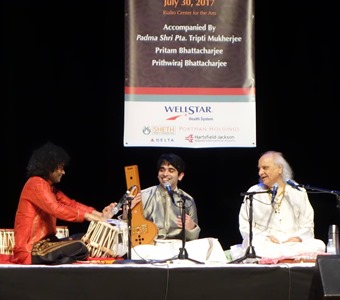 The legendary Pandit Jasraj was “Live in Atlanta” on July 30, 2017 at the Rialto Center for the Arts in Atlanta. The much-anticipated show was presented by his Pt. Jasraj School of Music – Atlanta and by the nonprofit Sangeetayan as Sangeetayan’s premier event. Padma Vibhushan-honored Sangeet Martand Pandit Jasraj was accompanied by his Atlanta school of music faculty, Pritam Bhattacharjee, a disciple of Pandit Jasraj, on vocals and Prithwiraj Bhattacharjee, a disciple of legendary Ustad Allah Rakha and Ustad Zakir Hussain, on tabla, and on harmonium and vocals by Padma Shri-honored Pandita Tripti Mukherjee, also a disciple of Pt. Jasraj, a torch bearer of the Mewati Gharana, and founding director of the Pandit Jasraj Institute for Music Research, Artistry, and Appreciation, USA. 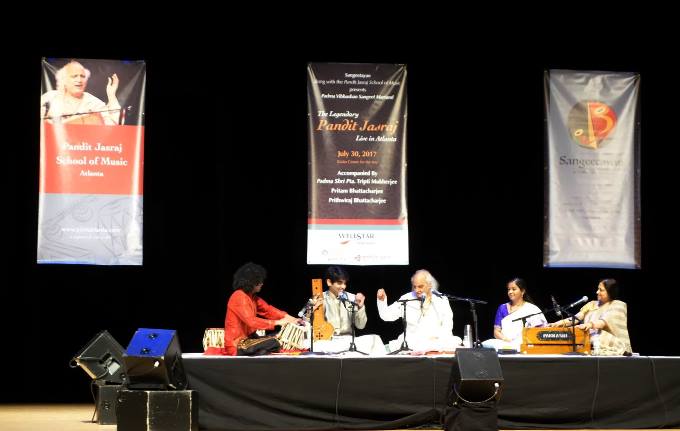 The very engaged and packed audience at the Rialto had taken their seats in time, eagerly awaiting the maestro to commence his art. Madhu Deshmukh emceed the program, and Consul R. Srinivasan welcomed the artists.

And the promise was delivered: Pandit ji slowly walked out from the stage wings, supported on each arm by his disciples Pritam and Prithwi. A strong believer in invoking the Divine’s presence to all his recitals, he began by walking over to the corner where the idol of Lord Ganesha sat beside the traditional brass lamp which he lit, and prayed with a humbled bowed head. Then raising both his hands in the air and chanting “Jai Ho” to the audience; a signature Pt. Jasraj ascend, he went to sit center-stage with swarmandal (a stringed instrument) on his lap. Stirring the strings with a tranquil effect, he took his first pitch and the audience broke out in a thunderous applause. With a digital tanpura in the hands of Pritam ji sounding the notes supported by the music of Pandita Mukherjee’s harmonium, the orchestral backing came full circle with Prithwi ji drumming on the perfectly tuned tabla.

The recital began with a raag rarely presented at concerts: Din Ki Puriya with two compositions based on it, “Raat Basa Aaye” in Vilambit Ektaal (12 Beats rhythm cycle in slow tempo) and “Chalo Ri Aali Mandirava” in Drut - Teentaal (16 Beats in fast tempo).

The ending recitation was his very famous Bhajan “Govindam Gokulanandam” or “Om Namo Bhagavate Vaasu Devaya” based on raag Bhimpalasi, and the final and short closing piece was his famous rendition of bhajan “Mata Kalika” based on raag Adana.

Despite the audience wanting more as expected, with the strict time enforcement by Rialto as well as the fatigue from performing nonstop, Sangeet Martand Jasraj ji closed the performance with his finale and, folding hands with appreciation, he charmed “still going strong at 87 with all of your blessings.” The audience bid him good bye for now with a standing ovation. 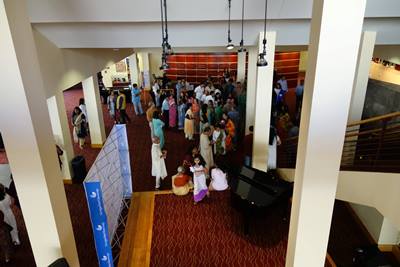 Some of the large crowd who stayed to meet Pandit ji in the green room after the concert. (Photo: Suzanne Sen)

In the green room backstage, it was endearing to see Pandit ji, despite tiredness from the performance, take time to allow well-wishers to enter a few at a time to speak to him. A concert beautifully performed and well attended, it was a great evening spent with great music.

Om Namo Bhagwate - Krishna Bhakti (Pandit Jasraj)
Sona Rupa
Published on Jan 23, 2016
Through history, artistes who have left the most indelible imprints on the sands of time have been the innovators, the ones who have dared to strike their own paths, to explore possibilities, stretch the seams of what is believed to be sacrosanct and holy. Pandit Jasraj is an innovator - an artiste who will be remembered and emulated by future generations for his contributions to musical thought.

Pandit Jasraj rose to stardom in the seventies, offering a totally new approach to classicism - arresting, haunting melody, soft, velvety tonality, delicate, filigree like clusters of ornamentations, sensual languor in phrasing and an overall sheen of romanticism. It captured the imagination of a new generation of listeners who were alienated by the robustness of the classical approach.

And now, into the new millennium, Padma Vibhushan Pandit Jasraj has opened up what can be a new dimension to raga music. He has merged classical values and structures with the rich spiritual ethos and literature of India. He is doing what was done for Carnatic music many generations ago. If a future for spiritual art music emerges in India, musicians and listeners will have to remember Pandit Jasraj for being one of the significant pathfinders. He has raised the bhajan and the stotra from the level of an add-on in a classical concert to an independent musical genre, which enhances music itself and infuses life into the mystical lyrics of the past. Millions of Indians today owe their basic exposure to Sanskrit texts to Pandit Jasraj.

Pandit Jasraj's presentation in the morning session of Swarutsav 2003 was an experience in divine fervour. The maestro has a gift for raising the energy of a space gradually, delicately, into a swaying crescendo of devout passion. He dedicated the session to compositions in praise of Krishna.

'Govind Damodar' is one of Pandit Jasraj's most popular devotional creations, in praise of the Sampoorna Avatara of Mahavishnu. Sri Krishna is the energy, which sustains us today. His Being is merged with the Bhagavad Mahapurana and continues to sustain the manifest world. He is Divinity in human form and humanity expressed in the most divine form. All colours of life find expression in him, He is omnipotent, omniscient. He is Vishwarupa.

'Om Namo Bhagwate Vasudevaya' is one of Pandit Jasraj's most celebrated devotional renditions. 'Govindam Gokulanandam' is an excerpt from Harinamamalastotram - literally a garland of names of Hari - Vishnu.

'Rani Tero Chirjeeyo Gopal' is a moving bhajan, which Pandit Jasraj has rendered with serene elegance and beauty. The bhajan by Surdas on Lord Krishna's childhood is one of the most unique compositions of the artiste.

About Pritam and Prithwiraj Bhattacharjee:
https://www.pjsmatlanta.com/faculty

About Sangeetayan:
Sangeetayan is a nonprofit initiative founded by Prithwiraj and Pritam Bhattacharjee to promote Indian classical music and its rich cultural heritage amongst global audiences in order to create a world filled with music, harmony, and happiness.
Sangeetayan’s goal is to organize Indian classical music concerts, workshops, and lectures in the United States and overseas, and to connect people through music.
https://www.sangeetayan.com/

About the Pandit Jasraj School of Music – Atlanta:
The school was established in 2001 for Hindustani/North Indian classical music and offers vocal training by Pritam Bhattacharjee, a disciple of Pandit Jasraj, and tabla with Prithwiraj (Prithwi) Bhattacharjee, a disciple of legendary Ustad Allah Rakha and Ustad Zakir Hussain. The school has over 160 students, 60% of whom have been dedicatedly learning for over 10 years consistently in the “guru-shishya parampara.” Students range in age from 4 to 70 years, and come from many national and cultural backgrounds. https://www.pjsmatlanta.com/

Previous Khabar article on Pt. Jasraj: “Our Music is a Prayer to the Gods”
By Viren Mayani
August 2003
http://www.khabar.com/magazine/entertainment/our_music_is_a_prayer_to_the_gods.aspx