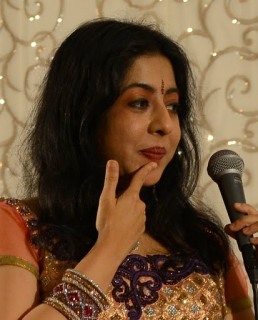 Playback singer Sanjeevani Bhelande, the first ever winner of Zee TV’s Sa Re Ga Ma Pa Challenge in 1995, was back in Atlanta for the annual fundraiser for Ekal Vidyalaya schools. The sold-out concert, "Swar Sanjeevani,"' was at Impact Banquet Hall, Global Mall, Norcross, Georgia on March 16, 2013.

The event, attended by over 400 people, began with a Holi flair as attendees were served a welcome drink, a delectable thandai, by World Hindu Council of America (VHPA) volunteers, followed by dinner from Ashiana Restaurant. Ekal Atlanta President Shiv Aggarwal welcomed all, and invited Hon. Rajinder Singh, Deputy Consul of the consulate of India in Atlanta, to address the gathering; he described Ekal's goal of helping eradicate illiteracy from rural and tribal India by 2015, using one-teacher schools.

GAPI President Dr. Abhishek Gaur said, "I would like to address you in Hindi because children who attend Bal Vihar are present here in the audience. … [E]ach Ekal school runs on one-dollar-a-day basis." He introduced GAPI President-Elect Dr. Piyush Patel and donated $500 on behalf of GAPI.

Mr. Puneet Seth noted that New York Life Insurance Company's slogan is “Keep Good Going,” and that is what Ekal is also doing. “Vidya-daan, the gift of education, is the greatest gift one can give. By committing just $365 a year, you can help with a needy child’s education and eventually his or her quality of life. ”

The concert was emceed by Rachna Gupta. A short video on two large screens showed Ekal's achievements. The dream of Swami Vivekananda, "If the poor child cannot come to education, education must go to him,” is being turned into reality by almost 47,000 Ekal schools.

Sanjeevani is helping to help raise funds during her 2013 U.S. tour from February to July. In one city in Florida, 400 schools were sponsored in one night! From her first playback song in film Kareeb, her gentle voice helped her win best female playback singer award. Her latest endeavor is a book and album Meera and Me where she has ‘songslated’ 32 poems of Meerabai into English and recorded them. Her dream to perform a musical on Meerabai on Broadway got a rousing applause from the audience. 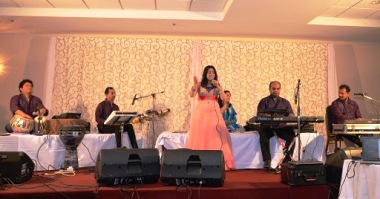 Other members of Sanjeevani’s troupe were singer Chirag Panchal, Zee TV’s seven-time Sa Re Ga Ma Pa Challenge winner, and Mohit Shastry, the most sought-after flautist in Mumbai concerts. Amit Mehta, a rhythm-storm player, played tabla with flamboyance and control. Rupesh Rane on percussions and octopad got the audience tapping their feet to his scintillating ghunghroos, khanjiri, and duff. Sound system was provided by Salim Panjwani of Sur Sangeet.

Soft-spoken Sanjeevani thanked Ekal for giving her another opportunity to spread Gyan Kee Roshni and to remove the darkness of illiteracy from India. She began with an apt song, "Satyam, Shivam, Sundaram." "For good health do exercise, yoga, eat vegan, but do not forget mohabbat (love)," she quipped and sang Noor Jehan’s "Jawan hai mohabbat" from Anmol Ghadi. Chirag sang Rafi's "Tu Ganga kee mauj" (Baiju Bawra). Sanjeevani showcased songs from Barsaat, songs old and new, solos and duets. Some songs with sounds of horse carriage, trains, etc., were rendered even more appealing by the artistic wizardry of the accompanists.

She spoke about her reverence for Meerabai and sang in Hindi and English from her book/album expressing Meerabai’s maganbhav, prembhav, and anandbhav, released by Mahesh Bhatt and Vidhu Vinod Chopra.

"After Meera, Radha can’t be far behind", she quipped, and hot chartbusters followed from films Student of the Year and Dirty Picture. Soon, members of the audience were dancing.

Sanjeevani requested Purnima Mathur of Atlanta's Saragam group to participate in the chorus. To give the troupe a chance to enjoy a hot cup of tea, Purnima, at Shiv Aggarwal's request, sang "Nainon mein badra chhaye," a Bheem Palasi raag-based semiclassical song from the film Mera Saaya. Her a capella rendition needed no music to receive a thunderous applause! 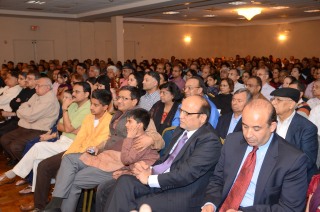 Sanjeevani sang Gujarati hits and a Marathi song at audience request. She accommodated requests during the Juke Box hour where sponsors donated to Ekal schools to hear songs of their choice.

Sponsors were periodically announced. People found unique ways to contribute: Georgie Bhalla, through Mustafa Ajmeri, offered $10 to Ekal for every ticket sold that night for the "Divine Journey" event on March 23.

Ekal felicitated Kusum Khurana, recent recipient of the Hind Rattan Award. She was impressed with Ekal during her visit to two schools and encouraged sponsorship.

Ajay Upadhyay presented a slide show on the curriculum in the schools. In thirteen years, Ekal has grown from 5,000 schools to almost 47,000. With this concert, Atlantans increased that count by about 100. 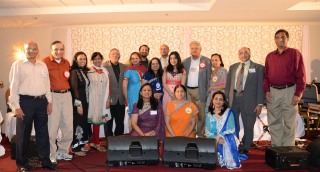 Chander Aggarwal, Southeast Region President of Ekal, presented certificates of appreciation to Geet-Rung School of Dance and Music for their February recital which sponsored 3 schools. The Atlanta Chowki Group, Atlanta Hindu Society, and Swadhyaya family of Atlanta were also thanked.

Shiv Aggarwal thanked all those above and Dr. Piyush Patel, Sushma Patel of Fifth Season (complimentary stage setup and décor), Mani Krupa (statue of Saraswati), Salim Panjwani, Nikita Patel of Plaster Zone for looking after the children at her Arts & Crafts Studio while parents enjoyed the concert, SEWA volunteers, Mustafa Ajmeri, Doc McAlpine, and all, for a successful and enjoyable time.