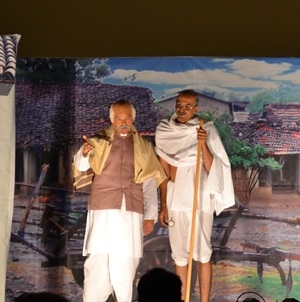 Smita Gandhi, founder of Siddhi Events in New Jersey, and the India American Cultural Association presented the Gujarati drama The Iron Man of India–Sardar Patel (with some dialogues in Hindi and English), performed by Vikram Academy of Performing Arts, Ahmedabad, at IACA on Saturday, May 18, 2019.

The fast-paced, riveting play, written and directed by Dr. Vikram Panchal (Founder/Head of the Vikram Academy) and Shaunak Vyas (TV actor, thespian, and actor playing Sardar Patel in the play) is suffused with a spirit of patriotism. The play deals with the life of India’s fearless barrister, politician, statesman, India’s first Deputy Prime Minister and Home Minister, Sardar Patel, who played a pivotal role in India’s Independence struggle and in integration of 565 princely states (rajwadas) into a unified India. The play has rousing dialogues, biting humor, and quips and touching moments as well.

The play begins with India’s rousing national anthem, “Jana Gana Mana.” Sardar Patel arrives in Bardoli to initiate the famous Bardoli Satyagraha in 1928 by exhorting farmers to stand up against the British rulers and not pay unjust land taxes. The victory with nonviolent civil disobedience earned him the sobriquet ‘Iron Man of India.’ The play then focuses on the tumultuous period from 1946 to 1949. It depicts Sardar’s role, along with Maulana Azad, Mahatma Gandhi, and Pandit Nehru in dealing with wily Jinnah and the British government in preventing the partition of India. But the partition could not be avoided. The play deals with the real reason behind the ‘Divide and Rule’ policy of the British Raj and its support of Jinnah in his demand for Pakistan. Though he was the overwhelmingly popular choice of people as India’s first Prime Minister, he withdrew his name in favor of Nehru, at the behest of Gandhi. 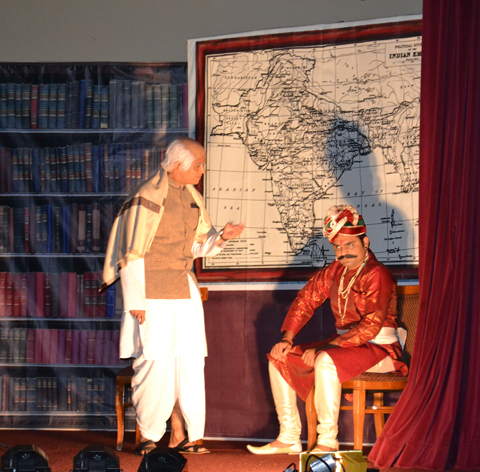 Sardar Patel played a monumental role in gaining India’s independence and in integrating 565 self-governing princely states into a united independent nation. Using diplomacy and even military action, he got both Nizam of Hyderabad and Nawab of Junagadh (states with majority Hindu populations) to accede to India. However, Kashmir still remains a problem, because in 1948 Pandit Nehru, despite Sardar’s disapproval, took the Kashmir issue to the United Nations, advocating a plebiscite, and the matter still remains unresolved. 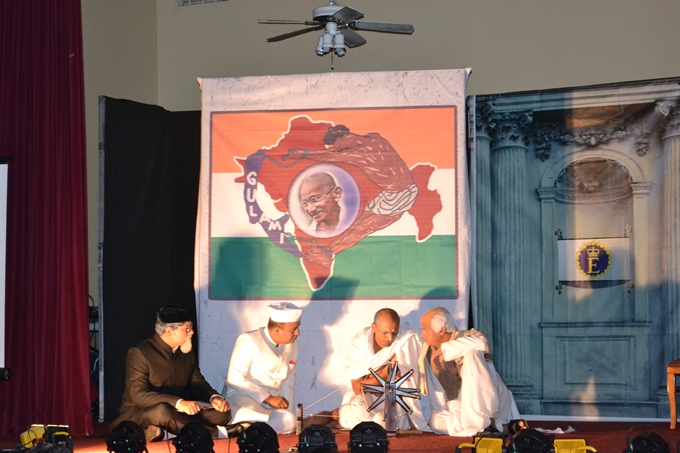 In India, PM Narendra Modi has inaugurated the world’s tallest 182-meter “Statue of Unity” on Rashtriya Ekta Divas for Sardar’s 143rd birth anniversary, as tribute to this leader’s pivotal role in India’s independence and unity.

In an interview with the writer, Dr. Vikram Panchal shared that his Academy is an institution for dance, music, literary activities, and dramatic arts; he is founder/head with Dr. Rekha Mukherjee. On their third tour from April to June 2019, the Academy has brought four plays to the U.S.: The Iron Man of India–Sardar Patel; Swami Vivekanand; Main desh drohi nahi hoon-Godse; and Selfie. The ten actors perform multiple roles and work on sound, lighting, background music, makeup, costumes, props, backdrops, etc. This play has won many accolades; it is about two and half hours long with twenty scenes. The Academy prefers to present plays about patriotism and noted figures rather than comedies. He commended the audience here as warm-hearted and responsive. He and his troupe would be delighted to return here, he said.

Shaunak Vyas thanked the audience, noting that they have performed 70 shows of the play. They have also performed their new play Main desh drohi nahi hoon-Godse at two venues, giving the audience an opportunity to see the other side of the coin—why Godse assassinated Gandhi. Dr. Vikram lauded Shaunak Vyas for his research, writing, directorial, and acting skills. “The Academy has made a film, Teacher of the Year, and Shaunak plays hero’s role in it,” he said.

Smita Gandhi thanked the artists “for entertaining me and also educating me.” IACA’s Ani Agnihotri said, “I do not speak Gujarati, but I was totally enamored with Sardar’s incredible role in India’s freedom struggle and thereafter, combined with top-notch acting. Please bring the movie on your next visit to Atlanta. My thanks to you on behalf of IACA and the sponsors.”

Arts promoter Mustafa Ajmeri was thanked for helping stage the play. Sanatan Mandir provided a delicious dinner. This gem of a play is a MUST SEE, especially by our young generation.

Members of the troupe with Sardar (Shaunak Vyas) flanked by Dr. Panchal on left and Smita Gandhi on right. (Photo: Harshad Shah)

Vallabhbhai Patel (31 October 1875 – 15 December 1950), popularly known as Sardar Patel, was an Indian politician. He served as the first Deputy Prime Minister of India....Patel, however, was no revolutionary. In the crucial debate over the objectives of the Indian National Congress during the years 1928 to 1931, Patel believed (like Gandhi and Motilal Nehru, but unlike Jawaharlal Nehru and Subhas Chandra Bose) that the goal of the Indian National Congress should be dominion status within the British Commonwealth—not independence. In contrast to Jawaharlal Nehru, who condoned violence in the struggle for independence, Patel ruled out armed revolution, not on moral but on practical grounds. Patel held that it would be abortive and would entail severe repression. Patel, like Gandhi, saw advantages in the future participation of a free India in a British Commonwealth, provided that India was admitted as an equal member. He emphasized the need to foster Indian self-reliance and self-confidence, but, unlike Gandhi, he did not regard Hindu-Muslim unity as a prerequisite for independence.
https://www.britannica.com/biography/Vallabhbhai-Patel