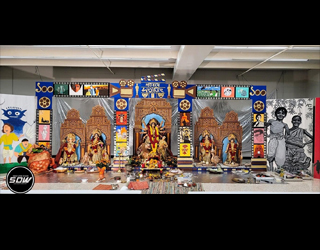 After a Covid-19-induced virtual celebration of Durga Puja in 2020, this year, Pujari Atlanta celebrated Durga Puja in-person with all the elements of a typical Durgotsav—Puja, Aarti, Bhog and Dhunuchi dance along with cultural programs. It was a beautiful two-day event held on October 9 and 10 at Berkmar High school.

[Left] Durga Puja decorations were a tribute to Satyajit Ray on his birth centenary.

In consideration of CDC outlined safety precautions, it was a members-only event put together through meticulous planning and hard work by the Pujari executive committee, participants and organizers.  After attending the event, one could appreciate the efforts that went into organizing this important Bengali religious and cultural event, especially during this time when the uncertainties presented by the pandemic have not quite left us.

From the beat of the dhak and the circle of worshippers offering pushpanjali (flower offering to Goddess Durga) to the rhythmic chant of prayers, “Ya Devi Sarvabhuteshu, Shakti Rupena Samsthita,” it was a wondrous spectacle.

At Pujari’s celebration of Durga Puja, one could just feel the enthusiasm, fervor, energy and sheer joy of the people attending in gorgeous attires as they greeted each other, posed for photographs, and enjoyed the delicious meals distributed in Styrofoam boxes following safety protocols. The Puja decorations, reminiscent of the Kolkata pandals, featured some unique artwork showcasing Satyajit Ray’s famous movies and the timeless characters as a tribute to the Oscar-winning filmmaker and author on his 100th birth anniversary. 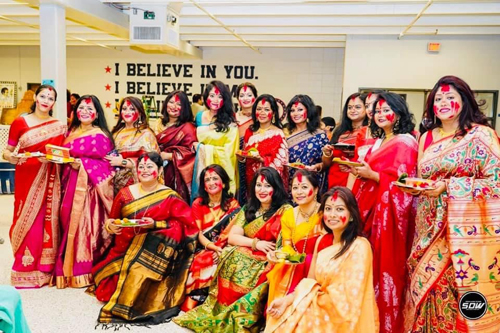 The cultural richness of Bengal came alive through a magical assortment of dance dramas that included Rabindranath Tagore’s Shapmochan and Kalidas’s Shakuntala along with theatrical adaptations from the films, Kabuliwala and Bela Seshe followed by some upbeat fusion music.

The festivities for this year came to a close with Sindur Khela, a ceremony where married women apply vermillion on each other’s foreheads; and Dhunuchi, a dance offering to Goddess Durga performed with an earthen pot containing fire.

Pujari Atlanta very successfully integrated the rituals, fun, food and fashion of what is typically a fiveday festival and packed it all into the convenience of an American two-day weekend. Nothing was amiss. Durga Puja symbolizes the victory of good over evil and in the midst of a pandemic, one can conclude that prayers have come from every heart for a happier and healthier world. A joyous anticipation for next year’s Durga Puja has already begun!