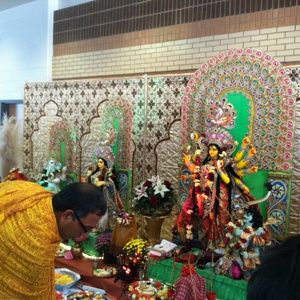 Finally the celebrations for this year’s Durga Puja, the greatest Bengali festival are over. This is the 3rd year that Purbasha (a socio-cultural nonprofit organization for the Bengali community in Atlanta) celebrated Durga Puja at Meadowcreek High School in Norcross. The celebration was open to all. A strong crowd of around 250 people from Georgia and neighboring states gathered to get the blessings of Maa Durga.

The formal festivities at the Purbasha venue started on the evening of Friday, October 11, 2013. As in previous years, lots of people gathered and enjoyed the friendly warmth and spirit. Purbasha's puja magazine Agamani was available.

Sayak Bandopadhyay, a famous Bengali rock band singer and screen playback singer, performed on Saturday night. Earlier there was puja, puspanjali, sandhyaarti, dhunuchi nach, and a kids' competition, and that evening Purbasha's local artists presented a cultural program that was highly appreciated by the audience. Bijoya Dashami and Sindur Khela were held on Sunday, followed by a great lunch of spicy meat curry, rice, and sweets.

Video:
Sayak Bandopadhyay - Coming to North America in 2013
Sayak Bandopadhyay's musical career began at the age of 18 as the lead vocalist of the Bengali band, Lakhhichhara. Sayak was trained under Pt. Ajoy Chakraborty and then Mr. Kumar Mukherjee. In 2004, Sayak joined the famous rock band, "Cactus." As the lead vocalist of Cactus, Sayak has performed in over 800 shows, both in India and abroad. Sayak toured the U.S. with Cactus in 2006 and 2008. Sayak is working as a freelance music composer and vocalist in the Bengali film industry since 2010. He sang for movies like "Kagojer Bou," "Chol Paltai," "Necklace," and "Elar Char Adhya." He is currently composing music for a Bengali feature film, "Kolkata Live." Sayak has also been involved in national projects and has composed music for Anurag Basu's "Love Story." Sayak is returning to the U.S. as a solo artist to present "Jhankar," a musical evening of both Bengali and Hindi songs.