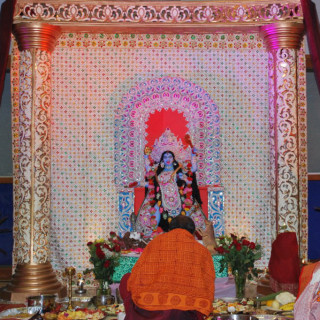 Purbasha's grand Durga Puja celebrations were held on Oct. 20 and 21 at Meadowcreek High School. Members gathered the day before to celebrate Sosthi and set the stage for the next day. People from Georgia and neighboring states gathered around Devi Durga to pay homage and respect on Oct 20. With hands folded and heads bowed, crowds prepared for aarti and pushpanjali. Children participated in an art competition. Puja was followed by prasad distribution and lunch. The evening was topped off by a cultural program, which included entertainment from local artists, adults and children, and featured dance, songs, piano and guitar music, poetry, and drama. 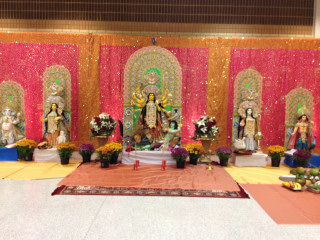 Maa Durga and her children.

On Oct 21, Maha Navami and Dashmi Puja were celebrated with pushpanjali, aarti, and sindoor khela. A splendid lunch was served. Our hearts saddened as we saw the crowds disappear and found "Maa Durga" prepared for transport, as we knew the long-awaited event had come to an end. Members remembered the late night rehearsals and the sleepless nights that went into making the program a success.

Heartiest appreciation was extended to the Indian community for their huge support. Over the two days 500+ people visited the puja and then found themselves waiting until next year, to again gather to celebrate Durga Puja. At the same time, however, they felt excited, looking forward to Kali Puja on Saturday, Nov. 10, and the program of the Nirmitee group of Bollywood X Factor fame. 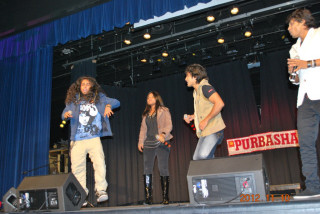 On that day, Berkmar High School was the scene of celebration. Guests came from North Carolina, Tennessee, and Alabama. Jewelry, sari, and snack vendors caught everyone's attention, but guests raved about the puchhka stall. Decorations and the idol were in impeccable style: from Kumortulli, standing five feet tall, goddess Kali was effulgent in scintillating attire. Puja began around 6pm and guests joined for pushpanjali to Maa Kali. The atmosphere was charged with the sound of live dhak and dhol and chanting as devotees offered their unfeigned prayers to the mother goddess. A sumptuous dinner, catered by Raja restaurant in Buckhead, was served after prasad distribution. As part of the cultural program for the evening, Purbasha was delighted to host the famous X-Factor group Nirmitee from Bollywood. Their spectacular performance mesmerized the audience till the early hours of next morning.

And so concluded the only Kali Puja celebration in Georgia by a Bengali association from West Bengal.