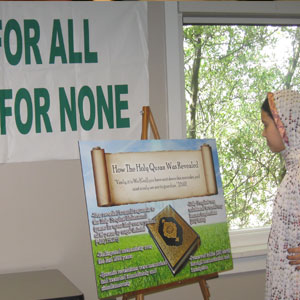 The poster at the Quran Exhibition read "Love for All, Hatred for None."

On March 24, the Ahmadiyya Muslim Community's GA chapter held a Quran Exhibition at the Central library in Marietta to help Americans learn about the Holy Quran and examine the actual teachings of the Muslim scripture firsthand.


“The traffic has been very steady the whole time,” Sama Rehman told us, which is encouraging, because it indicates that Southerners are willing to engage in discussions about religion, free of rancor and negativity. 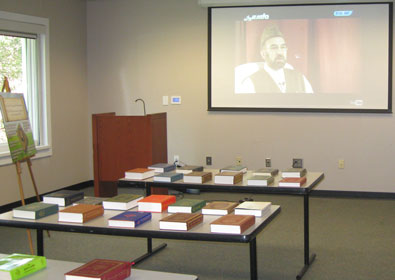 The display of Qurans in many languages. Inside the exhibition, Nafis Rehman spoke to guests while we browsed Qurans in thirty different languages. “We have Holy Qurans in 77 different languages,” he said, “so we hope to expand as time goes on.” While Qurans in 77 languages seems impressive, there are 6800 to 6900 languages in the world, so the list will continue to expand. Some languages looked familiar, such as French, German and Spanish, but the list included more exotic ones, such as Kashmiri, Telugu, Igbo, Sarieki, Jula, Kikamba and Fijian. 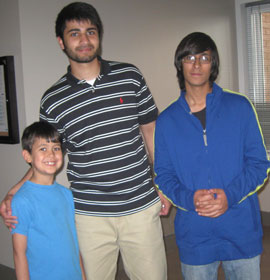 Quran Exhibition welcoming committee. When we arrived, a Social Studies teacher discussed the debates she enjoyed in her classroom on Islam. She sounded very positive and enthusiastic.

Rehman reported that one guest asked him “How can Islam be associated with women’s rights?” He replied that “No other religion prescribed any rights for women before Islam,” an historical gem which has not been highlighted by the press. Billboards presented highlights while a video on the history of Islam played.

Response to the exhibit was overwhelmingly positive, which tells us that not all Southerners agree with Newt Gingrich on the subject of Muslims and Islam.