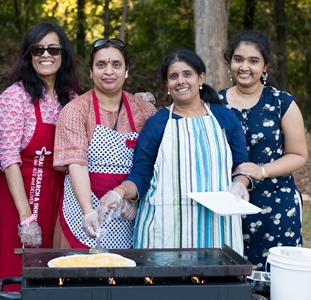 The cool, crisp autumn evening was perfect for Raavan Dahan (burning of an effigy of Raavan) and food mela (food festival) organized by the Chinmaya Mission Atlanta at Chinmaya Niketan, in Norcross, Georgia, to celebrate Dushera. Originally scheduled for October 19, 2019, the celebration was moved to the next day due to an all-day rainout on the 19th—but this didn’t dampen the enthusiasm of the volunteers and visitors. 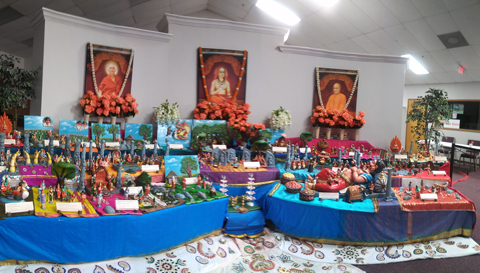 (Left) A timeline of the Ramayana was created with golus (miniature dolls). (Photo: Samir Kamat)

Inside the center, visitors were greeted with a visual treat: a display of the timeline of Ramayana in golu (miniature dolls). Significant incidents from the Ramayana were displayed from the time of birth of Sri Rama, all the way to his return from exile. These displays were a creation of the wives of priests of the Hindu Temple of Atlanta, under the leadership of Hema Bhattar, accompanied by Muralidhar M.K, one of the parents of the Mission’s Balvihar. Questions about each scene, which the children of Balvihar could answer, were set up by Balvihar student Surya and his mother Seethalakshmi Kannan. The altar was beautifully decorated with flowers and lights.

Dushera is celebrated all over India to symbolize the victory of good over evil. It is a 10-day festival—nine days of Navratri followed by the 10th day when Lord Ram killed Raavan according to epic Ramayana. Raavan is represented with 10 heads, which symbolizes the 10 vices we need to burn in order to liberate ourselves: anger, arrogance, impulsiveness, greed, jealousy, hatred, despair, indecisiveness, delusion, and lethargy. Lord Ram represents the embodiment of the ten virtues that can overcome the vices: persistence, forgiveness, integrity, modesty, kindness, love, hope, courage, wisdom, and self-regulation. 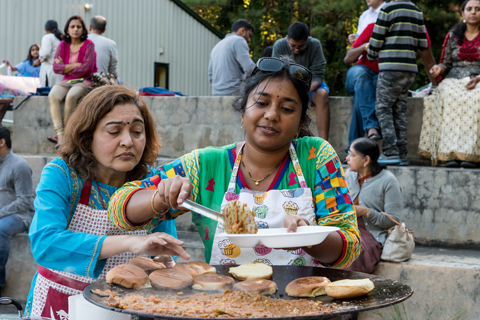 The food mela was beautifully organized in the backyard of Chinmaya Niketan. Food stalls were set up to give an ambiance of the street food scene in India. A large variety of food was meant to entice different palettes. Pakodas were being fried on a huge wok, there was corn-on-the-cob with Indian flavors, cheese and potato dosa cooked on hot tava, Sita-Ram raagi roti cooked on the stove, stuffed potato bonda, samosa, mirchi bonda. Kuzhi paniyaran was lovingly made and served by aunty Subbalaksmi ji. The many other choices such as bhel puri, chola batura, pav bhaji, vada pav, along with desserts and drinks such as gulab jamun, shrikand, chocolate and vanilla eggless cupcakes, chocolate popsicle, smoothies, lassi, hot tea, and more made it truly a food mela.

At dusk, when the food stalls closed down, aarti was done to Sri Ram, Sita, Lakshman, and Hanuman. The action moved to where Raavan was standing tall in arrogance with his 10 heads. The roughly 15- foot Raavan was built and decorated by the family of Hemant and Anjali Grandhige. The Raavan was burnt (Raavan dahan) by two young boys, Rohan and Rishab Pandya, representing Rama and Lakshman, who shot the arrows at the effigy of Raavan, which was stuffed with fireworks. The attendees, including children, stood there till the last face of Raavan tumbled down in the fire, in awe and appreciation of this symbolic victory of good over evil.