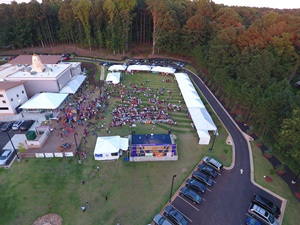 (Left) An aerial view of part of the Yugal Kunj campus.

The Radha Krishna Temple and Community Center of Duluth, GA (YugalKunj.org) celebrated its first anniversary on September 3 and 4, 2016 at 2769 Duluth Hwy, Duluth, GA by hosting a two-day mela on its serene 15-acre campus to welcome the community onto its premises. Thousands of people visited the temple both days to enjoy a multitude of activities for children and adults as well as shop for Indian items from local vendors. Each evening, in an open air amphitheater, the responsive audience filled up the green lawn and soaked in mesmerizing dance performances and a Bollywood musical concert by “Indian Idols of Atlanta.” Throughout the day, families enjoyed delicious devotee-cooked food, sweet treats, and Indian drinks. Visitors were so enthralled with open air musical and dance performances that each evening, many stayed well past the mela closing time. 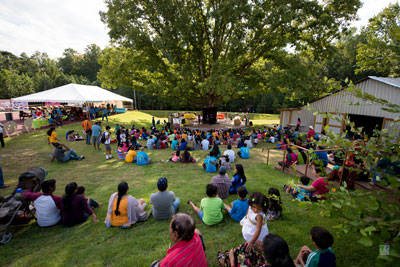 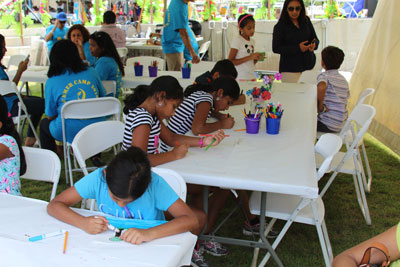 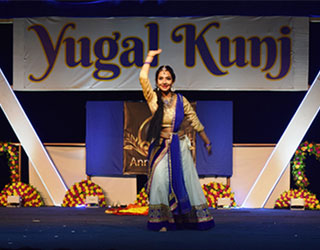 A rich cultural program began with the blessing of Didi Ji. Many dance schools from across Atlanta sent their dance teams and the audience enjoyed every bit of it. Sagnika Mukherjee (left, Photo: Dr. Panchajanya Paul, MD) enthralled the audience with her dance on a Bollywood dance medley. A classical Bharatanatyam dance was performed by Sudakshina Mukherjee and her team. Another highlight of the show was the dance performances by the students of Gurukul, who were cheered by the audience as they danced to the music and rhythm of Bollywood songs. There were also Hindu devotional songs or bhajans sung by volunteers.

On the evening of September 4 enticing melodies filled the air from a Bollywood musical concert. The winners of the Indian Idols of Atlanta gave a tribute to ‘The Great Maestros’—R. D. Burman, S. D. Burman, and Madan Mohan—with their soulful singing. 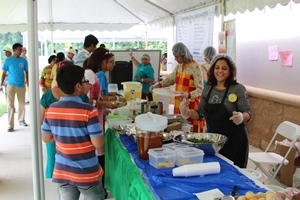 Food is a big part of celebration. Fresh homemade vegetarian food was available throughout the day in stalls run by volunteers. The delicious assortment included dosa, pav bhaji, idly, puri, samosa, chaat, and drinks such as sugarcane juice, lassi, and mango drinks. All the festival was managed by volunteers, a supreme feat.

Siddheshvari Devi ji (Didi ji or respected sister) gave a spiritual discourse. She is the founder of Radha Madhav Society, which is part of the worldwide mission of Jagadguru Kripalu Parishat. The Radha Krishna Temple began as an initiative of Didi ji, a respected figure in the US, Canada, Trinidad, and other parts of the world.

The temple is open seven days a week from 7am to 8:30pm. Besides daily religious activities, preachers offer regular spiritual discourses (in English) that include practical tips on leading a balanced life. Spiritual (gurukul) as well as overall personality development of Hindu youth (5-15 years of age) is a central aspect of the center’s mission. Classes are on Sundays in six state-of-the-art modern classrooms on campus. Many activities help Indian children growing up in the USA to understand, appreciate, and feel proud of their Indian roots and ethnicity. Classes offered this year include Hindustani Vocal, Harmonium, Bharatanatyam, Kuchipudi, Vedic Mathematics, Sanskrit, Public Speaking, Writing, Debate, etc. (Information can be found at harmonyyouthcenter.org.) The center’s premises also include state-of-the-art playground equipment for children and adults as well as a beautiful vegetable garden and walking trails for adults and seniors. 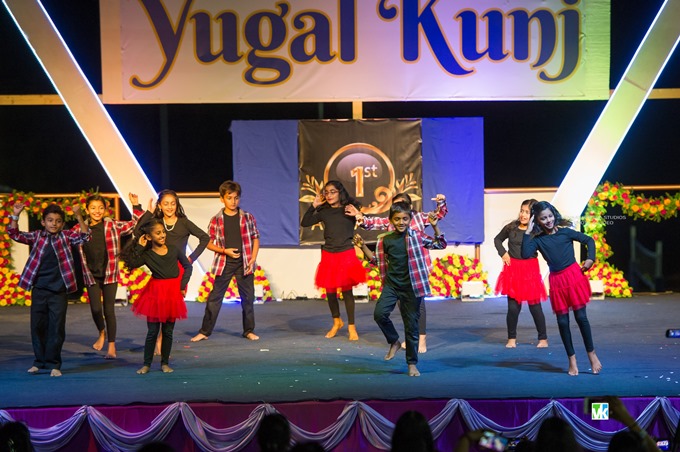 Videos:
Videos of items in the program will follow.