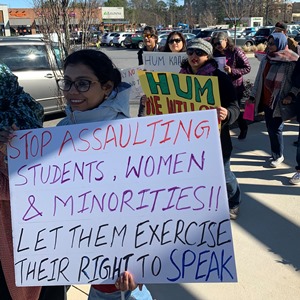 (Left) About 150 protestors marched from Whole Foods in Decatur to nearby Patel Plaza. (Photo: Courtesy ATLRejectsCAA)

On December 11, 2019, the Citizenship Amendment Act (CAA) was ruled into law in India. It extends the right of Indian Citizenship to refugees from Hindu, Christian, Sikh, Buddhist, and Parsi communities fleeing religious persecution from Pakistan, Afghanistan, and Bangladesh, who entered India on or before December 31, 2014— that is, it grants citizenship in those cases except for Muslims.

On January 19, 2020, in Atlanta, a multifaith, multicaste group of South Asian organizers in collaboration with Equality Labs brought together over 150 people who were outraged by India’s Citizenship Amendment Act (CAA) and the National Registry of Citizens (NRC). They claim that the Act threatens to drive 1.4 billion people deeper into the grips of casteist and religious nationalism. It creates an unconstitutional religious-based criteria for Indian citizenship, and in combination with NRC and the National Population Register (NPR), lays the legal foundation to denaturalize millions of Indian minorities to create the largest network of concentration camps in the world.

About 150 people marched on the sidewalk, in protest of CAA, with signs and chants, from Whole Foods, Decatur, to Patel Plaza. (Photos: Courtesy ATLRejectsCAA)

The protestors met at the Whole Foods 365 in Decatur. The speeches by organizer Nidal Karim, Ambedkarite Anil Wagde, and CAIR’s Murtaza Khwaja were powerful reminders to the crowd as they gathered together to protest for India’s secular identity—one that has been central to the nation and is enshrined in the Constitution. The protest organizers were intentional that there are parallels between Islamophobia in India and the United States. Global islamophobia and xenophobia is one of the main planks that unites White Nationalism and Hindu Nationalism. The group of 150 people then marched on the sidewalk, with signs and chants all the way to nearby Patel Plaza.

A rally supporting CAA at the Consulate General of India in Sandy Springs. (Photos: SFA Productions)

Then on Republic Day, January 26, 2020, over 200 people of Indian origin assembled at the Consulate General of India in Sandy Springs for a rally in support of the new CAA.

The lively crowd assembled in the front lawn of the consulate amidst a sea of Indian and American flags. They raised rousing cries supporting the CAA, interspersed with chants of “Bharat Mata ki Jai” (Victory to Mother India!) and “Vande Mataram” (We bow to the Mother). The gathering consisted of participants from across Atlanta’s Indian communities who raised slogans in several Indian languages including Tamil, Malayalam, Kannada, Telugu, Marathi, Gujarati, and Hindi. The demonstrators were carrying placards and posters reading “CAA inclusive not discriminatory” and “CAA grants asylum to persecuted minorities.”

According to Rajeev Menon, one of the organizers of the rally, the support rally was aimed at dismissing the “false information and myths about the CAA and to counter the propaganda of hate and lies by the anti-India organizations and media in the US.” He also stated that, instead of having a civil debate on the act, some of these organizations are determined to subvert the truth and by doing that, they are ignoring the plight of those people who had already suffered enough in these countries and had to flee for their life. “We are going to be here to defend India’s freedom, constitution, and democratic values whenever they are challenged,” he said.

Suresh Krishnamoorthy, one of those present at the support rally, dismissed the protesters as “not serious.” “Look at the language they are using,” he remarked. “They are calling it a genocide and a sign of fascism. That is an insult to the memory of the victims who were killed in real genocides—the Holocaust, and at the hands of dictators like Pol Pot, Idi Amin, and the ethnic cleansing in Bosnia or the genocide in Rwanda. Comparing a law that grants asylum to persecuted minorities with genocide means they either don’t know their history or they are deliberately being provocative by using inflammatory terms. Either way, we cannot take them seriously.”

The supporters were met by anti-CAA protesters who “seemed to be reflexively opposing it using inflammatory rhetoric without knowing the details,” according to the supporters. One protester was Ms. Nabilah Islam, a 29-year-old Democrat running for election to the U.S. House to represent Georgia’s 7th Congressional District. The rally concluded with a rendering of the Indian National Anthem by the participants.

Meanwhile, on the same day, a second protest rally was held in downtown Atlanta at the CNN Center; it drew a large crowd of over 1,500 people.

(Left) Signs at the Decatur protest underlined the importance of standing up when Muslims, Dalits, poor people, and queer people’s rights are being threatened. (Photos: Courtesy ATLRejectsCAA)

The speeches by organizers were fiery and passionate and underlined the importance of standing up when Muslims, Dalits, poor people, and queer people’s rights are being threatened.

With chants of “Azadi, Azadi” (freedom), the crowd at the second protest marched all the way around Centennial Park, Atlanta, and ended with a strong commitment to keep working together in resistance to the CAA. 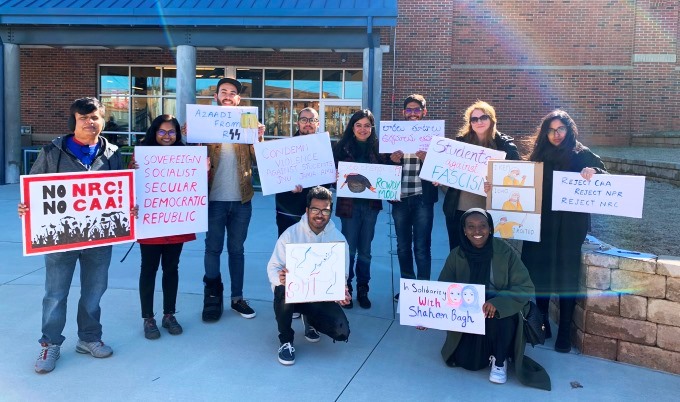 (Below) Signs at the Decatur protest, which focused on reason rather than inflammatory name-calling. (Photos: Courtesy ATLRejectsCAA)

Background on the CAA:

The Citizenship Amendment Act (CAA) is a dangerous Indian law that threatens to drive 1.4 billion people deeper into the grips of casteist and religious nationalism. CAA creates an unconstitutional religious based criteria for Indian citizenship, and in combination with National Registry of Citizens (NRC) and the National Population Register (NPR), lays the legal foundation to denaturalize millions of Indian minorities to create the largest network of concentration camps in the world.

The CAA is an integral part of the Modi government’s Hindutva ideology. Hindutva, or Hindu fascism, is a dangerous, majoritarian political ideology and far-right, ethnonationalist movement. It uses religion as a justification for caste hegemony, greenlighting atrocities against large segments of South Asians including Dalits, Muslims, Christians, Sikhs, Ravidassias, and Buddhists. Hindutva uses the claim of faith to distract from its economic agenda to concentrate power, culture, land, and resources in the hands of the oppressive upper castes. Hindu fascists believe in the racial and cultural superiority of Hindus, claiming to represent all Hindus, and believing that they are an oppressed group. Their power over India’s institutions contradicts this narrative of victimhood. They combine their cultural and political power with violence to oppress minorities, quash dissent and subvert democracy. Hindu fascists want to make India a Hindu rashtra (Hindu nation) and refer to India’s territory as ‘Bharat’ (a Sanskrit name with references in the Puranas), which they claim is their “motherland” and “holy land,” or a spiritual homeland for Hindus. They claim to be the land’s “original” inhabitants and they demonize India’s religious and cultural minorities as “foreigners” excluded from belonging to their Hindu nation.

The CAA is a central part of implementing Hindutva ideology - it is the process of creating a stateless population -- who will be profiled, treated as second-class citizens, and imprisoned in massive detention centers that are already being built in India. While it explicitly targets Muslims, it will impact many vulnerable communities including Dalits, queer and trans people, women, and the poor, as the severe requirements for documentation and the precarious reliance on local officials to be arbiters of citizenship make it a system ripe for corruption against the most vulnerable.

Link Between CAA and NRC
The CAA & NRC are designed to work in concert. The NRC is the National Register of Citizens, a soon-to-enacted new government mandated registry of all Indian citizens. The BJP government has publicly said that the CAA is designed to stop the immigration of Muslims from neighboring countries, while the NRC is meant to target undocumented immigrants. In reality, the CAA is a law that threatens India’s secular identity enshrined in the Constitution and the NRC is xenophobic and anti-immigrant at its core.

The CAA & NRC work in conjunction because the CAA shortens the requirement of residence in India for citizenship by naturalization from 11 years to 5 years for migrants covered under the Act. So far, the NRC has been implemented in the Indian state of Assam where it has designated 1.9 million Assamese stateless, including those without papers, those with mismatched names, lost documentation and people too poor to pay legal fees to contest the decision. The need for documentation under the NRC disproportionately affects the socio-economically disadvantaged and caste-oppressed in India. For more, read here.

Link between CAA, NRC, and NPR
The expansion of the CAA emerges from the proposed nation-wide NPR which requires every Indian to prove their citizenship. An Indian failing to do so would be declared an “illegal migrant” and then be assigned to detention centers. Local officials can identify persons whose citizenship is “doubtful” at will and without oversight. Additionally, the government will make one’s status public and invite objections from community members whether targeted families are indeed illegal or not. It is a system that creates widespread fear and paves the pathway for casteist, mysognist, and Islamophobic abuse. The deadly combination of the CAA + NRC + NPR would result in hundreds of millions of people losing their citizenship, which would create the largest stateless population in history.

Deportations
After putting in place the Citizenship (Amendment) Act (CAA), Union minister Jitendra Singh said that the government’s next move will be to deport Rohingya refugees, as they will not be able to secure citizenship under the new law. Rohingya refugees are from Myanmar, they will not be given refuge under the CAA. Experts have argued that these deportations violate international law and India’s domestic obligations. As South-Asia peace and conflict scholar, Angshuman Choudhury has written, “While the Indian legal system does not categorically address the issue of forced return of refugees, deporting the Rohingya back to Myanmar, where they face a severe threat of persecution, amounts to a complete violation of India’s international legal obligations and domestic judicial precedents laid down by various courts.

Videos:
At CNN, Atlanta:
“People from all faith united against #hate and #divide in the name of religion”
(Videos: Courtesy of Inderpreet Singh)