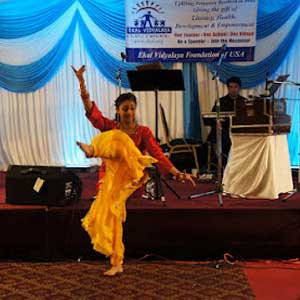 Below: Dipalee Somaiya and Samir Date sing golden oldies.
Left: Geetika Jape presents a dance of invocation that she choreographed.

It is not every day that you get a chance to make a major difference in a child’s life. What if you had an opportunity to change the future of over one million children? What if you changed their lives while enjoying a night of catered dinner, music, dancing and entertainment with live band from India? What if that chance cost you just $20? Would you take it?

Ekal Vidyalaya Foundation (EVF) asked these questions when inviting people to attend its program on March 2nd at Global Mall. Atlanta responded overwhelmingly. People came, were impressed and asked “What can I do next?” They opened their hearts and pocketbooks to sponsor 50 Ekal schools and became part of a journey to mould the future of millions of children. 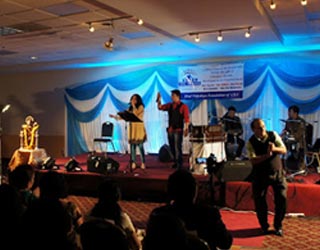 Atlantans came to enjoy the ninth show of Samir Date (Bollywood composer and playback singer) and Dipalee Somaiya (SaReGaMa winner), who are on a tour of the U.S.A for Ekal till June 3, 2012 visiting many states with their very successful program “Bollywood Milestones 1961 – 2011”—and all left the auditorium committed to join hands in the battle against illiteracy.

EVF was a wonderful host and began the event with a sumptuous dinner, thandai (almond drink), and desserts in keeping with the Holi spirit. Radhika Suda was the emcee at the venue which was decorated gratis by 5th Season. Shiv Aggarwal lit the traditional lamp, Roopa Nene beautifully sang a Ganesh Stuti and Geetika Jape invoked Lord Ganesha’s blessings through dance which she choreographed under her teacher Nilima Gaddam’s guidance.