COVID-19  In-depth info for Indians in Atlanta/Georgia. Click here
Home > Magazine > Around Town > Requiem for the dead—and the living

Requiem for the dead—and the living 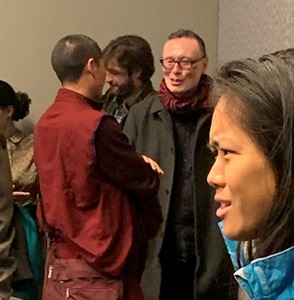 (Left) One of the directors mingling with the audience after the film. (Photo: Suzanne Sen)

I braved the rain on a dreary winter’s evening, making the trek to Emory University for a film about refugees making their way to freedom, over the mountains from snowy Tibet to steaming India—thinking on the drive of other refugees: the von Trapp family singing in the Alps in the movie version of their escape from the Nazis in World War II, the family of one of our best friends fleeing the Afghanistan of the Taliban where singing and music was banned, and the refugees waiting to cross our southern border, whose cheerful music is such a contrast to the lives they have lived of fear amidst violence.

The film, The Sweet Requiem, was well worth the trek. Not a documentary, but a suspense drama, the lyrical fiction unfolds “like a slow-burn thriller,” as a review in Film Threat described it. A young Tibetan woman alone in exile in Majnu ka Tila, the Tibetan colony in Delhi, yearns to talk to her mother and sister in Tibet and often attempts to phone them, but hears only a Chinese recorded message saying that there is no connection. Apart from work, her life seesaws between grim news of self-immolations in Tibet as the people protest their treatment by China, and the respite of going to aerobics class, where the lively music frees her to laugh and dance.

At an activist meeting, she suddenly sees the guide whom she blames for the death of her father and others on their escape route to India. Painful memories are awoken, and she relives her feelings of being an eight-year-old parted from her mother for a better life, fleeing as she and her father are shot at, and the many trials before she reaches India alone, without family. Flashbacks of being carried freezing over open snowy mountains alternate with life in the hot, narrow lanes of MKT. Suddenly, too, she is entangled with Chinese spies who threaten her and her former guide as well as both their families in Tibet. Before he is killed, the guide writes her a letter explaining what happened, and she finds forgiveness for him and closure for herself. 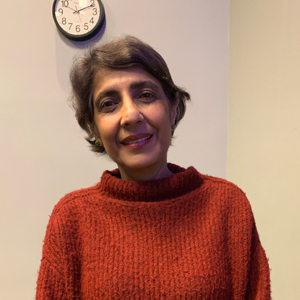 As the directors, the husband-wife team of Tenzing Sonam and Ritu Sarin, explained to the packed audience in the Q&A session, the film is based on numerous real-life events: the 2006 murder of a young Tibetan nun struggling towards freedom on the Nangpa Pass, the similar stories told by Tibetans auditioning for parts in the film, the children sent to safety in a Tibetan environment in India, and the Indian school’s realization that its graduates suffer from post-traumatic stress disorder (PTSD) even after being rescued.

Relatives of those shot and tortured by the Chinese told the directors that the story should be told. Now seventy years after the Chinese invasion of Tibet, there are Tibetans who are collaborating with the Chinese. There are spies in India. Attempts have been made on the Dalai Lama’s life, including putting poison on the hair of people going to the Dalai Lama for his blessing, when he puts his hand on their heads. Tibetans are threatened that their family members in Tibet will be hurt or killed, and communication is monitored so that phone calls are usually simply, “Are you well?”

There are only about 6 million Tibetans, and it is estimated that the Chinese now outnumber Tibetans in Tibet. About 160,000 Tibetans have found life in exile, with about 100,000 of them living in India.

A requiem is music or a religious service for the dead, a remembrance. While resting on the trek over the mountains, one of the film’s characters sings a song for the homeland they are leaving. Not all of them make it to freedom.

Links:
Indian-Tibetan couple present two films at Emory University: When Hari Got Married [2012] and The Sun Behind the Clouds [2009]
By Suzanne Sen
May 2014
http://www.khabar.com/magazine/around-town/indian-tibetan_couple_present_two_films_at_emory_university_when_hari_got_married_and_the_sun_behind_the_clouds

A list of works by Ritu Sarin and Tenzing Sonam
http://whitecranefilms.com/work/