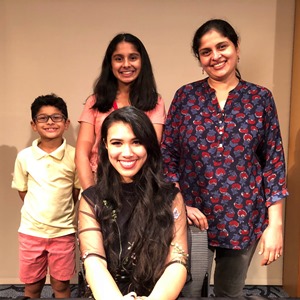 (Left) Author Roshani Chokshi with some of her fans at the Carlos Museum.

The Michael C. Carlos Museum event on September 28, 2018 brought out a crowd diverse in age and cultural backgrounds. Parents brought their elementary and middle school children, Emory students brought their friends, some of Ms. Chokshi’s favorite Emory professors came to see their successful student, and Ms. Chokshi’s supportive, Atlanta-residing parents sat smiling and laughing in the back of the room.

After leading a tour through the Carlos’ South Asian gallery for a select few guests, an audience was seated in the museum’s Ackerman Hall. Chokshi spoke animatedly about the journey that led her to write mythology-based stories.

In a particularly impactful lesson, she asked the audience, “How many of you have heard of Zeus?”—many, if not all hands were raised. “Odin?” –many hands were raised. “Osiris?”—fewer hands. “How about Ganesh?” —only the hands of the Hindu attendees and a few well-educated attendees went up at the mention of the Hindu god of auspiciousness and new beginnings. That demonstrated much of what Chokshi spoke about that evening—just because certain mythologies and folk-tales aren’t commonly found in children’s literature, doesn’t mean we can’t write those very stories. Her motto seems to be, if you don’t like it, change it. Reflecting on why she chose to write Hindu mythology in a modern setting for the “Aru Shah” series, she said, “I believe we all deserve to see ourselves as the Chosen Ones of our own stories.”

The children seemed particularly engaged in the event, compelled by the author’s earnest advice and captivating storytelling. A crafts table was set up outside the Hall, where children molded diyas out of clay, to represent the cursed diya in her children’s novel, Aru Shah and the End of Time. After Ms. Chokshi’s presentation, attendees stood in line to get their copy of the book signed.

Ms. Chokshi was truly at home that Friday evening. In addition to being an Atlanta native, an Emory alumna, and a frequent visitor to the museum’s galleries during her time at Emory, the Carlos Museum is special in one more way. Elizabeth Hornor, Director of Education at the Michael C. Carlos Museum and organizer of this event, invited the author to promote her book at the museum as soon as she found out that this museum was the inspiration for the Museum of Ancient Indian Art and Culture depicted in Chokshi’s middle-grade mythological success, Aru Shah and the End of Time, which she had come to promote. Chokshi admitted that this event was one of the best she’s ever done, as the audience could clearly see in her never-faltering smile and enthusiasm throughout the evening.