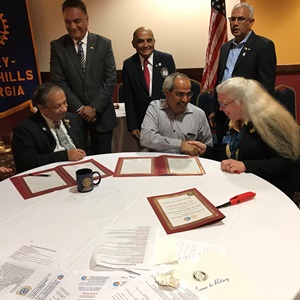 While many folks are starting the second half of their calendar year on July 1, the Rotary Club of Emory Druid Hills is beginning their fiscal year. Not only is July 1 the first day of Rotary's fiscal year, this date marks the beginning of this relatively young club's 10th Anniversary Year. 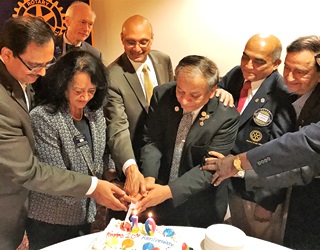 A sister club MOU was signed in this meeting with Rotary Club of Borivali to enhance the possibility of more effective service program partnership.

A special award was presented to Dr. Pradip Kansagara and Shri Rameshbhai Suhagia for their donation worth $130,000 plus for service projects in India.

Rotary represents greater than 1.2 million individuals around the world, making them the largest single service organization in the world. Rotary's motto is "Service Above Self" but can readily be described in six words: Join Leaders, Share Ideas, and Take Action.

Speaking of Taking Action, "Our club is very active both locally and internationally," exclaimed PP Upendra Bhatt, the club's president during the 10th Anniversary year.

Upon asking to briefly describe what service projects are done through this club and Rotary International, Mr. Bhatt replied that in the past 9 years …
We are proud of our Service Projects
Community Service
· Gifting a Bus to Church for Students
· Honoring various Service Officers of Georgia
· Planned Health Camps and Blood Donation Camps
· Planned Kids Care Fair at Local School
· City of Norcross Declared 23rd February as “Rotary Club of Emory Druid Hills Day” in a Proclamations presented by Mayor.
International Service
· Joined with Sister Rotary Club to Provide Safe Drinking Water in a village in a Rural India Project cost 200K plus. (Completed)
· Joined with India Club to Provide Hospital with 9 Dialysis Machines in Rajkot, India. Project cost 260K plus. (Completed)
· Joined with another India Club to Project to Provide CT Scan Machine to a Hospital. Project cost 200K. (In making)
· Joined with another India Club to Project to Provide Urology Department to a Hospital. Project cost 423K.
· Supported 1000 plus Eye surgeries in various parts of India. (Completed)
· Supported a Medical Camp in Cuba. (Completed)
· Supported District Efforts Help victims of Haiti Earthquake and assist in developing various district goals. (Completed)
· Supported 3-H Projects – Health Camps 3 Camps almost every year. (ongoing)
Vocational Service
· Supported Education and Literacy Locally and Internationally
· Adoption of Community School a local School.
· Donating Science Laboratory Equipment’s and School Bags to needy Schools and Children.
· Distribution of Computers in Deaf and Dumb School, Amreli, India.
· India Adoption of a School in Rural India.
Districts Projects Supports
· Project in India - Literacy
· Participating in PETS & District Conference
· 100% Districts Projects Supports
· Hosted inbound GSE Team and Rotary International Friendship Exchange Team from India
· Commitment to be a Harris 100% Paul Harris Fellow Members Club
· Commitment to be a Member of our District Sponsored Action Group RAFFA
· Commitment to be a Contributor of Great RI Project Polio Plus
RI Fellowship Supports
· North American Council of RI Fellowship of Cricketing Rotarians, a Legitimate RI Fellowship (IFCR), is one of our Star Fellowship Projects, that coordinate Fellowship through the game of cricket. This project is originated by our club and we are proud to lead this Fellowship under the Chairmanship of PP Upendra Bhatt in all 29 countries of North America.
RI Sister Club Fellowships
Our club has established Sister Club Relationships with 6 clubs of various international Rotary districts of the world. Our sister clubs are
· RC Rajkot, R I Dist 3060
· RC Surat, R I Dist 3060
· RC Bombay Sea Coast, RI District 3041
· RC Jamnagar, R I Dist 3060
· RC Ahmedabad, RI District 3054
· Rotary Club of Mumbai Green City, R I District 3041
· Rotary Club of Coimbatore Ikons, R I District 3201

"So the projects just described do not just happen," President Upendra said. "The club accomplishes these projects primarily through annual fundraising events, Club members' dedicated vision of Service above Self, community individual donation, and District and Rotary International Foundation support.

Rotary has a Foundation that all clubs and individual members support financially. The funds received by the Rotary Foundation are used for many goodwill projects around the world, the eradication of polio being the primary project. However, a portion of those funds are redirected back to area clubs in the form of grants to support various club projects. As a result of this club's fundraising, collaboration with other clubs financial supporting our international projects in collaboration, coupled with grant funds received from the Rotary Foundation, the Rotary Club of Emory Druid Hills has raised and supported nearly $1M worth of projects in our community and internationally.

“When you’re a part of Rotary, you’re really making a difference, both locally and internationally,” Burton said. “When you think about all the wonderful things Rotary has accomplished, who wouldn’t want to be part of one of the most successful humanitarian organizations in history?” Mr. Upendra Bhatt said. “48 years ago, in Surat India, the look and passion I saw on every Rotarians’ face--I thought, ‘Wow. I want to be part of this, too,' and had a most amazing life experience,’’ he said.

If you have a desire to "Join Leaders, Share Ideas, and Take Action," please join other like-minded individuals and attend for a lunch meeting on every Wednesday noon at 12:15 p.m. at the Ashiana Restaurant, Global Mall, 5675 Jimmy Carter Blvd., Norcross, GA 30071. President Upendra Bhatt also invited new members to contact him at 678-478-2578 for more information about how to be a part of this service to the humanity. "We look forward to seeing and/or hearing from you," Mr. Upendra Bhatt said.