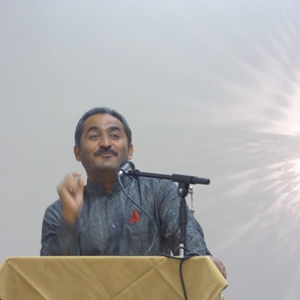 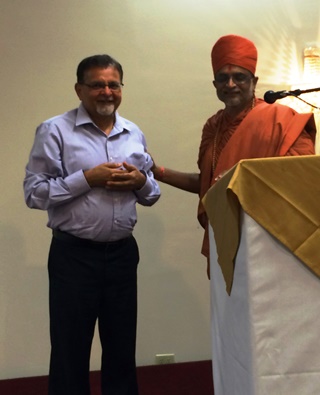 Before the main program, a riveting slide show was projected about the hospital and its many impressive activities. After a sumptuous dinner, kidney specialist and urologist Dr. Pradip Kansagra, Founder and Chairman of the hospital and institute, described the state of the art, nonprofit tertiary kidney center spread over three acres. Annually it deals with 22,100 OPD patients, over 4500 IPD patients, performs over 4,530 surgeries, over 25,720 dialysis treatments, over 14,000 free dialysis treatments, and organizes free uro-surgical camps. The hospital is recognized by the Govt.of India for its DNB Urology residency program and nursing school.

At an AAPI Convention in San Antonio, Texas, when a research paper was presented and won First Prize, a donation of $2000 was made by Dr. Jayshree Jagirdar, matched by RCEDH, doubled by the Rotary Foundation India, and quadrupled by Rotary International. This $16,000 helped the hospital buy a dialysis machine.

Seasoned comedian Dr. Jagdish Trivedi then kept the audience in stitches with his flurry of rib-tickling jokes. Dr. Trivedi is a globe-trotting Gujarati: he has performed in 38 countries and is currently on his 16th U.S. tour. He has authored 46 books of Gujarati comedy, plays, and poems, six of which have won Gujarat Government’s Awards. He has released over 76 CDs, DVDs, and videos of his jokes, poems, etc., and has even written scripts for TV serials and movies.

His jokes, devoid of any vulgarity, were based on a keen sense of observation and nuances of daily life. A wife told her husband, “Today when you return home, press the doorbell with your elbow.” “Why, am I handicapped!?”asked her husband.” Well, it is my birthday today and I know your hands will be full with my gifts,” replied his wife. The audience was about to be treated with paan-flavored ice cream from Mamtaben and Janakbhai Patel, so Jagdishbhai cracked a joke about ice cream: when one man was giving an ice-cream treat, he welcomed each person by putting a red tilak (dot) on his/her forehead, his wife stuck a few rice grains on it, and then the servant gave ice-cream to that person—all looking very praiseworthy till the servant confided that the red dot was not washable red powder but red oil paint, to ensure that no one got more than one free ice-cream! In addition to numerous jokes, Trivedi also recited poems, recounted a story about prankster child Krishna, and, since the program coincided with India’s Independence Day, Trivedi also paid tribute to India’s exemplary leaders such as Mahatma Gandhi, Sardar Patel, and Lal Bahadur Shastri, who selflessly fought for India’s freedom. 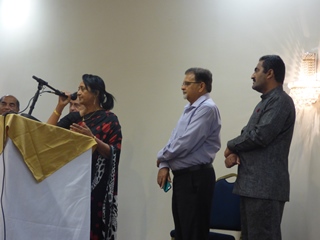 Attendees were encouraged to donate, especially using matching grants, for the benefit of the hospital and other Rotary projects such as water projects in India.

H.H. Madhavpriyadasji remarked that along with big temples there is also a need for more hospitals, saying that the poor can get help from the Government and the rich can afford medical treatment, but the middle class needs help as well. He commended Dr. Pradip Kansagra and his team at the hospital and said, “The hospital treats our camp’s patients with equal care and compassion,” and he blessed Dr. Kansagra on his birthday, wishing him health and happiness.