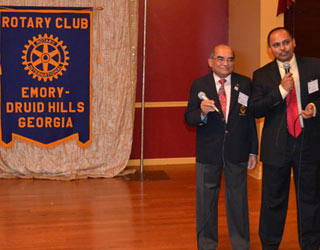 The Rotary Club of Emory Druid Hills celebrated its fourth anniversary and inducted new members at a Christmas Dinner Party at the Palace Restaurant on December 13, 2012. Members mingled along with family and friends during the social hour, and met with the recently elected President of the Club, Chittaranjan Jyotishi, officers, and committee directors. 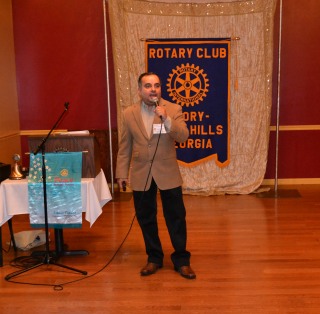 Chittaranjan Jyotishi emceed, and began the program by inviting his son Rajesh to sing a song from his album, Carpe Diem (Seize the Day). He sang “Immune” from his upcoming CD, an apt song for the occasion, with uplifting lyrics exhorting all to lend a helping hand during the current economic downturn and natural calamities. (Photo on the right.)

Various Rotarians gave their experiences with ongoing humanitarian projects and the Rotarian principles behind them.

President-Elect Ravi Chander commended attorney Dr. Chandler Sharma and his wife, Dr. Paddy Sharma, for their support in his goal of helping at least a thousand villages in India to get safe drinking water. Matching grants triple the donations, and with an international partner, it increases sixfold. International partners in Hyderabad and Secunderabad have helped the club complete 200 such projects and help about 5 million people.

Treasurer Hemang Desai responded by requesting all to enrolling as members and support the Club, and Dr. Chandler Sharma noted that Rotary is about the Four Way Test, which should guide one in private and professional life:
(1) Is it the truth?
(2) Is it fair to all concerned?
(3) Will it build goodwill and better friendships?
(4) Will it be beneficial to all concerned?

Dr. Paddy Sharma spoke about her experiences with Meals on Wheels and with giving dictionaries to third graders. Past President Roger Williams lauded her for founding this Rotary club in 2009. He commented on his joy when delivering toys to a women and children’s shelter in Atlanta: “Life is about what you do, whose life you touch—so commit yourself to help others.”

After dinner served by the Palace Restaurant, chief guest Donna Turner spoke. She was Assistant District Governor and has been a Rotarian for over 18 years. With a Rotary Fellowship, she traveled to Rajkot, Bhavnagar, Ahmedabad, Ankaleshwar, and Surat in Gujarat. Excited to see service projects of a magnitude she hadn’t seen before, she declared, “Life is not about success. It is about significance.” Try to make a significant difference in the lives of others. “This Chapter will be an inspiration to all other Chapters in the U.S.,” she said. 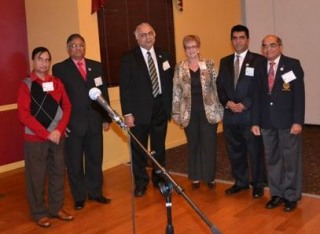 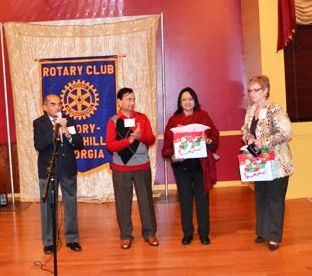 Ms. Turner participated in the induction of three new members—Mehul Raja, Palm Sheikh, and Rev. Dr. Dalip Kumar—and was herself, along with Dr. Paddy Sharma, honored for service and commitment.

A power point presentation prepared by President Jyotishi was run continuously to identify what Rotary is about and club goals and ambitions. President Jyotishi concluded, “Together we will alleviate poverty by providing education; eradicate sickness like polio, AIDS, and leprosy; provide clean water and efficient sanitation, and more. … Let’s learn and work together; work and take a task one at a time and be real Rotarians. … The mission and motto most Rotarians practice—‘Giving is better than getting,’ and ‘Always give more than expected.’”