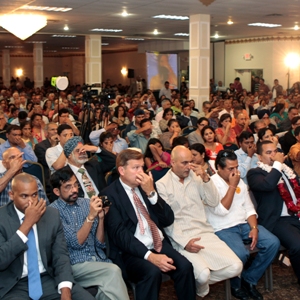 The event, ‘Baba Ramdev on Yoga and India’s current challenges’ was attended by over 1,400 community members, Atlanta officials, and dignitaries, who gave a rousing standing ovation to bearded, pony-tailed, orange-clad, charismatic, smiling Swamiji.

Global Mall owner Shiv Aggarwal gave the welcome, saying that Swamiji has a following of over a hundred million yoga enthusiasts worldwide who attend his yoga camps or follow his yoga lessons on videos, CDs or India’s Aastha and Zee T/V channels.

Mayor Bucky Johnson garlanded Swamiji and said, “We are so honored to have you here and to receive your blessings.” He presented a proclamation from the City of Norcross commemorating this visit to Atlanta. 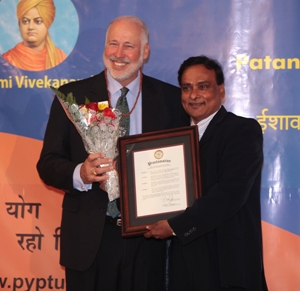 Norcross Mayor Bucky Johnson and Nitin Shah with the Proclamation.

Atlanta’s hotelier and banker Nitin Shah presented a bouquet to Mayor Johnson. Bouquets were also presented to the Director of Atlanta Revitalization Program, Emory Morsberger; Trustee of PYP (UK) Shravan Poddar who had travelled all the way from Scotland to attend the event; President, PYP (USA) Shekhar Agrawal; and Braham Aggarwal. Sneha Mehta assisted them in lighting the ceremonial diya.

Swamiji greeted all and recited Gayatri Mantra and Maha Mrityunjaya Mantra. Because of his jovial nature and humor, he had an instant rapport with the audience and all joined in chanting the mantras, to the accompaniment of flute by Nagaraju from Andhra Pradesh. Atlanta’s Madhavi Dave sang a bhajan. He immediately complimented the audience for its warmth and enthusiasm, “I feel as if I am in India!”
Swamiji led all in singing the bhajan, “Prabhuji itni si daya kardo.”

“The ultimate goal of yoga is inner enlightenment, inner transformation, and self-realization,” Baba Ramdev said. “Physical postures which evolved into asanas are used to alleviate health problems, reduce stress, and make the body supple and healthy. Breathing exercises help in flow of vital energies.” He said that yoga cannot be learnt through books but practical exercises. He emphasized patience and persistence in practice, positive thinking, healthy, nutritious and balanced eating, avoiding health-endangering habits like alcoholic drinks, drugs, smoking, or chewing tobacco, etc., and warned that there are no quick fixes or short cuts. It is heartening that yoga has become highly popular in the U.S., and it is now legally confirmed that it is not religious but a secular practice. Yoga is universal and open to all.

Baba Ramdev lauded the U.S. for becoming a super power in a short period of about seventy years (after World War II). He said that a corruption-free India also has the potential to become world’s leading nation in twenty to twenty-five years. He praised the Indian community in the US. A mere 2.5 million Indian-Americans now have highest per capita income. He exhorted all Indians to remember Swami Vivekananda’s rousing words, “Uttishthata jagrata…” – Arise, awake, and stop not till the goal is reached. And make impossible possible. He said that just like Dr. Martin Luther King, he also had a dream—to see India become a leading nation and to spread yoga across the world.

Swamiji demonstrated eight types of breathing exercises and explained the benefits of each. He even encouraged the audience including the dignitaries to do the Pranayama exercises like Bhastrika and Kapalabhati. It was amusing to see the audience trying to practice Ujjai with him. 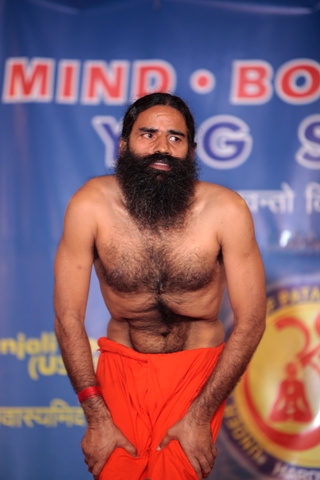 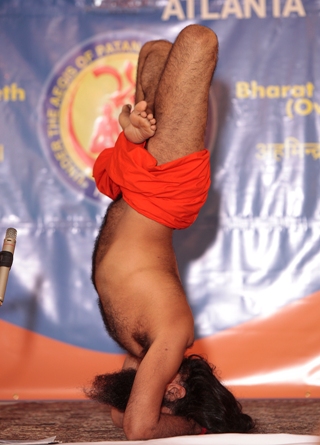 Baba Ramdev astounded the audience with his demonstration of various yoga positions (asanas). He began with Surya Namaskar (sun salutation). Then he demonstrated some basic asanas and later advanced and complex ones like Nauli Kriya. The audience enjoyed it all and gave repeated applause.

Swamiji emphasized that yoga has a spiritual component, too, and it teaches vasudhaiva kutumbakam, which means that the whole world is one single family. All joined in singing another bhajan “Bhagawan aryonko esi lagan laga de.”

Swamiji invited all to visit Patanjali Yogpeeth in Haridwar to learn yoga and to train to be yoga teachers. This institution is set up for treatment, research, and development in yoga and Ayurveda as well as the manufacture of Ayurvedic medicines. It is also the home of the University of Patanjali. He urged all to subscribe to Aastha TV Channel and practice yoga daily with him. He showed Ayurvedic products and herbal supplements like chyavanprash (a tasty mixture of herbs and spices), amla and aloe vera juice, massage oil, hair oil, tooth powder, and churnas (spice mixtures), and recommended buying medicines, books, CDs, and DVDs or ordering online from Baba Ramdev Health Products in Global Mall.

Patanjali Yogpeeth has been engaged in relief work, he said, for Uttarakhand disaster affected areas like Guptkashi, Rudraprayag, and Joshimath, etc. They have also adopted about 100 orphan kids (who lost their parents in the disaster) and stationed them in Utharkashi and admitted them to schools. He requested donations for these humanitarian efforts.

A lively and informative Q& A session followed. Three hours just flew and no one was prepared to leave! “This time I could only come to Atlanta for two days but next time I will arrange for five days at least,” he declared.

Over 350 yoga enthusiasts attended Swamiji'sYog Shivir on Tuesday morning at Global Mall. It was a most memorable visit with Baba Ramdevji. Comments included “Just mindblowing. Baba Ramdev is amazing. He had an instant rapport with the audience. For me it was an invaluable life-enriching experience. I am thankful I did not miss this event.”