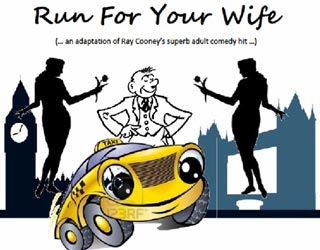 Run for Your Wife is play so entertaining that it had a nine-year run in the West End of London from 1983 to 1991. An adult comedy by Ray Cooney, it tells what happens when a London cabbie, who schedules his life in his diary very carefully—because he is juggling a double life with two wives in two homes—has to go to the hospital, and both addresses are found! Panic, chaos!

IACA presented Shyam Yellamraju’s adaptation of this superb farce on February 2, 2013 to a sold-out house. Nivedita Garabadu played one wife, Mary Smith, and Fazleen Sohani played the other, Barbara Smith. Fazleen even sounded British! Swaroop Nyshadham played the main character, cab driver John Smith; Sam Prasadh was his neighbor Stanley Gardner, living in the flat above. The script and acting were wonderfully funny, and with cordless lapel microphones for the actors, the audience could hear well—a much appreciated factor.

If you missed seeing this hit at the ICRC, you could try the new 2013 movie, directed by Ray Cooney. Unfortunately, cameo appearances by more than 80 celebrities donating their fees to a theatrical charity could not ensure that this movie was a hit—so far it has bombed. So it might be better to ask IACA for an encore performance!