Saadia Faruqi: a Muslim woman dialogues for hope and peace 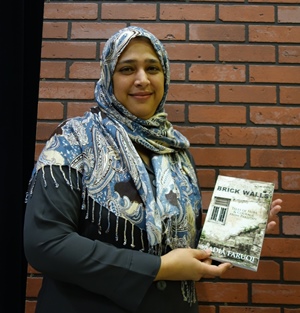 On November 21, 2015, Saadia Faruqi was sitting in the Atlanta Interfaith Broadcasting studio, being interviewed by Kelly Wentworth for Muslims for Progressive Values. She had left her child and husband in Houston, Texas to come to Atlanta to combat stereotypes. After a brief interview with NBC’s 11Alive News, she was in a longer interview and book signing, sharing her heartwarming collection of short stories from her book  Brick Walls: Tales of Courage and Hope from Pakistan. 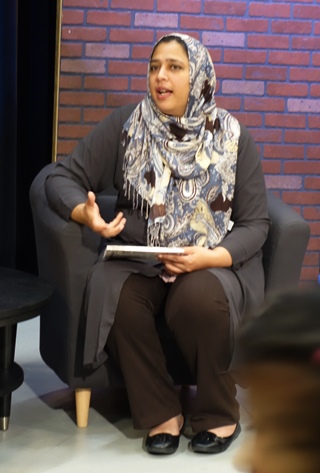 How did she come to write the book? Saadia has been writing short stories for some time, and is editor-in-chief at blueminaret.com, a literary journal chronicling the Muslim experience—but stereotypes gave her even more purpose: bringing people together. When people hear “Pakistan,” they think of violence and when they hear “Islam,” they think of terrorists. Her mosque in Houston has been vandalized, and Muslims every day are faced with prejudice. So Saadia wanted to do something for her community. She decided to have the courage to speak out for peace through interfaith dialogue. She has led police trainings for cultural understanding. She writes for HuffPo, NBC Asian America, Tikkun Daily, and more.

And she is now receiving hate mail. But her book is simply filled with fictional depictions of everyday Pakistanis who struggle with poverty, violence, corruption, and abuse, yet rise again stronger and show the beauty of Pakistan and its people; it is not preachy, but realistic and positive. With stories, people can read or listen, and understand—“the human touch, that’s the power.” With the book and her talks, she opens the door to the understanding that Muslims are just normal people even though they may dress differently or have a different religion. “It is ok to believe different things,” she says. “We’re all really the same, struggling to just live our lives. If we can go peacefully and let others do the same without any violence, imagine what a world we would live in.”

A blog on shattering some stereotypes:
“Pakistan Is Not the Place Americans Think It Is”
http://www.huffingtonpost.com/saadia-faruqi/pakistan-is-not-the-place_b_8740864.html

An interview at Dos Twinjas about diversity in fiction and more:
http://twinjabookreviews.blogspot.com/2015/12/twinja-book-reviews-3rd-annual_8.html