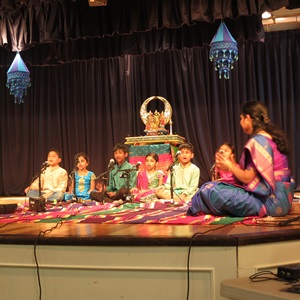 The Carnatic Music Association of Georgia (CAMAGA) celebrated Great Composers’ Day on February 13-14, 2016 in memory of the Great Composers of Carnatic music who contributed immensely to its prominence. Participants were young children and their teachers and other adults from the Atlanta area. It was a memorable opportunity for them to honor Great Composers of Indian music, while demonstrating their own talent in classical music. The function started, as always, on time. After the children’s performances, the teachers and other local musicians gathered on stage to sing the Pancharatna compositions, led by Mrs. Usha Balakrishnan. The Pancharatnas are five compositional masterpieces composed by Saint Thyagaraja that were notable not only for their musical beauty but also for their profound messages. Then invited artist Sri V. Lakshminarayanan gave a solo violin concert, accompanied on mridangam by Ram Sriram (below). 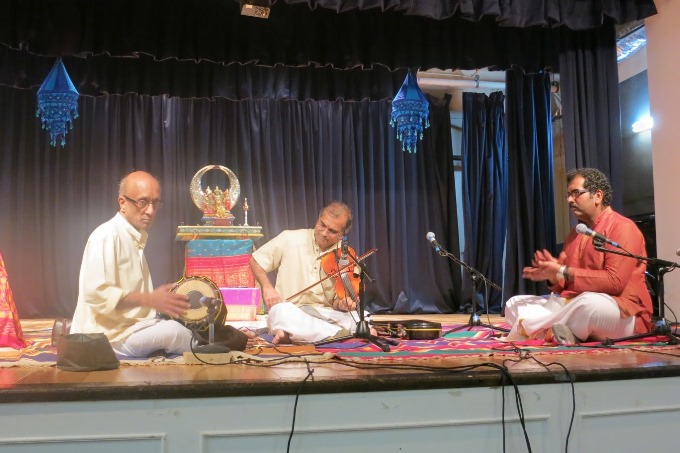 This was CAMAGA’s nineteenth consecutive annual Composer’s Day celebration. In the early years, it was organized as a half-day function, but with the enthusiasm shown by local teachers, parents, and their children, it has since grown to be a two-full-day event. Nearly 200 children and adults participated this year.

The event concluded with singing of the Utsava Sampradaya songs. As Mr. P. Sreenivasan, musicologist, expresses, these compositions provide a means to elevate oneself to a supra-personal level; through music, he says, one can traverse the path towards salvation.

Emcee Dr. Kalpana Rengarajan excellently guided the function from start to conclusion in an orderly and timely manner. Special mention should also be made of Dr. Ram Sriram, President, who has been directing CAMAGA since its inception.