Salman Rushdie considers the “wonder tales” of the East 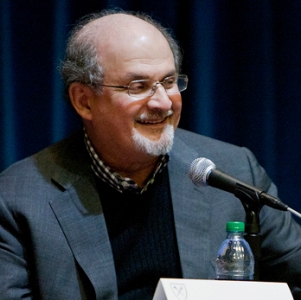 Emory’s inspiring Glenn Memorial Auditorium was an appropriate setting for a talk by University Distinguished Professor Salman Rushdie on Sunday, February 16, 2014. A former church, it lent its atmosphere to Rushdie’s thoughts on literature, religion, politics, and the truths of life.

In his eighth year at Emory, Rushdie is known as a humorous, sharp, and thought-provoking speaker, and a teacher with depth and seriousness, as well as breadth: his impact goes beyond the English Department to film, history, South Asian studies, even to neuroscience—in the discussion of the neurological foundations of the creative process, for example—and beyond the Arts and Sciences to topics on business, cross-cultural communication, and violence. A proponent of liberal (from the Latin for “free”) education, he is free to explore a complex world.

In his memoir Joseph Anton, Rushdie describes how his father told and reinvented tales from the “wonder tales” of the East—the Mahabharata, Ramayana, Panchatantra, Katha-Sarit-Sagar, Arabian Nights, and more. From this he learned two lessons: that stories can be metaphors, not true, but making you feel and know truths; and that stories are living, “yours to alter and renew and rejoice in,” both giving you life and receiving life from you.

He reminisced about how different Bombay was in his childhood days. Ganesh felt like a symbol of joy and unity for the city, rather than religious; the blurring of religious boundaries then was very different to the sectarianism today. Then also, everyone knew the old stories from the Greek and Indian classics and the truths they taught—but the influence of the tales is not always positive, as, for example, the BJP now fantasizes about return to the old, and the politicization becomes a dangerous affair. The Wendy Doniger incident, he said, is a sharp contemporary illustration of this. “Crossing the line of Lakshman” or overstepping, “going too far” can have dire consequences in this climate. Another example is that too many men in India still believe in limits for women, and an Indian politician even commented that the Delhi rape victim should not have “crossed the line.”

Turning to the “wonder tales” of the 1001 Nights—which came, he said, from India west to Persia, then to France, England, and Hollywood, changing as it traveled—he focused on some down-to-earth details: the number of women killed (over 3000) and the final deaths of the two brother perpetrators, per- haps at the hands of the sisters who were their wives or perhaps at the hands of the wives’ father.

Stories of the Panchatantra’s jackals are also violent, putting to rest “the clichéd idea of the peaceful, mystical East.”

Where is fiction going now? “We live in an age of nonfiction,” he said. Serious fiction has turned toward realism. For newness, “turn to irrealism” for it is only by dreaming that we get fiction more interesting than facts.