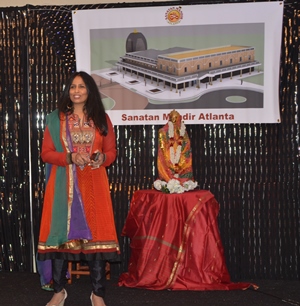 The oldest Hindu temple in metro Atlanta not belonging to any particular sect—the Sanatan Mandir in Smyrna, part of IACA—has started construction of the new mandir on its existing land. To see the fulfilment of this auspicious undertaking, the Trustees, Board of Governors, Executive Committee and the priests hosted a fundraising event at the Holiday Inn on Holcomb Bridge Road on June 28, 2015.

Inspired by a devotee’s desire to host a small dinner party at his residence to raise funds for the new mandir and the willingness of a few others to do the same in various suburbs of Atlanta, the idea took hold of having a collective effort to raise awareness and raise substantial funds. 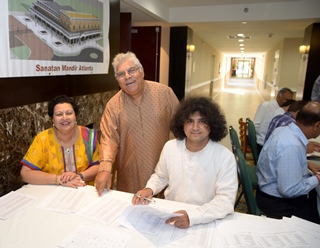 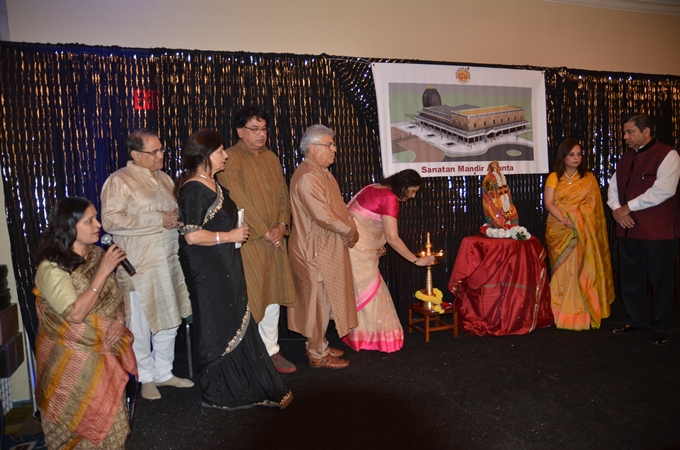 The evening began with a warm welcome by Sanatan Mandir President Dr. Amita Dave followed by lighting of the traditional deepak by Mr. Vir Nanda – Chairman of the Board, Mr. Ani Agnihotri – Chairman of IACA, Mr. Vish Ganti – President of IACA, and Mrs. Devyani Desai – Board of Trustees and past President of Sanatan Mandir. Mrs. Madhavi Dave recited the Ganesh Stuti. Invoking the Mahalaxmi mantra, volunteer priest Praful Desai explained that Mahalaxmi’s blessing are obtained when hearts are united for a common noble purpose and there is willingness to offer one’s all—time, skills, and wealth—for such endeavor. 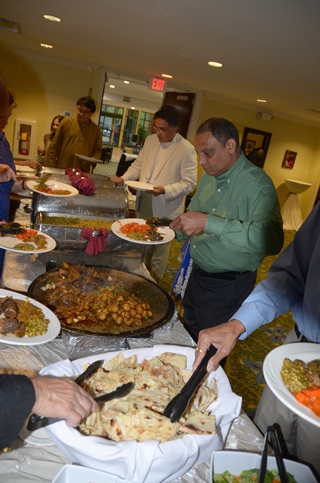 Mrs. Sucheta Kamath was emcee for the evening. A cheerful and bubbly personality with knowledge of neurosciences, she gave a presentation on the temporary nature of objective happiness contrasted with the pleasure of subjective happiness, ending her Powerpoint presentation with the thought that the new mandir proposes to be a source of such subjective happiness. She then described the design and functionalities of the new mandir and shared the revised cost of $2 million including a shikhar and embellishing inside and outside of the mandir with Indian architectural details.

Response to the fundraising was overwhelming. Donations rolled-in for prayer hall, kitchen equipment, deities, columns, bricks, and general construction. More than $300,000 was pledged. The evening concluded with a delicious dinner provided by the Palace restaurant.