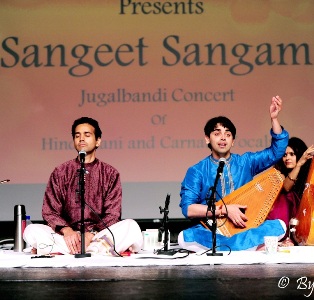 On Saturday evening, August 24, 2013, the student center auditorium at Southern Polytechnic State University in Marietta was filled with applause from the audience as they enjoyed “Sangeet Sangam” (meaning "a confluence of singing") a unique jugalbandi concert of the two styles of Indian classical music: Hindustani (from North India) and Carnatic (from South India).

The first of its kind in Atlanta, this concert brought together the best of musicians from both genres: Shri Pritam Bhattacharjee presenting Hindustani vocals and Shri Salem Sriram presenting Carnatic vocals, with accompanists Shri Prithwiraj Bhattacharjee on tabla for Hindustani, and for Carnatic, Dr. Ram Sriram on mridangam and Papanasam K. Gokul on violin. Mahua Banerjee and Amitava Sen rounded out the Hindustani music on tambura and vocals, and harmonium, respectively. 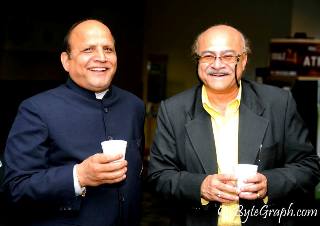 Mr. Rajinder Singh, Consul and Head of Chancery, Consulate of India in Atlanta, and Subash Razdan.

The event was inaugurated by Chief Guest Mr. Rajinder Singh, Consul and Head of Chancery, Consulate of India in Atlanta, and Special Guest of Honor Mr. Subash K. Razdan, a 2013 winner of India's Pravasi Bharatiya Samman Award. Emcees Madhu Deshmukh and Anjali Nagrani presented information on the music, and Arati Reddy introduced the audience to the organizer Eshana Enterprise and to Prajwala, the nonprofit to whom some of the proceeds of the program were directed.

Eshana Enterprise organizes arts and cultural events, as well as promoting awareness of social issues and supporting organizations or individuals who, despite facing challenges, become role models for society and make a difference in their situation or surroundings. Dr. Sunitha Krishnan's anti-trafficking organization Prajwala helps in preventing women and children from entering forced prostitution or sexual slavery. 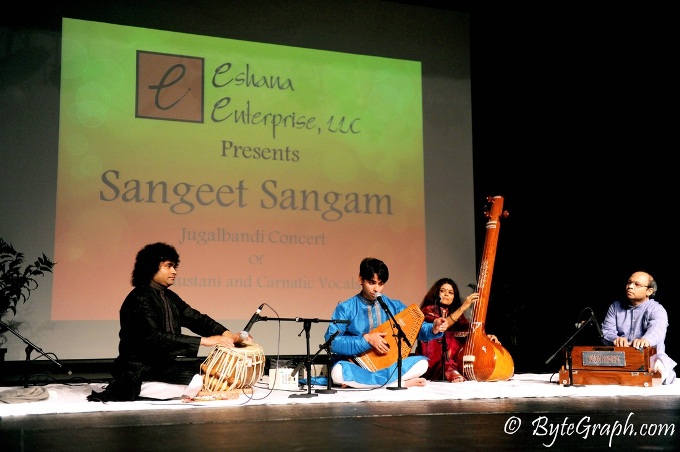 The evening's performances began with Shri Pritam Bhattacharjee giving a solo presentation of Hindustani classical vocals. One of the most accomplished and acclaimed Indian Classical vocalists of his generation, he is a disciple of Sangeet Martand Padma Vibhushan Pandit Jasraj ji. Pritam presented raag Miyan Malhar beginning with “Baba Tope Barasat Karim Raheem” composition in slow tempo (vilambit), followed by fast tempo (drut) bandish “Umad Gumad Ghana Garaje Barasa.” His melodious rendition included skillful taans. Shri Prithwiraj Bhattacharjee, a disciple of both the great tabla maestro the late Ustad Alla Rakha and of Ustad Zakir Hussain, is one of the most talented and sought after tabla players of his generation. The audience was awestruck by Prithwiji’s skillful and flawless delivery of complex rhythm cycles and patterns presented in slow as well as fast tempo. As articulated by Mr. Razdan, “The music program was out of the world. … What a treat from Pritamji for the rejuvenation of our body and soul. … He is one of the best in the world, Atlanta’s Tansen.” 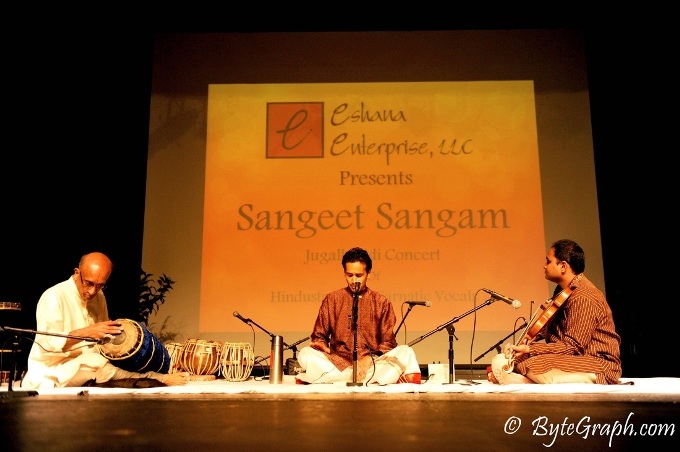 The second solo in the first half was presented by Shri Salem Shriram, a disciple of Sri Calcutta K.S. Krishnamurti, referred to by many music pundits in Chennai as one of the brightest prospects among young Carnatic vocalists today. Salem Shriram, a top-graded artist of the All India Radio, and a prominent performer both in India and the US, has won many recognitions including the best vocalist award from the Madras Music Academy and the Central Government of India's scholarship for advanced learning. Shri Salem presented raag Bhairavi and raag Nalinakanthi. The audience was blown away by his renditions and style of singing. Dr. Ram Sriram accompanied; a talented mridangam artist, he has received the Kala Seva Mani award from the Cleveland Aradhana Committee for his lifetime services to arts and music. Papanasam K. Gokul accompanied on the violin; Mr. Gokul has accompanied several well-known Carnatic musicians and is also a recipient of many prestigious awards. The audience thoroughly enjoyed the beats of the mridangam and was amazed at the technique and virtuosity in the violin playing for the Carnatic style of music. 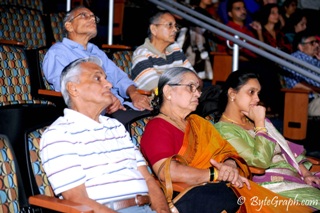 Filling the second half of the evening was the jugalbandi (meaning "entwined twins"), a duet of two solo musicians either vocal or instrumental, where the musicians perform together on an equal footing as lead players, and with a playful competition between the two performers.

Shri Pritam Bhattacharjee and Shri Salem Sriram’s jugalbandi consisted of raag Ahir Bhairav (in Hindustani style) and raag Chakravaham (the equivalent raag in Carnatic style). Pritamji sang the bandish “Aaj To Anand Anand,” and the bandish/pallavi “Bhaj Govindam” was sung by Salem Shriramji. A ragamala followed in which both vocalists engaged in tossing combinations of notes and rhythmic patterns to each other, with the violin participating. This was followed by a jugalbandi of the two percussion instruments, tabla and mridangam. Together, the musicians created improvisations that were extremely melodious and pleasing to the ears. The audience was delighted as the artists ‘talked’ to each other through their music—be it vocals, percussion, or violin. 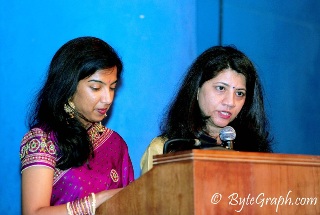 Emcees Anjali Nagrani and Madhu Deshmukh.
Given the awe-inspiring performance by these talented musicians, the audience broke into spontaneous applause several times in appreciation. The attendees comprised a diverse group of music lovers of both styles of Indian classical music. Some were students of music, while others were music enthusiasts from across Indian and non-Indian communities. With India being the only country in the world that has two distinct forms of classical music, it was an excellent and a unique opportunity for all to listen and enjoy such great musicians, as well as gain knowledge of the two different forms of Indian classical music. The concert ended with a standing ovation to the artists. 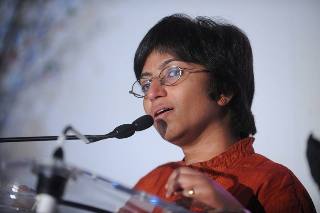 Special message from Dr. Sunitha Krishnan, founder of Prajwala (www.prajwalaindia.com), beneficiary of Sangeet Sangam concert:
"Sexual violence and sex trafficking of women and children is the worst form of human rights violation. So long as these two exist, there cannot be any lasting peace anywhere in world. We need to respond, we need to create a community that is zero tolerant to these crimes. For most people, this is a crime that can never happen to them. Please do not wait till it happens to you or somebody who is dear to you ... respond now...so that no child…no woman...no human being is violated." Please see www.prajwalaindia.com.