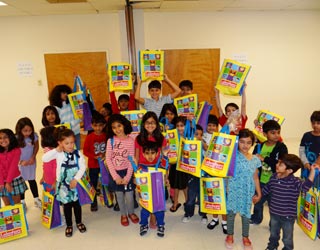 The South Asian community of Atlanta has been expanding into northern suburbs of Marietta, Smyrna, Kennesaw, and parts of Alpharetta. However, as there are no temples yet in this geographic region offering regular educational activities for South Asian American youth, a parents’ network was formed by Reshmi Hebbar and Frini Shah in East Cobb, Marietta in the spring of 2011, based on elementary-aged children who have at least one parent of South Asian origin, to meet the children’s cultural needs.

SAPNA, or South Asian Parents of Northwest Atlanta, fosters cultural awareness in these young minds by exposing them to South Asian traditions on a regular basis, primarily through a monthly, parent-led “Sunday School,” and also through the community observance of two to three cultural festivals (such as Holi in the spring and a family Navratri garba in the fall) each year.

Some of the children are from families of bicultural marriages with non-South Asian parents and need a language to talk about South Asian American identity today and the traditions of India. Many of SAPNA’s parents are from different parts of the diaspora, and most but not all of them are second-generation Indian immigrants. As opposed to other educational programs in the area that focus on weekly language training or religious instruction, this monthly school emphasizes educating from a bicultural perspective, focusing on cultural inclusiveness while promoting flexible ways in teaching the traditions of our diverse backgrounds and heritage. Each parent member volunteers to teach one lecture a year. SAPNA currently has 30 families as members and is growing.

For the past two years, a class has been held in January on Gandhi (in honor of India’s Republic Day and because of MLK’s birthday). Betty Garrot and Shefali Chandari taught the kids (ages 5-10) about the simplicity-based heroism of Gandhi and values such as inner strength, passive civil resistance, and the power of nonviolent action. This year, a connection was added with an ongoing South Asian charitable project. SAPNA parent Monica Khant, executive director of GAIN and a Raksha board member, and Rita Garcia, a counselor involved with Raksha, found that many of the abused women who seek Raksha’s services arrive with their children and very little else. So SAPNA children assembled care packages of toiletries and sundries (bandaids, toothbrushes, sippy cups, etc.). Local dentist Dr. Rina Mehta donated the tooth care products.

These mostly suburban, privileged children were introduced to the idea of suffering in ways they could understand. Teachings on “needs” versus “wants” helped. Then a bridge was laid between Gandhi’s ideals of service and simple living and the difficulties experienced by some South Asian children in Atlanta who lead different lives from us. This service project was an important beginning in taking SAPNA’s monthly cultural school into the world of necessary social action.