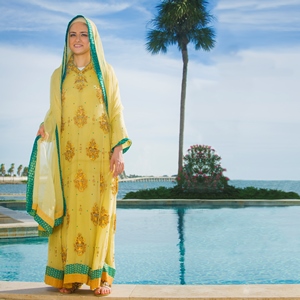 Dr. Kulsoom Abdullah, with a PhD in Computer Science, is now a campaign role model for the education of girls. (Photo: Saris to Suits®)

Olympian weight lifter Dr. Kulsoom Abdullah is an Atlanta-based Pakistani-American with a PhD in Computer Science from Georgia Tech. She wowed those attending a ladies fashion show event with her speech, emphasizing not only the importance of education but also the inclusion of women, and religious tolerance in athletics. The fashion show held on April 26 attracted several hundred people to the Renaissance Atlanta Waverly Hotel and Convention Center. This fourth fashion show was again hosted by the Georgia Chapter of the Association of Physicians of Pakistani Descent of North America (APPNA). 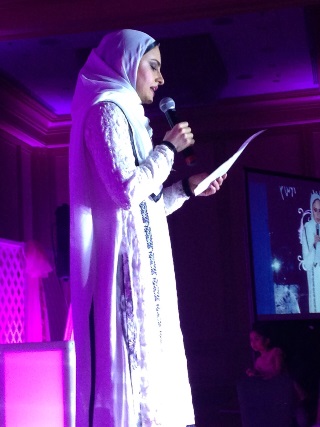 Dr. Kulsoom Abdullah (left) and CNN Digital reporter Moni Basu are Atlanta role models in the international awareness initiative for empowerment of women, founded by the first and only South Asian to anchor for CNN, Patti (Pratibha) Tripathi, who is the Founder of the charity named Saris to Suits (™). The campaign is helping SMART Moves (Skills Mastery and Resistance Training) program of the Boys & Girls Clubs, as well as girls rescued from sex trade and trafficking in India.

"Garments such as ‘saris’ or ‘suits’ do not make a person more or less empowered,” said Patti, who was born near the Nepal border in UP. “Rather, the trademarked brand implies that these savvy and worldly women travel fluidly between continents, chasms, and communities AND serve as real-life role models for young girls and women."

Olympian weight lifter Dr. Kulsoom Abdullah has fought for the inclusion of women, and religious tolerance in athletics. (Photo: Saris to Suits®)

Dr. Abdullah had to fight and persevere to weightlift competitively wearing her hijab. A documentary named The Pakistan Four was made about her and three other women who are redefining the narrative of the Pakistani Muslim woman. She has two photos in Saris to Suits’ 16-month colorful 2015/2016 calendar which features 14 South Asian American women serving as role models for girls and young women. Atlanta-based nonprofit Raksha is one of the national and international beneficiaries. 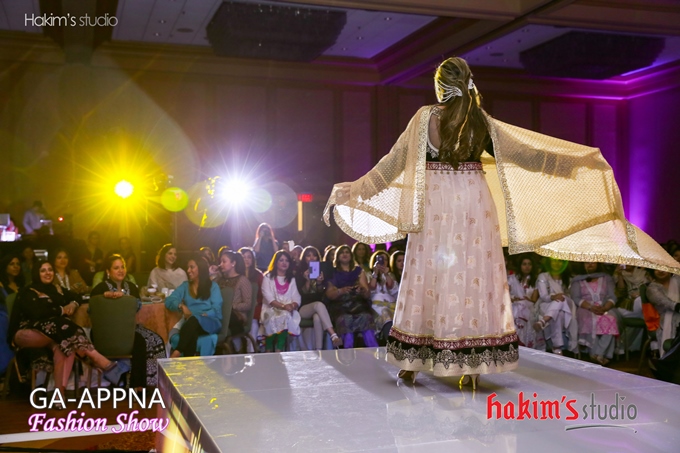 The well-attended fashion show began with a bazaar and hors d'oeuvres, followed by catwalk with unique fashions, jewelry, and South Asian fusion designer items, and culminated with special celebrity speakers and high tea. 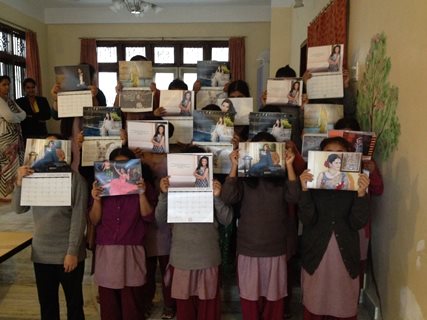 The Saris to Suits campaign features a calendar to inspire girls, like these girls rescued from child trafficking and sex trade and who are receiving rehabilitative care in Assam, for education and empowerment. (Photo: Saris to Suits®)

“It is a saying of the Prophet Muhammad that ‘a mother's lap is the first school for a child,’” said India-born event Chair and organizer Asra Ahmed, who is the wife of Pakistani-American cardiologist and President of Ga-APPNA, Dr. Mirza Ahmed. “With this in mind and the sayings of my grandmother that ‘education is the key to success,’ I am a strong believer in educating every child and especially in educating the girl child.”

GA-APPNA plans to benefit ICNA Women's Shelter for women of all backgrounds, Saad Abubakar Foundation for special needs children in the Atlanta Community, Clarkston Health Clinic for the underprivileged of all backgrounds, and DIL for females in Pakistan.

Proceeds from the Saris to Suits calendar (available from APPNA in Atlanta or from the website SarisToSuits.org) will now also help those displaced by the Nepal earthquake.