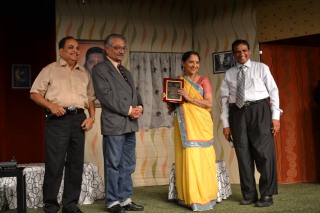 Atlanta’s theatre-lovers were treated to a hit Gujarati comedy when “Tu Chhe Lajawab” came to town. The play was organized in Atlanta by Mustafa Ajmeri of Global Entertainment and Media Services and Bhavna Modi of Manpasand USA, with cooperation of Gujarati Samaj, Atlanta, at the Sardar Patel Bhavan, on Friday, April 27, 2012.

Mustafa Ajmeri had thought of bestowing a Gujarat Gaurav (Pride of Gujarat) Award to the play's star, Sarita Joshi for her over 60 year contribution in the world of theatre (especially “Santu Rangili”), television soap opera (Baa, bahu, aur baby), and cinema (Guru). He had specially invited Madhu Rai to Atlanta to present this award. Rai is an eminent Gujarati author, playwright, novelist, and columnist for Divya Bhaskar newspaper. He was born in Jamnagar, Gujarat, grew up in Calcutta, and later moved to Ahmedabad. He now resides in New York. He has written highly popular plays such as “Santu Rangili,” “Kumar ni Agashi,” and “Khelando,” and a novel in English, Kimball Ravenswood. Rai has received several literary awards including the Ranjitram Gold Medal in 2000. He has recently launched his own Gujarati magazine, Mamta, which will publish stories from well-known writers. The Indian National Theatre (INT), formed by the late actor and director Pravin Joshi, staged Rai's plays, which raised Sarita Joshi’s name and fame in the Gujarati theatre.

Madhu Rai flew in from New York as chief guest for this event, and Ramesh Pandya invited him and Mustafa Ajmeri to the stage. Mustafa told the audience that the famed playwright Rai and seasoned thespian Sarita Joshi have known each other over a long period and it was heartening to see them here after a decade. “And now, we have a surprise in store for Saritaben,” and a plaque was presented to Sarita.

Thanking all for the award, Saritaben said, “Of course I am an artiste, but I owe it all to the writers like Madhu who have kept me alive through his command of the Gujarati language, his many well-crafted plays, especially “Santu Rangili,” his character portrayals, sharp and unforgettable dialogues, and so on.” She recited a few memorable dialogues of “Santu Rangili.” She then lauded Mustafabhai, saying, “In Atlanta, we have Mustafa, ‘don’t-worry Mustafa,’ who is also an artiste, who has kept all the performing artists and performing arts alive through his innate love and kind-heartedness. On behalf of all the artistes, my respectful salute to him.”

The play began, showing a middle-class family of film-financier D.P. Mehta (Bakul Thakrar), his wife Kaumudi (Sarita Joshi), college-going daughter Tanwi (Ashwini) and younger engineer brother Prashant (Vikram Mehta), along with long-serving domestic help cum cook Raghu (Jai Pandya), in Mumbai. Hard-working but exhausted Kaumudi, affectionately called ‘Moti,’ dutifully carries out all the daily chores while dreaming of going on a vacation once Prashant gets married. She expects Prashant to marry her younger sister but Prashant springs a surprise by marrying Rashmi (Shruti Gholap) instead. Rashmi is from a well-to-do family with servants so is untrained and unwilling to carry out the demanding chores. 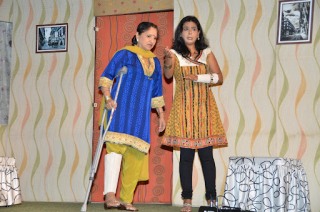 Before she and Prashant take off for their honeymoon, Kaumudi gives her a long ‘to do list’ and also various keys (except the safe’s key!). Then Kaumudi decides to take a break, too. In their absence Raghu is over-worked and overstretched and threatens to resign unless he gets an assistant! Prashant and Rashmi return from their honeymoon but lazy Rashmi fakes injury to her hand (I fell from a horse!) expecting to be excused from domestic chores. But in the ensuing hilarious scene, Kaumudi limps in with the help of a crutch! (I fell from a horse!) Looking at Rashmi, she quips, “You returned from Paris with your hand in plaster of Paris, and I am back from Palitana with my foot wrapped in Palitanano pato” (bandage). After both Kaumudi and Rashmi’s fake injuries are exposed, they try to outwit each other in passing on the household responsibilities.

In walks the Mehta family’s spiritual Guru Baba (Hemant Bhatt who later has the role of family physician Dr. Desai) to restore peace, advising Rashmi, “Instead of defeating someone, it is better to win over someone.”" Baba then advises Kaumudi to perform a special pooja which has an unintended result due to Rashmi’s mischief. Moti turns into a school girl! She wows the audience in this role, donning a school uniform and waving a tricolor to “Vande Mataram.”

While Moti is unwell, Rashmi tries to cope with the house chores but soon realizes how inept she is. Moti rubs salt in the wound with her ‘Have a nice day’ remark. The jovial, backslapping family doctor comes to the rescue, when he informs the family of Rashmi’s pregnancy. The family is overjoyed. Moti tells Rashmi that she wanted to teach her a lesson, that mere education is not enough. Besides education, it is important to have feelings, love, respect for faith of others, and willingness to bond with the family, without having unreasonable expectations. The play ends on a happy note.

A raffle with prizes was also enjoyed by the audience.

This comedy was produced by Kaustubh Trivedi, directed by Vipul Mehta, and co-written by Aslam Pervez and Nilesh Rupapara. Stage lighting and musical score were managed by Mehul Joshi.