Seminar on Growing Opportunities for Manufacturing in India 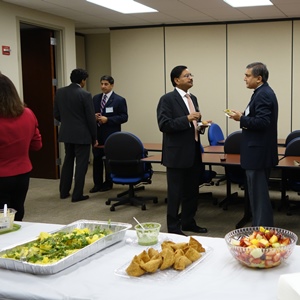 A half-day seminar on “Growing Opportunities for Manufacturing in India” was presented by the USA India Business Summit in partnership with Georgia Tech CIBER, Habif, Arogeti and Wynne, LLP (HA&W) and other supporting organizations, on December 8, 2014 at the offices of HA&W in Atlanta. 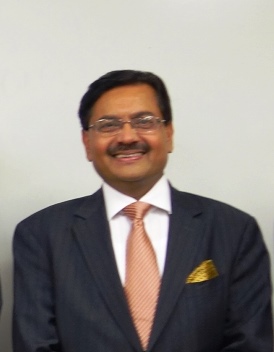 The Honorable Ajit Kumar, Consul General of India, Atlanta presented a film and described Prime Minister Modi’s “Make in India” campaign, with its attitudinal shift designed to make India attractive as a manufacturing country. Major industrial policy changes are being made by the government to attract foreign investment. Giant industrial corridors featuring high-speed trains and superhighways are being planned to grow supporting infrastructure and connect smart cities. Low labor cost per hour for manufacturing will also prove to be an asset for India in the coming years.

The Consul provided detailed statistics on current and projected production and export of items such as cars and textiles, diamonds and jewelry. India supplies 40 percent of over-the-counter and generic prescription drugs consumed in the United States. Ties with the US are being highlighted: it is the first time a US president will be chief guest at India’s Republic Day, and President Obama will be the only sitting US president to visit India twice during his tenure. The US is also a partner country in the Vibrant Gujarat Conference.

Numerous questions from the audience were answered. As defense materiel is ordered from the US, collaboration allows India to get technical knowledge and develop production facilities in India. The PM has met with chief ministers of all states to influence them to cooperate so that foreign businesses should meet fewer obstacles. Small scale manufacturing, the backbone of India, makes India proud: special economic zones and tax breaks are set up for industries. The effect of free trade agreements was discussed. Businesses were invited to contact the consulate for help.  [For further figures and statistics, please see the bottom of the report, under Website Bonus Features.] 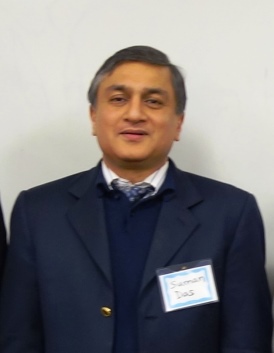 Three speakers then made fascinating presentations on their companies. Dr. Suman Das, Chair in Mechanical Engineering at Georgia Tech, described 3D printing and additive manufacturing processes and pointed out the huge potential for Indian industry and healthcare. Since India is already expert in computer sciences, and 3D printing begins with software and computer modeling, the stage is set. Also patents have run out on several of the 7 technologies used, so additive manufacturing will change in the next 3-8 years with innovative entrepreneurship. Examples: Parts will be made on site rather than ordering and storing, improving management; Part count and weight of products will be reduced, improving products. Benefits: tool-less manufacturing, on demand, small lot size great for biomedicine and aerospace, customization, etc. Everyone’s paying attention and will enter the field, he says. The challenge for the US however, is the workforce, finding enough trained people, comfortable with both computers and materials, to run the machines—but India should jump on it. 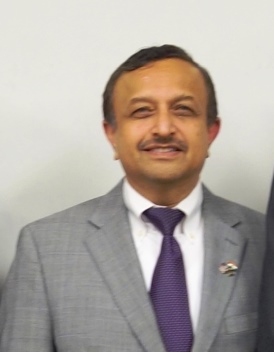 Abhay Paranjape then described Lockheed Martin’s projects in India, from working on rice cookers for villages, to partnering with Delhi university students on unmanned aircraft (university relations being the key to succeed in the long term), and the joint venture with Tata of building and manufacturing in India—a fabulous and invigorating venture. India’s skill in jugaar and reverse engineering, was noted. 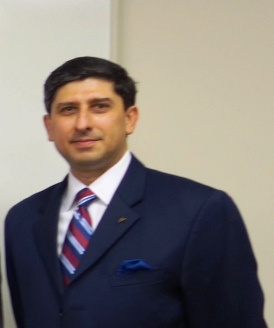 Hoshi Daruwalla (right) told the history of AAF International, “the air filter company,” from its early days helping the paint on Ford’s cars remain glossy during application, to today, being one of two companies that make fiberglass. AAF filters were used on the first lunar landing, 3-Mile Island, vital for people, processes, and the environment. Its standards are used by ASHRAE. It will be shaping the industry again as Teflon is used in filters vs glass. Now owned by Japanese Daikin, AAF is trusted in India as responsible and environmentally friendly. “If you’re going to sell in India, please make in India,” he concluded. 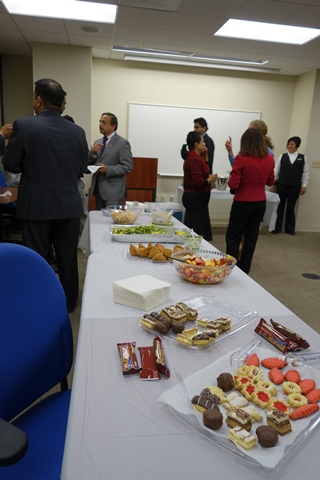 Treats for the palate as well as the mind.

Commercial Wing
Published on Oct 17, 2014
The ‘Make in India’ campaign is a major national program, officially launched by the Hon’ble Prime Minister of India on 25 September 2014, with the objective of promoting and facilitating investment in the manufacturing sector in India, fostering innovation and making India an important global manufacturing hub. This is sought to be done through the introduction of policy directives that – (i) improve the ease of doing business in India; (ii) enable manufacturing – including through skill-development and development of industrial infrastructure; and (iii) allow FDI in key sectors such as defence, railways and construction. The Government has specifically identified 25 sectors under the ‘Make in India’ programme. For more details regarding the various sectors visit the official website, MakeInIndia.com.
The Government has devised a ‘Five Pillar Strategy’ for facilitating investment under the Make in India Programme. These are: (i) Development of industrial corridors, industrial nodes and smart cities; (ii) Growth in manufacturing and employment-generation through the development of National Investment and Manufacturing Zones (NIMZ)’s under the National Manufacturing Policy; (iii) Energy sufficiency and ensuring uninterrupted supply of fuel to the manufacturing sector; (iv) Skill development and; (v) Improvement of business environment through simplification of processes and the increased use of digital technology.
The ‘Make in India’ programme provides several opportunities for the intensification of commercial collaboration between India and France, including in areas such as defence production, urban development and infrastructure.
The business round-table on ‘Make in India’, organised jointly by the Embassy of India in Paris and MEDEF International on 26 September 2014, was attended by a significant number of French companies who expressed their interest in collaborating with Indian partners on several sectors identified under the ‘Make in India’ programme. The Embassy is working with MEDEF International to identify and facilitate partnerships in the identified sectors for mutual benefit. https://www.youtube.com/watch?v=EiRtSTNyh8s

Statistics and details excerpted from Consul General Ajit Kumar's presentation:
PricewaterhouseCoopers had recently in a report stated that India had the potential to achieve a 9% growth rate and become a $10 trillion economy by 2034 on the back of concerted efforts by the corporate sector and a constructive role played by the Government.
The quarterly figures of April-June 2014 of GDP was 5.7%, the highest in the last two years. Industrial growth in general and growth in the manufacturing sector in particular has shown significant improvement with growth rates becoming positive as compared to negative growth rates in these sectors in the corresponding period of 2013-14. FDI inflows have increased by 75 % over the corresponding period in previous year.
Shares of Indian stocks to a record high as the Sensex index gained 35% so far in 2014 making it one of the top performers in the world.
Wall Street Journal recently reported that… money managers had poured US$ 16.5 billion into Indian stocks because they were betting that Mr. Modi would introduce policies to jumpstart India’s economy, boosting profits at companies ranging from banks to cement makers.
India’s GDP would grow at a faster rate among the BRICS. Also IMF predicted that its GDP growth would reach 6.4% in 2015 from 5.6% this year.
Prime Minister Modi’s Government had liberalized foreign direct investments in key areas like railways, defence, insurance and had introduced labour reforms. It is focusing on ease of doing business.
… projects like Delhi-Mumbai Industrial Corridor (DMIC), featured in KPMG’s 100 most Innovative Global Projects as one of the world’s most innovative and inspiring infrastructure projects, seeks to create a strong economic base with a globally competitive environment and state-of-the-art infrastructure to activate local commerce, enhance investments and attain sustainable development. DMIC is being developed as a global manufacturing and investment destination utilizing the 1,483 km-long, high capacity western Dedicated Railway Freight Corridor (DFC) as the backbone.
…
Success Stories
In manufacturing, for example, in the auto sector, India has major auto companies of the world investing in India and has become a manufacturing hub for small cars. In fact, India expects to double its exports to $24 billion to emerge as world’s largest exporter by 2020. Ford have plans to invest $1 billion in a new car plant in Gujarat also for export purposes. Similarly, in the field of textile, the industry is going to become $500 billion in the next decade and India will emerge as among the top exporters of textiles. Also, in the field of pharmaceuticals, it is the world’s largest supplier of generic medicines. Similarly, for diamonds and gems and jewelry sector. In fact, there are several fields in which investments can now be made for manufacturing in India.

India-US Relations
… The trade between our nations has increased five-folds since 2001 to $100 billion. In September meeting, PM Modi and President Obama had committed to increasing trade to another five fold to $500 billion which will create thousands of jobs in India and US. For example, in the defence field, the US has become the largest supplier of defence equipment in the last 3 years and active discussions continue in identifying avenues for co-production and development. Already some items for heavylift C130J aircraft are being produced by Tatas in their joint venture with Lockheed Martin in Marietta.
Since Prime Minister’s visit to US in September, several key meetings have been held which would expand the cooperation between India and United States also in the field of manufacturing, for example, India-US Trade Policy Forum met in Delhi last month to deepen bilateral engagement across the sectors. The delegation led by US Trade Representative Michael Froman showed keen interest in the progress of Make in India and Digital India programmes. Also a Memorandum of Understanding was signed between Ministry of Finance and the US Commerce Department to establish an infrastructure collaboration programme. A senior officer would now chair a panel to facilitate all US investment into India. US and India resolved an impasse over food security issues under WTO resulting in first-ever trade facilitation agreement at WTO which is expected to increase trade by $1 trillion.
The U.S. government had welcomed India's offer for U.S. industry to be the lead partner in developing smart cities in Ajmer (Rajasthan), Vishakhapatnam (Andhra Pradesh) and Allahabad (Uttar Pradesh).The Prime Minister would welcome two trade missions in 2015 focused on meeting India’s infrastructure needs with U.S. technology and services.
US-India Smart Cities Conclave was held last month in Delhi in line with PM’s plan to create 100 Smart Cities in India. An MOU has also been signed between Indian Renewable Energy Development Agency and the US Export Import Bank to cooperate in the clean energy investment. US was the partnership country at the Technology Summit last month and it would be the partner country in Vibrant Gujarat on January 11-13, 2015.
CISCO, the world’s largest computer networking company plans to invest $1.7 billion in “Digital India” drive of PM Modi. … Foreign exchange reserves are now at the highest level and the low international prices would result in India’s GDP being assisted by nearly 1.2% of GDP.