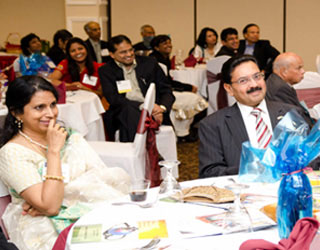 Photo: Atlanta Consul-General Ajit Kumar laughs along with the audience.

Over 100 members attended the Atlanta Regional Meeting and gala banquet of the Georgia Association of Physicians of Indian Heritage (GAPI) at the Ashiana Restaurant on Saturday, December 3.

Medical students and young physicians manned the registration desk. Dr. Indrakrishnan, gastroenterologist and GAPI Treasurer, and the event coordinator, recognized the past GAPI Presidents, 11 of whom were present. GAPI President Dr. Dilip Patel spoke about GAPI’s history and its evolution from a social networking group to a vibrant organization with over a thousand members playing a commendable role in deserving charitable causes, community service, and education over the past 25 years.

Scott Commander was the first speaker, an experienced trial attorney specializing in the trial of complex medical malpractice cases. In a compelling speech, he explained “How to Reduce Your Risk of Being Sued,” addressing the Four C's of Risk Management: Compassion, Communication, Competency and Charting. He also drew on past experience as a plaintiff's medical malpractice lawyer and gave the GAPI audience a view from the perspective of the patient considering the decision to sue for malpractice, attempting to dispel some of the myths about medical malpractice lawsuits.

The second speaker, Jeffrey Segal, MD, JD, attorney and neurosurgeon, has established himself as one of the country’s leading authorities on medical malpractice and on online defamation of doctors. In his riveting speech, he first addressed frivolous lawsuits and explained what tools can be used to address them. Then he switched the presentation to the explosive emergence of online reviews of physicians, the challenges, and what can be done to level the playing field. Online reviews are often anonymous. Doctors are foreclosed from responding because of HIPAA. And the average rating site only has 3-4 reviews per doctor, hardly representative of the doctor’s practice. Amidst resounding applause Dr. Indrakrishnan presented appreciation plaques to both the esteemed speakers.

Chief Guest, Hon Ajit Kumar, Consul General of India in Atlanta, has come to us from Germany, where he served as Consul General of India in Frankfurt from 2007 to 2011. He complimented GAPI for their several voluntary activities. He spoke of the remarkable transformation in the last decade in the Indo-US strategic relations. He lauded the Indian-American community for being a vital bridge and catalyst in this change. He elaborated on the cooperation in areas such as trade and economics, defense and security, education, science and technology, civil nuclear energy, space technology and applications, clean energy, environment and health. People to people interaction has provided vitality and strength, with regular contacts at political and official levels and a wide-ranging dialogue on bilateral, regional and global issues established.

Following the excellent talk by Hon. Ajit Kumar, Dr. Indrakrishnan presented a commemorative plaque to him and quipped that he received a plaque from Hon. Ajit Kumar only a month ago bestowed by Greater Atlanta Tamil Sangam as 'person of the year 2011,’ but this presentation to Ajit Kumar was not intended to be tit for tat! The quip elicited laughter and applause from the attendees!

GAPI board of trustees and secretary for Medical Association of Georgia, Dr. Manoj Shah encouraged GAPI members to join MAG, the only state-wide physician organization which looks after the welfare of physicians in a multi-faceted manner.

Dr. Sreeni Gangasani spoke about the progress and challenges of the free GAPI clinic at Global Mall which is held every first Saturday of the month from 1pm to 4 pm for uninsured Georgians. He requested physicians to volunteer their services at least once a year, and more physicians signed up after his persuasive plea.

Following a sumptuous dinner, Ms. Grace Puri, CFP from Ameriprise Financial, the largest financial planning company in the country and a sponsor for this meeting, generously presented a check to Ms. Gayathri Indrakrishnan, CPA for GAPI, to help run the GAPI free clinic. Chris Reynolds, CFP, and Grace Multani, CFP, presented an informative and engaging seminar on the merits of Comprehensive Financial Planning: a documented financial plan that lists one’s goals and dreams combined with the strategies to implement them is critical to one’s fiscal health.

Fun time included a raffle, with amusing surprise mystery prizes! The evening concluded with a vote of thanks to all involved, for a splendid evening!