Home > Magazine > Around Town > ‘Serve It Up for the Children’

‘Serve It Up for the Children’ 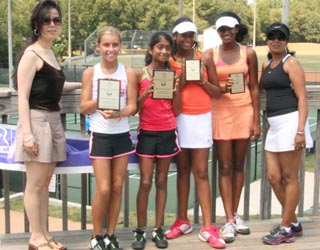 A tennis fundraiser tournament hosted by AID (Association for India’s Development) Atlanta began on a clear, mild Saturday morning with 52 enthusiastic players. Among them were 16 junior players varying in age from 8 to 14. The event started with the National Anthem followed by a warm welcome address by chief guest Mr. Chand Akkineni. He educated the junior players about the importance of giving back to the community.

The first serve was made by a junior player Meghana Sridhar. There was a beaming energy among all the players and fellow players were cheering them on the sidelines. In the Junior Doubles category, Meghana Sridhar and Camille Steyaert, after winning their first two matches, played their final match against the sister duo Priya Sinha and Maya Sinha and won the championship 8 - 3.

In the Men’s Doubles Sarat Ramayya and his partner Deval Patel won the championship against Jay Joseph and Virgis Johnson. The Women’s Doubles champions were Princess Forbes and Justina Jefferson. They played against Julie and Janet Jenkins in their 3rd round. Janet had flown from California on Friday evening to visit her sister in Atlanta and Julie had made a deal earlier with her that she had to partner her for this charity event. She told us that they were playing doubles together for the first time in 25 years. “Way to go, Julie and Janet!”

In Mixed Doubles the couple Sharon and James Sims won their championship over Syed Naqi Rizvi and Nancy Jones. The event was well received by all participants, and they wanted AID to conduct more of these events.