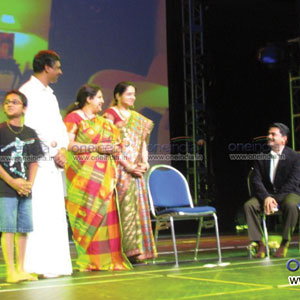 There is such a thing called Kannada flavor. In the 90’s at a reputed engineering college in Bangalore, less than 20% of the student body was Kannada. Still, it was easy to identify them. They were invariably gentle, soft-spoken, kind hearted, and hardworking. Authentic Kannada qualities that were on display at the very well organized 7th annual AKKA—Association of Kannada Kootas of America—Kannada Conference held in Georgia International Convention Center, Atlanta from Aug 31st through Sep 2nd, 2012, and hosted by Nrupathunga Kannada Koota of Atlanta.

Coconut vendor at the conference.

At the traditional banana and coconut branches’ enclave at the entrance stood friendly young women dressed in traditional Kannada attire of colorful silk sarees with a waistband. All the convention rooms were named after eminent personalities from Karnataka. There was Amogavarsha Hall, named after 7th century Rashtrakuta king, author of Kavirajamarga, earliest known treatise of poetry in Kannada. Spanning through the centuries there were other personalities. Sir Mokshagundam Vishwesharaya, diwan of Mysore, responsible for the first hydro-electric plant in Mysore, the first such in Asia, had a huge room named after him.

The theme of the conference was “Karnataka’s Rich Heritage, Language, Art and Culture.” Her Excellency Nirupama Rao, Indian Ambassador to the U.S. was present, among many illustrious names, including Karnataka Chief Minister Sadananda Gowda, Kannada & Culture Minister Govind M. Karjol, business leaders such as Smt. Sudha Murty, Infosys Foundation Chairman, and many artists and authors. “I am Karnataka’s daughter-in-law,” declared H.E. Nirupama Rao in her inaugural address, adding that her growing up years in Karnataka had widely influenced her.

Smt. Sudha Murty shared her own experiences about changing public views about Indians in America and pointed out that Indians residing here were vastly responsible for this. She requested the crowd to continue to help the helpless and encouraged women to reach their full potential.

On the first day, the business forum had eminent speakers. Mr. B.V. Jagadeesh, Managing Partner, KAAJ Ventures, a successful serial entrepreneur in technology, a venture capitalist and philanthropist, spoke about building successful startups. Mr. Madhusudan, founder and CEO of VectorSpan Inc.—an enterprise focused on enabling companies to plan their growth/exit strategy, engineer inorganic growth, and make cross border transactions and integration successful—spoke about exit strategies for entrepreneurs. He is the Chairman of the Board of TiE Atlanta and has served as Chairman of the Board of the Georgia Indo-American Chamber of Commerce (GIACC). The law firm of KPBB made a presentation on Intellectual Property Rights; the talk was well received by the audience, and many questions were asked.

The medical forum included a number of Atlanta speakers. The charity forum included Vibha on Saturday and Atlanta’s Aparna Bhattacharyya for Raksha on Sunday. There were women’s, youth, literary, and spirituality forums, and a singles mingle. Sonia Dara appeared in the fashion show. 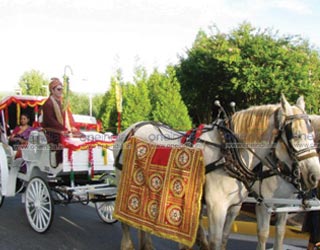 Cultural activities galore were presented by groups from around the U.S. and from India, including a colorful parade “Meravanige” with Folk Dance theme presented by all participating Kannada Kootas on Saturday Sep 1. Singing and dancing competitions took place, and cricket, chess, and carrom events.

Over 3,000 guests attended the convention. Program details may be seen at akkaonline.org. Competition winners and more are listed in Khabar’s Website Bonus Feature (below).