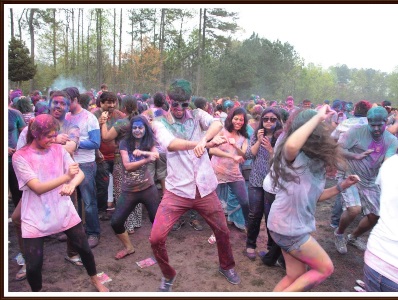 Atlanta youth having a lot of fun and masti at Sewa Holi 2016. (Photo: Kiran Mudigonda)

Atlanta celebrated Holi, the colorful Hindu festival which has people across the world digging their hands deep into heaps of colored powder, and smearing friends, family, and strangers with it! The festival was filled with fun, music, and masti, on Saturday, March 26, 2016 at Pinckneyville Park in Norcross, where a record number of over 2000 people gathered in spite of bad weather. 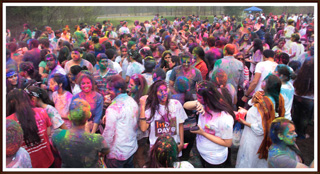 Sewa International USA-Atlanta has been organizing this festival at the same park since 2005. Over the last 11 years, the gathering grew from 50+ to close to 3000 people. Sewa International USA runs on the philosophy of “Vasudhaiva kumtumbakam” or “the world is ONE family.” Through this festival Sewa brings every culture, religion, and faith under one umbrella. Some of the other organizations Sewa partnered with this year were IFA, HSS, VHPA, Ekal Vidyalaya, Siddhi Vinayak Temple, Shiv Mandir, Rajasthan Association of Atlanta (RAJA), Greater Atlanta Punjabi Society, Shiv Yog, Art of Living, Isha, Indian Awareness Foundation, and AIM for Seva to bring the community to celebrate this vibrant festival together under one roof. 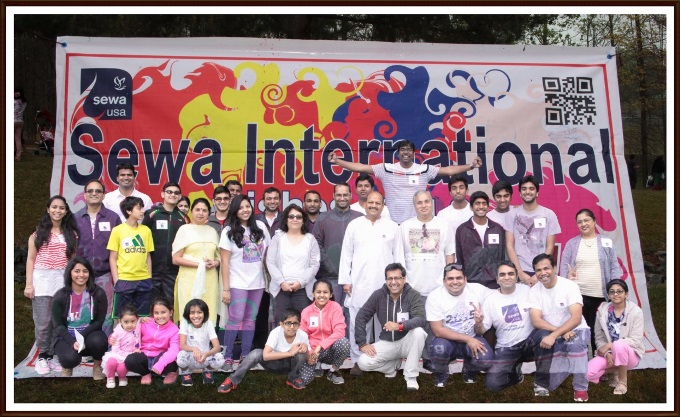 The morning of the 26th was cloudy. While the weather report showed that it would be 65F, it started raining. Volunteers who were prepping the ground for Holi were a bit worried as it is an open event and it was a bit cold outside. At 10am a very few people walked into the park. However, by noon the crowd started pouring in. DJ Yani (Shyam Brahmbhatt) kept the crowd on their toes with old and new hit dance numbers. Dance peformances by NetIP, Northview High School dance team, and others added energy to the event. The rain could not stop the enthusiastic crowd from having fun and they kept dancing with more energy. 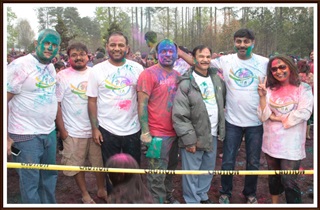 The team of sevikas (ladies volunteers) prepar-ed delicious home food. “We feel so fortunate to be cooking and serving homemade food to the attendees,” said Madhavi Gunasekaran, food coordinator for Sewa Holi for the last two years. IFA team successfully managed the parking. All the parking lots were full and an additional parking lot across from the park was used for the overflow. IFA team distributed free T-shirts to the crowd. HSS, VHPA volunteers helped with setup and logistics, Our Dholi Jazz’s awesome performance engaged the crowd in an amazing way. Official photographer Kiran Mudigonda did an awesome job clicking all the colors of this wonderful event that declares the arrival of spring. 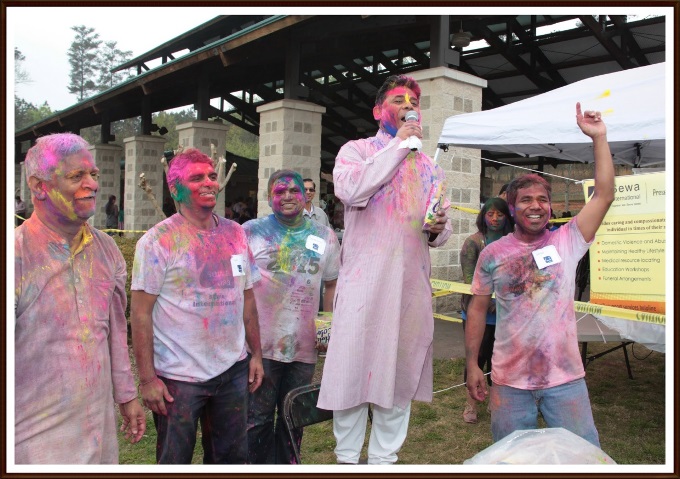 Chief Guest was Consul (Head of Chancery) Mr. D. V. Singh who graced the event with his daughter and her friends. Mr. Singh conveyed best wishes for Holi and said he is so glad to see the community celebrating together in such large numbers. 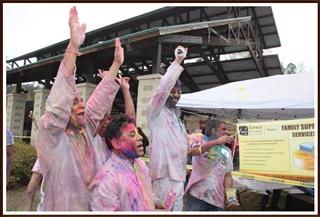 Sewa International thanks all the collaborating organizations and the community for their participation and support in making Holi 2016 a big success and fun filled event. There was a huge following on Facebook, post event, with many mentions of “the largest color festival of Georgia.”