Home > Magazine > Around Town > “Sham-E-Sangeet” raises over $86,000 for Ekal Vidyalayas in India

“Sham-E-Sangeet” raises over $86,000 for Ekal Vidyalayas in India 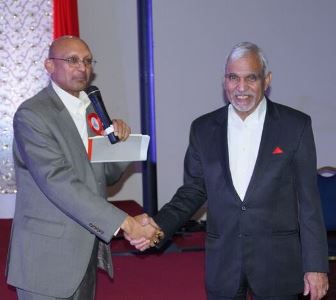 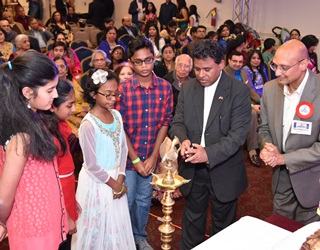 After a delicious dinner by Ashiana Restaurant, attendees were welcomed by Rina Gupta, Vice President of Ekal Atlanta, and Rachna Gupta, Ekal’s Cultural Coordinator. Shri D. V. Singh, Consul (Community Affairs), together with Shiv Aggarwal and winners of Ekal’s Literacyhero.com Championship (students fighting illiteracy), lit the traditional diya; this was followed aptly by “Saraswati Vandana,” a dance invocation to the Goddess of Learning. 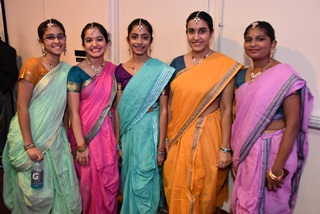 In keeping with the theme of the program, young singers opened with a popular prayer song, “Itni Shakti Hamein Dena” and followed later with “Saancha Naam Tera.” Divya Srivastava and her dance students mesmerized the audience with their intricate footwork, soulful expressions, nuanced emoting, and finesse and grace in Bollywood medleys and Lavani dances. 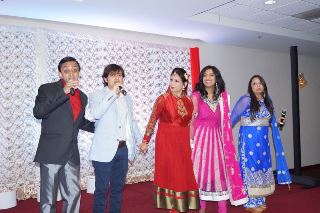 Busy IT professionals Pankaj Bhargava, Rekha Pallath, Saras Jain, and Bhavika Merchant from South Carolina lent their talent to the program for the love of singing and an innate interest in Ekal’s cause. “Kya Jaanoon Sajan” set the tone. “Prem Ratan Dhan Paayo,” “Aa Bhi Jaa,” etc. by Bhavika, Himesh Reshamiya’s cousin and garba singer from South Carolina, elicited rousing applause. Singer-songwriter Rekha, who has sung in a Kannada film Software Ganda, released a CD “Nasha”, and has been associated with Ekal for several years, had the audience humming to her melodious voice in songs, “Aapki Nazaron Ne Samjha,” “Muskurane Ki Vajah Tum Ho,” and “Lambi Judai.” Saras Jain, a Sangeet Prabhakar and trained Hindustani classical vocalist, opened with Rahat Fateh Ali Khan’s “Lagan Lagi Tumse Man Ki Lagan,” followed by “Jag Ghumeya”, and a medley of Arijit Singh’s songs in his captivating voice. Pankaj Bhargava, the music lead of Geet-Rung, was in full flow, opening with “Aap Ke Anurodh Pe,” and later singing Kishore Kumar and Kumar Sanu’s medleys. The duets were also well chosen and showed the versatility of every performing artist. The upbeat final medley of all-time favorites made the audience not only clap in rhythm but also join in dancing!

Ekal’s 2016 DVD highlighted its one-teacher school model, which exists in all the Indian states from Kashmir to Kerala for an annual sponsorship of only $365. Ekal currently runs 54,292 schools, each providing basic education to 20-30 students, and benefits 1.5 million rural children, with an almost equal boy-girl ratio. In the DVD, India’s Prime Minister Narendra Modi ji called Ekal “a very successful mission” and acknowledged the relentless work undertaken by Zee TV’s head, Dr. Subhash Chandra, for Ekal’s expansion. The Ekal program of free basic education for children has been expanded to formalized vocational training, social empowerment, and healthcare for adults, and thus brought about far-reaching changes in neglected areas of India. It is the largest grassroots nongovernment organization with chapters in Australia, Canada, Dubai, New Zealand, United Kingdom, and United States (42 chapters). Indian Minister for Human Resources Development Shri Prakash Javadekar has said, “Ekal’s is one of the most meaningful social impact works in the field of education.”

Once the audience had seen the huge social impact their monetary contribution would make, they vied to sponsor Ekal schools. Some gave anonymously. As soon as 100 schools had been donated by individuals, Shiv Aggarwal, Georgia Chapter President, announced that the number had been matched by a check for 100 schools ($36,500) from 27th Group, a real estate/restaurants management company run by Anil Damani, whose HR/PR Coordinator Prem Kaushal was present at the event. Ekal’s heartfelt thanks were expressed to him by Shiv.

“Shaam-E-Sangeet 2016” raised $86,000 for a record number of 201 schools in just 4 hours! Fifteen additional schools were pledged with the funds going directly to Ekal HQ, making it a total of 216 schools in one night. While every sponsor received heartfelt applause, thunderous claps went to four young children, Varoon, Veda, Isha, and Kunal, who had created art and craft work especially for Ekal. The sale proceeds of their creations helped sponsor a new school. With these schools, Ekal is slowly inching towards its goal of 100,000.

Shiv Aggarwal thanked VHPA for the much needed hot chai, and the artists, students, sponsors, donors, volunteers, and supporters for joining in, in the task of nation-building through Ekal.

Sponsors can track the progress of their school at www.ekal.org, can connect with Ekal on Facebook, and Twitter, too.

It was a well-organized, enthusiastic, engaging, much appreciated, and enjoyable program for a very worthy cause! 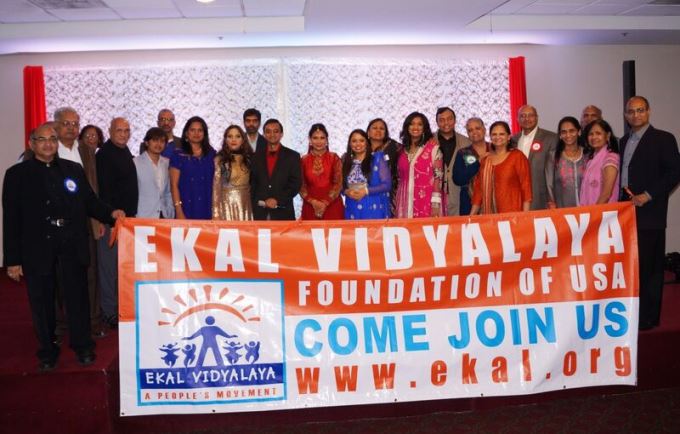