Home > Magazine > Around Town > Shanti – let the sensations wash over you

Shanti – let the sensations wash over you 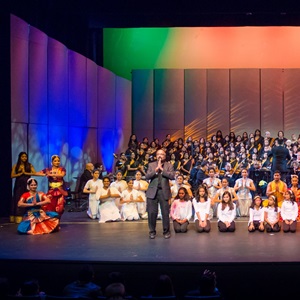 Not knowing what lies ahead is a great motivator, they say, but I’m not sure about that in this case. I had seen the show previews, read the shining reviews, and personally knew many of the Shanti performers. I was familiar with what was coming at Georgia Tech’s Ferst Center. But when the compère asked the packed audience to relax and let the sensations of the performance wash over us, I was piqued. The loud gasp from my young daughter at the hushed raising of the curtain echoed my emotions.

The show, in its 10th year, was meant to be Cincinnati-based composer Kanniks Kannikeswaran’s slant on peace, joy, and human communion. The might of Shanti’s message is in its execution—made amply clear by the introductory frame that struck me when the stage was unveiled: a perfect medley of lights, musicians, and singers. Instantly, I knew that this was not a typical story but a complex mosaic of tidings, tunes, and rhetoric.

From that opening image came voice. In that voice was lilting harmony. Embedded in that harmony was the force of Shanti, its gift to the audience. Boring into your every cell were sounds of Tom Tana Nanana and Gange Gange … elevating a routine autumn evening into a drizzle of chimes, of pure polyphony between raga-based choral music and traditional Western choir and orchestra. For me, three numbers—all of them a capella—Vismaya, Prayer for Peace, and Surya, stood out for their absolute melody. Like dramatizing our joy with claps and salutes, Shanti’s sounds were bedecked with classical treasures of Bharatanatyam, Kuchipudi, Kathak, and Odissi; its resonance was layered by Kanniks’ daughter, Vidita’s mellifluous renditions, and punctuated by Kanniks’ telling exposition of 5,000 years of Indian cultural history, the import of peace and togetherness, and the ruin-ravages of Ashanti.

I didn’t have to look into the pamphlets and notes to gather that this pioneering soundscape by Kanniks had already stirred thousands of hearts, and was a culmination of hours of practice and focus on details by Atlanta dancers and singers (Indian and Western) in league with versatile and gifted conductor Huu Mai. Sponsored by Raksha, a local organization that was the recipient of the event’s proceeds, and Deloitte (platinum sponsor) with support from IACA, the Atlanta coordinators ensured that Shanti was indeed the seamless delivering of a global message in a casserole of Indian-Western tenor and tones.

In speaking with the Shanti Atlanta coordinators, it was clear this grassroots volunteer effort was a demonstration of immense optimism: promotion of Shanti as a concept to the local market, recruitment of local talent, and a massive assembly of singers, musicians, and dancers. From trained artists to casual singers, the sentiment, just like on stage, was concordant: Shanti was not just a show, it was an odyssey.

Now, I have seen it, experienced it, and know what it offers. But if Shanti returns to a place nearby, I will close my eyes once again as the curtain rises and feel everything palpable wash over me like a dream I don’t want to wake up from.