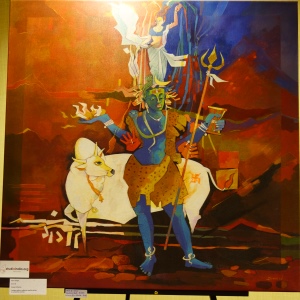 (Left) A painting of Shiva by Dinesh Sharma of StudioIndia.org, auctioned for Shiv Mandir's fundraiser.  (All photos: Suzanne Sen)

December 12, 2014 was a magical night: Shiv Mandir of Atlanta organized its annual fund-raising dinner at Holiday Inn on Holcomb Bridge Road to benefit the organization’s construction of a mandir. Consul General Ajit Kumar graced the event with his wife Margret and spoke to the 300 attendees. After a prayer from Pandit Gyan Praksh Ji of Shiv Mandir, the silent auction swung into action, followed by an excellent musical program and dinner. 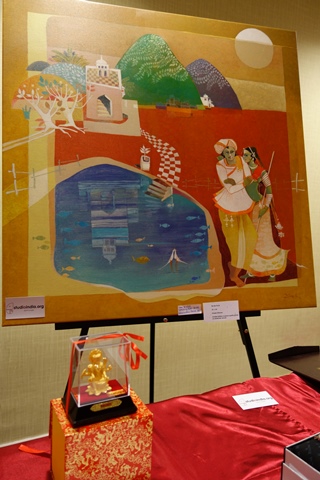 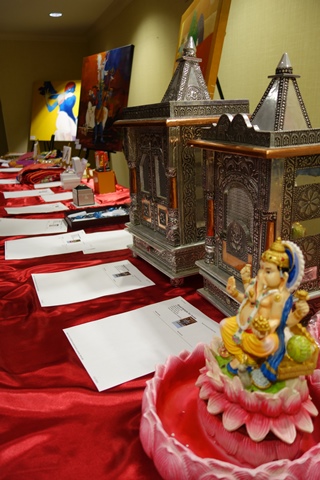 Auction items donated by the Atlanta community were displayed beautifully in the hall, including glittering Bawree saris and numerous superb paintings from Dinesh Sharma of StudioIndia.org. Eager guests could bid on their favorite items. Some contributed even before the program started. Mr. Jaydev Jani and Ms. Seema Jain emceed the program, keeping the goals in everyone’s mind. Shyam Gupta managed audiovisuals with three huge screens to display the entire program so that guests would not miss a moment. 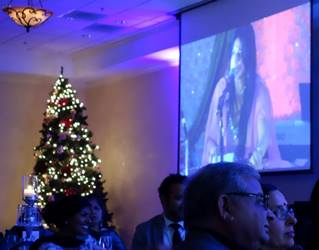 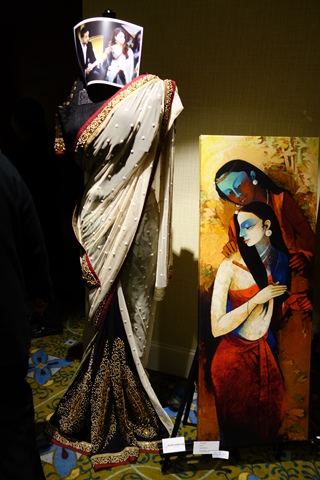 Sunny Duddilla, Chairman of Shiv Mandir, said that “Today I stand here in pride because of you and countless other volunteers who have over the years readily offered their services to Shiv Mandir…. [T]he actual physical building of our Shiv Mandir is not a distant dream any more…now it is just around the corner.” 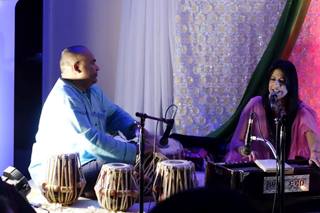 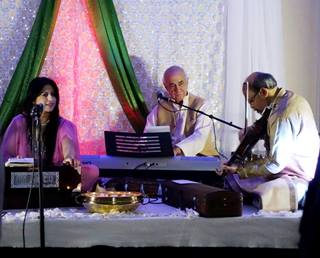 Nita Sardana, Board member and coordinator of the event, touchingly shared her experience with Hinduism, the importance of association with temples, and how thankful she was to be a part of the Shiv Mandir. She thanked Dr. Aarti Pandya and her group (Anjaneya Sastry on tabla, Amitava Sen on violin, and Abdul Ali Asani on keyboard) for not only performing but also becoming a part of Shiv Mandir parivar (family).

Ram Shahani, President of Shiv Mandir, was thankful for the encouragement received from many organizations and individuals whose generosity, zeal, and ever-smiling faces must be really contagious, he said, as he sees more and more people joining. “With your energy and Shivji’s blessings, this magnificent temple will be built soon.” The night ended with Shiv Mandir achieving and exceeding its goals for the fundraiser.

Link:
Dr. Aarti Pandya was one of three Atlanta-area women featured in the 2014 Saris to Suits Calendar.
• Dr. Aarti Pandya • A Gujarati eye surgeon, but also a classically-trained vocalist and musician.
• Lalita Balakrishnan • A Hindustani classical musician and a hip-hop producer who started her own Atlanta-based record label, lalTAAL.
• Sonia Moghe • A Marathi television reporter who lives in Buckhead.
Saris to Suits 2015 calendar sales and fundraising events underway to empower women, uplift those who are marginalized, and to inspire girls with real life role models to live their American dreams and stand up for justice. Primary beneficiaries are Boys and Girls Club of Sarasota County, Apna Ghar in Chicago, and Raksha in Atlanta.
http://www.tampabaynewswire.com/2013/12/08/saris-to-suit-2014-calendar-of-beauty-and-brains-turns-heads-role-models-rising-zero-tolerance-to-domestic-violence-sexual-assault-17826