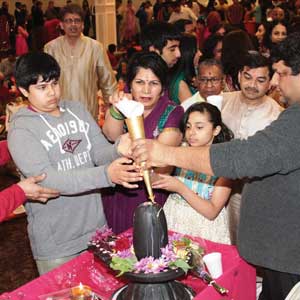 On a beautiful Sunday evening, March 10, 2013, Ashiana banquet hall was fully packed with almost 250 families clad in colorful traditional Indian clothes. They had gathered to perform Maha Rudrabhishekh pooja on the auspicious occasion of Maha Shiv Ratri organized by Shiv Mandir of Atlanta. Mahashivratri (the Grand Night of Lord Shiva) is a festival of significant importance for Hindus. It is believed that fasting and performing this pooja on Mahashiv Ratri with proper rituals allows one to attain moksha, relieved from the cycle of birth and death. 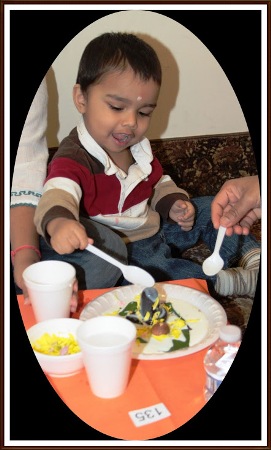 On the floor, first-come first-served, were 250 asanas for the devotees to sit and perform pooja. Essential pooja samagree, ghee, shivling, Panchamrit, etc. were provided. On a decorated stage (courtesy of Aayojan) Mandir priests Pt. Gyan Prakash Upadhyay Ji and Pt. Madhav Kafley Ji sat with the Mukhya yajmaans, guiding the pooja. Two projector screens, seating arrangements for seniors, a calendar, and souvenir were provided. Food was arranged for both fasting and non-fasting devotees.

Mandir Pooja Committee head Vijender Sharma welcome all, and Secretary Pushpraj Verma introduced the priests and the Mukhya Yajmaans. Pooja began at 5.30 pm with families, kids, parents, and some grandparents, together. Pranayaam was followed by a bhajan. The two-hour pooja was performed per vedic rituals with Swasti vachan, Ganesh Vandana, sankalp, dhyaan, avaahan, solah upchaar poojan, Vedic rudrabhishek, and 108 naam archana and aarti followed by Maha Prasad. Children volunteers replenished samagree. Devotees enjoyed the way pooja was conducted by the priests with bhajans sung in between by a group of ladies. While the group Maharudrabhishek pooja was being held on the ground floor, on the first floor over 5,000 devotees offered milk abhisekh to Shiv Limgum. Later, Prahar Pooja was conducted from 10pm till midnight in the Mandir.

Chairman of Board, Alok Gupta, briefs about Mandir budget and future plans: “God willing, we will celebrate next Shiv Ratri at our own place.”

Chairman of the board Alok Gupta gave a powerpoint presentation on finances and showed the image of the new Mandir and floor plans. The loan has been secured, equipment is at the new site, and construction will begin soon. Encouraging the devotees to donate and sponsor items for the new mandir, e.g. bricks, pillars, and murtis, he said “There are so many temples in India, but how many of us (or our relatives and friends in India) have had the opportunity to be a part of any of those Temples when they were being built? We are fortunate that we are getting this once in a life time opportunity to be a part of history, and so we must avail the same.” 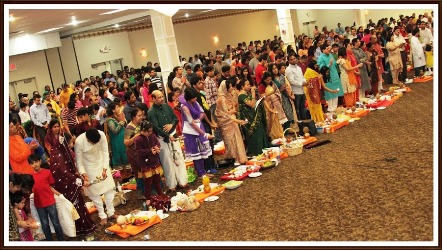 Executive Committee president Rajkishore Pathak thanked all and awarded certificates to youth volunteers. He requested support by Tan, Man and Dhan, hoping to “celebrate the next Shiv Ratri with everyone at our new Mandir site.”

Shiv Mandir, at its current location in Global Mall, Norcross, has catered to religious and spiritual needs of followers of sanatan dharma since 2000. The new Mandir, for which Bhumi Poojan was conducted in 2010, is on Peachtree Industrial Blvd, in Sugar Hill on 12 acres. Projected cost is $3.5 million for a 22,000 square foot complex with sanctum of 7,500 square feet, auditorium, community hall, onsite stream named Shiv Ganga with walking trails, and an outdoor yagna shala. To know more, visit www.shivmandiratlanta.org